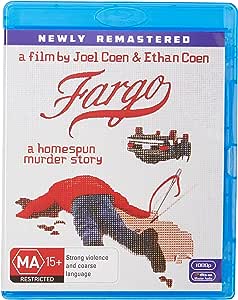 Newly remastered from 4K source elements for the best quality experience on Blu-ray. The “middle of nowhere” has never looked better in this new edition, now remastered for the best high-definition picture yet! In this film Nominated for seven OSCARS, things go terribly awry when small-time Minnesota car salesman Jerry Lundegaard (William H. Macy) hires two thugs (Steve Buscemi and Peter Stormare) to kidnap his wife so he can collect the ransom from his wealthy father-in-law. Once people start dying, the very chipper and very pregnant Police Chief Marge (Frances McDormand) takes the case. Will she stop at nothing until she gets her man? You betcha.

4.7 out of 5 stars
4.7 out of 5
1,461 global ratings
How are ratings calculated?
To calculate the overall star rating and percentage breakdown by star, we don’t use a simple average. Instead, our system considers things like how recent a review is and if the reviewer bought the item on Amazon. It also analyses reviews to verify trustworthiness.

E. A. Solinas
TOP 500 REVIEWER
5.0 out of 5 stars Yah yah, you betcha
Reviewed in Australia on 28 February 2018
Hollywood prefers to ignore the Midwest. When it is featured at all, its people are often depicted as either drooling yokels or simple yet wise folk who exist just to teach life lessons.

One of the few exceptions is "Fargo," the Coen Brothers' breakout movie. It's half kidnapping caper, half valentine to their home stage of Minnesota -- and despite the heaps of snow and the occasional dead body, it has a warm charm embodied in Frances McDormand's pregnant sheriff. This movie could have had no plot at all, and it would still have been fun.

Car salesman Jerry Lundegaard (William H. Macy) is facing financial ruin, so he comes up with a cunning idea: he'll hire a pair of loser thugs, Carl (Buscemi) and Gaear (Peter Stormare), to kidnap his wife so he can extract a ransom from her wealthy father. But things go awry during the kidnapping when Gaear shoots a traffic cop and the passengers of a car.

Unsurprisingly, the police are interested in what happens. Local police sheriff Marge Gunderson (McDormand) begins investing the murders and the kidnapping, interviewing prostitutes and chitchatting with an old classmate. But Jerry's seemingly-simple plot keeps spinning more and more out of control -- and as Marge gets closer to the murderers/kidnappers, the deaths just keep piling up.

"Fargo" is the perfect example of a quirky movie done right, mainly because... it doesn't feel like the Coens were trying to be quirky. Instead, it feels like they are pouring all their affection for their home state in one movie -- mostly the "Minnesota nice" (even the cops are pleasant and chipper!), the laid-back attitude and the eccentric sense of humor ("Ah, hon, ya got Arby's all over me!").

The charm only really lets up when things get violent -- brief spurts of death, cursing and big scarlet spatters against the snow. Perhaps that is because the murders themselves are the only part of the movie that the Coens don't have affection for.

But the murder scheme itself is fairly entertaining, simply because it becomes more chaotic with every step. On the other hand, the investigation is handled in an oddly laid-back way, so that the audience just sort of sits back and enjoys the journey with Marg. And wound around the main plot are a series of small, oddly memorable personal subplots (Marge's husband entering an important art competition).

This is one of Frances McDormand's best performances -- a mellow police chief who also happens to be seven months pregnant ("Now I'm hungry"), and can whip out a gun when she needs to. Marge is the complete opposite of all those tortured gritty cops, and that is part of the reason she's so lovable. The sing-songy Minnesota accent doesn't hurt either -- all those people speaking like that is music to the ears.

Despite lots of blood and murder, "Fargo" is a quirky, charming little movie -- and it lets you know pretty much how the Coens see Minnesota. Definitely a timeless must-see.

DRW
5.0 out of 5 stars Still good after 25 years? You betcha!
Reviewed in the United Kingdom on 27 April 2020
Verified Purchase
I was living in Minneapolis when this film was released. It came as a bit of a shock for the locals, seeing it the first time, especially when you knew where all the locations were filmed. The accents are over-emphasised somewhat to reflect how those from the Twin Cities (Minneapolis & Saint Paul) and out-state residents from NW Minnesota and North Dakota speak. Phrases like "yah" and "you betcha" are common for folk who grew up there - sometimes seen as a bit of a joke at themselves and their Scandinavian roots.

The film itself is well described in other reviews - few will forget the final scenes of the film and how it all ends. What I will add is some detail for the filming locations for anyone interested. The film is meant to be set in Fargo, although nothing was filmed there. Practically everything was filmed around Minneapolis and Saint Paul (known as the Twin Cities), but over the course of 25 years almost nothing is left of the locations used for filming. The Coen brothers grew up in St. Louis Park, a suburb of Minneapolis and have a very down to Earth way of working - typical of the locals.

The film starts out "based on a true story" - not surprisingly then to hear that there were folk who drove to Brainerd to try to find the money! The extras on the disc describe them later "admitting" they had no idea it wasn't true! On a side note to this, the Pioneer Press newspaper in Saint Paul has a treasure hunt every winter - following clues to find a medallion that results in a cash prize. Often the medallion was hidden under feet of snow (hidden weeks beforehand) - so you can see why the Coen's would have said it was plausible. They knew what would happen - 3+ feet of snow won't stop a Minnesotan on a mission for treasure!

BluRay transfer looks better than it did when it was released. Recommended, but still not for the faint hearted. I'd also recommend finding a copy of "Grumpy Old Men" which was also filmed in the same area - mostly in Saint Paul's East Side. Like Fargo, Grumpy Old Men was filmed at the wrong time of year - the snow had to be brought in for both films to depict a wintery backdrop, and both try to play on the Minnesotan dialects.
Read more
4 people found this helpful
Report abuse

Alan Argent
5.0 out of 5 stars Splendid!! How Far do you want to Go?
Reviewed in the United Kingdom on 17 January 2016
Verified Purchase
I picked up the season 2 series on British TV in 2015 and watched it avidly. Then I was reminded about the original 1997 film and bought the DVD from Amazon and re-watched it. Whether or not you'd call it a black comedy or a dark chiller thriller, this was a violent but brilliant crime drama in all respects, particularly the story lines and acting.
Unsurprisingly, the 1997 film won acting Oscars for pregnant Cop Frances McDormand and hapless embezzler William H Macey, and screenplay and best picture Oscars for Ethan and Joel Cohen, the originators. The film also won major Golden Globe and BAFTA awards that year too.
My advice is to watch the original film, which will hook you, then go for the TV Season 1 Series DVDs (loosely connected but set in about 2001) and wait for the Series 2 Set to appear (made in 2015 but set way back in about 1981 - you'll love the town butcher!
Read more
8 people found this helpful
Report abuse

C. J. Booth
5.0 out of 5 stars It's Coen, not Cohen.
Reviewed in the United Kingdom on 6 June 2016
Verified Purchase
Excellent Coen brothers comic-noir character filled crime drama. That's Coen, not Cohen. A simple thing like that yet so many don't get it right. Not surprising then that they also can't understand an intricately plotted and densely woven tale of greed and murder without it hitting them over the head with obviousness and cliche. If you like your Coen Bros movies then Fargo is an excellent addition, and this edition, newly remastered, is the best it has ever looked.
Read more
3 people found this helpful
Report abuse

Seatinthestalls
4.0 out of 5 stars The Best Laid Plans...
Reviewed in the United Kingdom on 30 January 2011
Verified Purchase
One of the Coen Borthers' better works, it reminds me of the recent and also Oscar-winning `No Country For Old Men'.

The story devolves around a hard-pressed man who needs money fast and dreams up a plan to have his wife kidnapped. His obdurate father-in-law is as rich as Croessus, but won't help him out in the least. The plan is to extract a ransom from him which he - the son-in-law will mostly keep. But the villains he chooses for the job are the most unreliable flunkies with a taste in brutal homicide. Things go wrong from the outset, and just get worse.

Frances McDormand plays the ever-optimistic heavily-pregnant police officer tasked to sort out the crimes and bring the villains to justice. Hers was an Oscar-winning role for a movie studded with stand-out performances playing off-beat drama in American backwoods Minnesota. It's such a refreshing change to get away from LA, San Francisco and New York. The work embodies some of the blackest humour that the Coens could contrive. The story is played out in winter, when much of life is snow-bound. Scenery is bleak to say the least.

Rarely nowadays, the movie has an `18' rating. There is sudden and explicit violence. Yet it's the humour and the comical dialogue that is most memorable. Collectible character-driven drama.

The DVD supplied had neither visual nor aural problems. Plenty of extras, if you like that sort of thing. I don't. It's in colour with both 16:9 and 1.85:1 aspect ratios listed. Dunno which applies.
Read more
4 people found this helpful
Report abuse

Michael Ferguson
5.0 out of 5 stars You will want to watch this again and again!
Reviewed in the United Kingdom on 22 October 2020
Verified Purchase
Absolutely must see movie.
Based on true events,the story is told in such a way that you become completely engrossed.
The atmosphere is one of a snowy,sleepy towns police force investigating murderous events and their approach to the investigations.
Absolutely brilliant acting by all characters,you actuaĺly care in a strange way even for the bad guys because they are so tragic.
You see this film once...and then want to watch it again.
5 stars!
Read more
Report abuse
See all reviews
Get FREE delivery with Amazon Prime
Prime members enjoy FREE Delivery and exclusive access to movies, TV shows, music, Kindle e-books, Twitch Prime, and more.
> Get Started
Back to top
Get to Know Us
Make Money with Us
Let Us Help You
And don't forget:
© 1996-2020, Amazon.com, Inc. or its affiliates