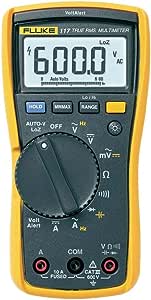 With its integrated non-contact voltage detection and the AutoV/LoZ function preventing false readings caused by ghost voltage, the Fluke 117 Electrician's Multimeter is the ideal multimeter for electricians. In fact, users around the world have said their 117 is an investment in accuracy. The Fluke 117 provides Min/Max/Average readings, measuring frequency and capacitance. With its easy-to-use design, the Fluke 117 will save you time, allowing you to move from job to job with ease. Surge protection 6 kV peak per IEC 61010–1 600 VCAT III, Pollution Degree 2

Fluke Digital Multimeters (DMM’s) are on more tool belts, finding more problems, than any other comparable test tools. Each design is tested to the extreme: drop, shock, humidity, you name it. Every Fluke Digital Multimeter gives you what you need: accurate measurements; consistent, reliable performance; attention to safety.

The Fluke 117 is the ideal meter for demanding settings like commercial buildings, hospitals and schools. The 117 includes integrated non-contact voltage detection to help get the job done faster.

4.9 out of 5 stars
4.9 out of 5
1,889 global ratings
How are ratings calculated?
To calculate the overall star rating and percentage breakdown by star, we don’t use a simple average. Instead, our system considers things like how recent a review is and if the reviewer bought the item on Amazon. It also analyses reviews to verify trustworthiness.

Kai Howells
5.0 out of 5 stars It's a Fluke
Reviewed in Australia on 8 October 2020
Style Name: Multimeter StandardVerified Purchase
Are there cheaper multimeters out there? Yes. Are there more rugged units? Yes. Are there units with more features? Yes. But none of them are a Fluke.
This is a very good meter for electrical, as well as electronics work. It doesn't have mA or µA, but the regular A range will measure down to 1 mA (as 0.001 A), and combine this with the fact that you're usually measuring voltage, or continuity anyway, so that's good enough for me.
The probes that come with it, while they're genuine Fluke, aren't the best I've used - the insulation on the wiring is a stiffer plastic, not a nice bendy silicone. Which is odd, as on the Fluke website it says you get silicone leads. The meter itself is great. It's expensive, but I can absolutely rely on it being more accurate than I'll ever need it to be. I can also rely on it being safe to use, if it says it's rated at CAT III 600V, and I know that Fluke will have made sure it's not going to blow up in my hand, even if I'm stupid enough to hit it with over 4,000V.
The other meter I considered was the Fluke 17B+, which was a very strong contender, especially as it's half the price, but it doesn't have True RMS (which, I'm told, is one of those things that when you need it, you really need it) and it doesn't have an analogue bar graph.

William Jasinski
5.0 out of 5 stars Reliability
Reviewed in Australia on 15 February 2020
Style Name: Multimeter StandardVerified Purchase
In using the product in the field I have not yet had the opportunity in faultfinding to use all the features on the meter but so far so good the meter seems to be strong reliable and a wonderful addition to my tool box.
Read more
Helpful
Comment Report abuse
See all reviews

Oliver
3.0 out of 5 stars Great overall but with a really sub-standard display
Reviewed in the United Kingdom on 13 October 2019
Style Name: Multimeter StandardVerified Purchase
Excellent all around multimeter, if you don't mind the absence of a mA range.
Fast, excellent bar-graph, good construction, this is a quality meter. BUT.

That makes me wonder why on earth Fluke went on cutting silly corners with a crappy LCD display. The display is contrasted and crisp if viewed from about 30° down. this is where the peak contrast occurs. So that works fine if the meter is laying flat on a workbench.

On the other hand, if you look at the display straight, like you would if the meter is on it's stand or attached to a magnetic hanger at your eyes level, the contrast is so low that the numbers are borderline unreadable. From any angle upwards, the display is basically blank and useless. It's an issue that my previous $15 multimeter did not suffer from.

Such a basic LCD display is so cheap that I almost resent Fluke for going this route.
I am seriously considering returning the unit. At this price tag, it's just unacceptable. Searching about this issue online confirms this is a pretty well known "feature" of the 11x series and going on for YEARS. One would imagine they would have fixed this by now, but they haven't.

James
5.0 out of 5 stars My go to meter!
Reviewed in the United Kingdom on 13 September 2020
Style Name: Multimeter StandardVerified Purchase
I worked in the water industry for 2 years as a spark. With my head buried in all kinds of motor starter panels and joint boxes. This was and still is my go to meter! Does everthing a professional spark needs! I bought a seperate pouch for this as the fluke version is a hilariously stupid price.

The meter display is a bit annoying like a previous review mentioned as you do seem to need to look at it head on otherwise you can't see it. Easy to select what you need. Shuts off on its own if you leave it on. Can take some abuse. All in all an excellent meter! If you need a meter you can't go wrong.
Read more
Report abuse

Calum Finn
5.0 out of 5 stars Outstanding meter - guaranteed quality from Fluke
Reviewed in the United Kingdom on 6 January 2017
Style Name: Multimeter StandardVerified Purchase
Use the next model up from this one at work but for for my home electronics projects and simple installs around the house I don't need to measure temperature, this meter is by far head and shoulders above the rest - Don't bother buying a terrible Chinese one, thinking you are saving a few quid because they almost always break after being dropped. You are guaranteed a quality product from Fluke which is why they are most commonly found in industry service.
Read more
7 people found this helpful
Report abuse

Nephin
5.0 out of 5 stars Rolls Royce of multimeters
Reviewed in the United Kingdom on 20 May 2018
Style Name: Multimeter StandardVerified Purchase
The best: if you can afford it, buy it, because it doesn't economise on safety, both in what you can see, and what you can't.

Leaderman provide the best cases.
Read more
2 people found this helpful
Report abuse
See all reviews
Pages with related products. See and discover other items: Best Rated in Automotive Tools & Equipment, Top rated in Multi Testers
Get FREE delivery with Amazon Prime
Prime members enjoy FREE Delivery and exclusive access to movies, TV shows, music, Kindle e-books, Twitch Prime, and more.
> Get Started
Back to top
Get to Know Us
Make Money with Us
Let Us Help You
And don't forget:
© 1996-2020, Amazon.com, Inc. or its affiliates