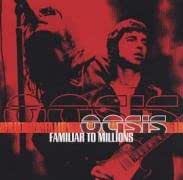 4.5 out of 5 stars
4.5 out of 5
132 global ratings
How are ratings calculated?
To calculate the overall star rating and percentage breakdown by star, we don’t use a simple average. Instead, our system considers things like how recent a review is and if the reviewer bought the item on Amazon. It also analyses reviews to verify trustworthiness.

Ade
1.0 out of 5 stars COPIES and very POOR at that
Reviewed in the United Kingdom on 29 July 2020
Verified Purchase
YET ANOTHER COPY. DEFINATELY NOT AS DESCRIBED. Poor condition and doesn't play properly. I bought Familiar to Millions, Heathen Chemistry and Dig Out Your Soul together via Amazon thru Music Magpie. All arrived at the same time, in same poor condition with cases cracked and broken. I could tell they were ALL copies as soon as I opened the packaging. If I can tell, why could this NOT be seen at any point they were in any of the distribution centres?? Waste of money as NONE of them play properly.
Very disappointed and unfortunately this is NOT the first time this has happened. It is the last time thou as I will NOT order from Music Magpie via Amazon again.

Mark
4.0 out of 5 stars cd is not new ,mine is scratched , worn on the shiny side ,tatty cover ,gutted ,waste of money 👎
Reviewed in the United Kingdom on 7 December 2019
Verified Purchase
Not new. ,scratched ,won’t play some songs, I should of complained , , these are not new cd like advertised, No matter what they say. , Waste of money. Not new like they say ,mine was tatty cover,scratched, won’t play most songs and disc looks well worn or played a lot, these are not new. Waste of money
Read more
2 people found this helpful
Report abuse

S.
5.0 out of 5 stars A Band At Their Live Best
Reviewed in the United Kingdom on 13 November 2013
Verified Purchase
Three years after Be Here Now dropped them in a mudslide, Oasis released what is still an underrated album in Standing On The Shoulder of Giants, and then this, one of the finest live albums you're likely to hear. Liam's live vocals are probably at their peak here in terms of his Oasis career; only recently with Beady Eye has he been able to rediscover some of his old magic in regards to live singing. Nonetheless, he was still able to explode into life on this two-disc LP, with the Wembley crowd in the palms of his hands. Other than their own material, which they absolutely nail, one particular highlight is Noel's cover of Neil Young's "Hey Hey, My My (Into the Black)". As he did with David Bowie's "Heroes", Noel gives the song a touch of Oasis and it works a treat.

This album is a must for any Oasis fan obviously, but also for lovers of Britpop and 90's rock. Regardless of what cynics say about Oasis post-"What's The Story...", they were always a great band and on the stage they never let anyone down. This album is proof of that.

Mr. Ian P Lock
1.0 out of 5 stars Arrive in very poor condition.
Reviewed in the United Kingdom on 21 July 2020
Verified Purchase
I ordered this CD from Musicmagpie. It arrived in shocking condition. It is completely scratched and unplayable. I certainly won't be ordering from them again.
Read more