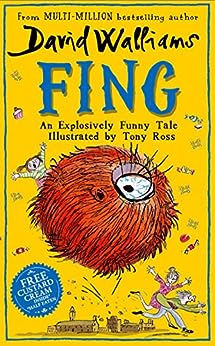 Noise: The new book from the authors of ‘Thinking, Fast and Slow’ releases on May 19.
If the Amazon.com.au price decreases between your order time and the end of the day of the release date, you'll receive the lowest price. Pre-order now.

"Another triumph for David Walliams. His books are a breath of wonderful fresh air" – The Sun

David Walliams – comedian, actor and author – continues to take the children's literary world by storm. His tenth novel, BAD DAD, was an immediate number one, following the triumph of THE MIDNIGHT GANG, the biggest-selling children's book of 2016. WORLD'S WORST CHILDREN 2, which published in early 2017, spent four weeks at industry number one and eight weeks at the top of the children's chart. They have achieved unprecedented critical acclaim – and RATBURGER, DEMON DENTIST and AWFUL AUNTIE have all won the National Book Awards Children's Book of the Year. David's books have now exceeded 100 non-consecutive weeks in the children's number-one spot, and have been translated into 53 languages, selling more than 32 million copies worldwide.

4.8 out of 5 stars
4.8 out of 5
3,796 global ratings
How are ratings calculated?
To calculate the overall star rating and percentage breakdown by star, we don’t use a simple average. Instead, our system considers things like how recent a review is and if the reviewer bought the item on Amazon. It also analyses reviews to verify trustworthiness.

Kindle Customer
3.0 out of 5 stars it was pretty good
Reviewed in Australia on 13 September 2019
Verified Purchase
the book wasnt the best but it wasnt the worst...
Cons:
it wasnt really based on fing
it was more based on the dad and the daughter
Pros:
it was funny
it was entertaining

Aggie
TOP 50 REVIEWER
5.0 out of 5 stars Another great story from Mr Walliams.
Reviewed in Australia on 23 March 2019
Verified Purchase
My daughter is enjoying her book as she does all the David Walliams books. We all love the humour and witty writing that is just as appealing to adults.
Read more
One person found this helpful
Helpful
Report abuse

dt364
5.0 out of 5 stars great
Reviewed in Australia on 26 May 2019
Verified Purchase
this is a great book! I recomend this for 11 yr old boys.
You should get this book it is truely amazing!
God dam it in need to do 20 words
Read more
One person found this helpful
Helpful
Report abuse

Stefan Luke
5.0 out of 5 stars Fing
Reviewed in Australia on 24 February 2019
Verified Purchase
This book in my opinion is the best children's book my son has ever read. The fun and mischievious characters really do lighten the mood of the reader!

One of the best books out there! (David Walliams is a great author)
Read more
One person found this helpful
Helpful
Report abuse

Lilah Perry
5.0 out of 5 stars Amazing book
Reviewed in Australia on 18 May 2020
Verified Purchase
I think it was very interesting book and I really enjoyed it! I have to do twenty words so her are some random ones: cat dog harry potter
Read more
One person found this helpful
Helpful
Report abuse

Hayley
5.0 out of 5 stars Great book
Reviewed in Australia on 22 April 2019
Verified Purchase
I love david walliams this is a great book for kids it made me feel mixed feelings but a great book highly recommend for kids of all ages.
Read more
One person found this helpful
Helpful
Report abuse

K. J. Noyes
2.0 out of 5 stars Elongated 'World's Worst Child' tale, not a strong Walliams story
Reviewed in the United Kingdom on 8 March 2019
Verified Purchase
From the first, I had the feeling this was one of the WWC series, expanded. This was the first time my son has bought a Walliams' on day of publication, as he's such a fan of every other by the author (we've only missed out Awful Auntie). It's taken around 10 nights for me to read it to him, and he's enjoyed it.

So this review is not from his perspective - an 8 year old will love this: bum/poo jokes, lots of noises and silly creatures, things being destroyed, lists. It's also half the length of most of Walliams' recent novels, but still with regular Tony Ross sketches, so does speed along. No, it's great for the target market.

But as an experienced reader and librarian, it's pretty weak I'm afraid. This is the author's first novel with no hero/heroine. As Myrtle is a World's Worst Child in all but book title, she's actually also a minor character for most of the book. Spoiled by her librarian parents (oh what a terrible example they set for my profession!), she's a stereotype of an indulged brat with no personality anyway - nobody will be dressing up as her next World Book Day.

And Mr and Mrs Meek themselves are spineless simpering cliches, calling each other 'Mother' and 'Father'. There's nothing to them and they don't grow or do anything of note throughout the entire book.

While my son found this entertaining, and I did enjoy some moments (list of unusual creatures in the MONSTERPEDIA being one), it just didn't feel as though it had been created with much love or care as some of the author's others clearly were. Even Fing himself has no character - he's an eating/pooing being, no emotion besides a lot of 'grrrr'ing. So I didn't care for the girl, her parents, the pet - there's no 'enemy' or battle... it really is just a reject from World's Worst Children or one made longer.

We spotted our beloved Raj twice (once as a graphic on a bus, and once Walliams shoehorns him in, even saying he's done it to place the much-esteemed newsagent in the story). Always a highlight, but certainly not enough to help raise this up from 'meh' rating to the bestselling status it will instantly earn without the merit of Walliams' previous heartfelt and genuinely funny inventions.

Danny
3.0 out of 5 stars Literary equivalent of a Big Mac
Reviewed in the United Kingdom on 17 March 2019
Verified Purchase
David Walliams is getting a bit lazy. This is an extension of a worlds worst children story.

The good - My seven year old read the book herself in a couple of sittings. She enjoyed it and it was easier for her to read alone than some of the longer DW books. Good for reluctant readers. The basic storyline was quite amusing - it will resonate with parents of children who always seem to ask for more stuff (ie mine!).

The bad - This felt like cheap, disposable literature. The children’s story equivalent of a Big Mac. Great for a quick hit, but doesn’t last long and leaves you with a lingering feeling of dissatisfaction. Absolutely no depth and the characters were unbelievably stereotyped. Even more so than DW’s other books. The book was padded out with illustrations and lists. A few lists are amusing, but DW went too far with the number of lists in Fing.

I would recommend buying this for a 7/8/9 year old who is struggling to enjoy reading. However, if you are looking for a better example of DW’s work, opt for something with more substance like the Midnight Gang or Bad Dad.
Read more
24 people found this helpful
Report abuse

michelle oldroyd
1.0 out of 5 stars Only sells because it is David Walliams!!!!!
Reviewed in the United Kingdom on 5 March 2019
Verified Purchase
This could be an extract from worlds worst children! Think David Williams is milking the cash cow with this piece of trite
Read more
18 people found this helpful
Report abuse

Becks
4.0 out of 5 stars Nice looking book
Reviewed in the United Kingdom on 4 March 2019
Verified Purchase
Super fast delivery. My son was excited to receive the package only to find the front cover had a big rip down it. Shame but he's looking forward to reading the book.
Read more
11 people found this helpful
Report abuse
See all reviews
Back to top
Get to Know Us
Make Money with Us
Let Us Help You
And don't forget:
© 1996-2021, Amazon.com, Inc. or its affiliates