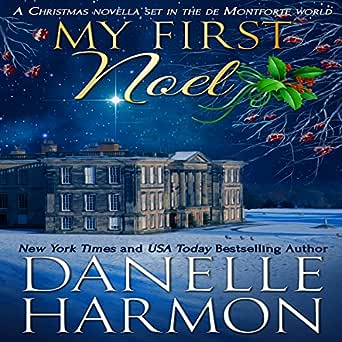 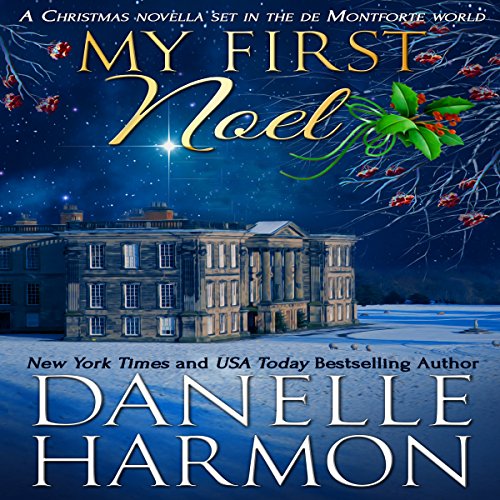 4.2 out of 5 stars
4.2 out of 5
50 global ratings
How are ratings calculated?
To calculate the overall star rating and percentage breakdown by star, we don’t use a simple average. Instead, our system considers things like how recent a review is and if the reviewer bought the item on Amazon. It also analyses reviews to verify trustworthiness.

DragonRose UK
4.0 out of 5 stars Feel Good Festive Read
Reviewed in the United Kingdom on 30 November 2016
Verified Purchase
My First Noel: A Christmas Novella Set in The De Montforte World by Danelle Harmon is a lovely feel good festive read.

Poor Lady Katharine Farnsley has been jilted yet again. This is the third time that she set her sights on marriage, and her second broken betrothal. In hind sight she realises that it's her cold demeanour that puts men off her, her unforgiving ways make her a cold woman. She is a lonely woman. It's Christmas eve and she has just found out that she is a single woman once again. The man in question couldn't even tell her to her face, he sent a letter.

Her brother Perry should have brought her some comfort after the news but he just used it as an excuse to get further into 'his cups' as he has been doing ever since returning home from France where he was exiled by Lucien De Montforte. There is no love lost between the De Montforte's and Perry and Katharine.

Lucien finds himself being held up by a highway man. A highway man with not a lot of experience. In fact he only robs coaches because he has been turned away from his family who refuse to help him take his rightful place as a Lord. The robbery of course is not a success, I mean come on, Lucien De Montforte is not a man you tangle with. Instead our highway man ends up thrown from his horse which then lands on top of him. He is badly hurt, and the only Christmas concession Lucien makes is to tell the man he will give him time to get away. He's going to fetch the magistrate, and if the man is gone by the time they get back, then he won't search for him.

Our highway man finds his way to Katharine's house, practically dragging himself through the snow. He manages to knock on her door, and when Katharine answers she soon tells him he's disgusting being in a drunken state and closes the door on him. She then thinks more about it and goes back to the door to let him in. After all it's Christmas and she should be kind.

During his one night in the house a change comes over Katharine after she has a dream, a dream that makes her realise that she needs to change her ways, be a kinder person. When she does, that is when she will find happiness. She wants to find that happiness with her mystery highway man. He is certainly attracted to her, love at first sight despite his injuries.

I enjoyed this very quick read, but must admit that I feel as if there could be much more to it. Perhaps a follow on book? Yes we have our happy ever after, but we are still left wondering what happens with our highway man, will he take his rightful place? What of Perry, will he overcome his nightmares and drinking habits? Both things that I really want to know the answers for. Other than those unanswered questions, this was a really lovely feel good story that reminds us of the real meaning of Christmas.

C. Potts
4.0 out of 5 stars Novella Needs Epilogue
Reviewed in the United States on 3 June 2020
Verified Purchase
Lady Katharine Farnsley, former fiancé of Charles e Montforte and sister to Perry (Lady Nerissa’s former fiancé) received an engagement withdrawal on Christmas Eve. Kat’s cold exterior masking a world of hurt, she despairs of ever finding true love. A mysterious stranger, Noel O’Flaherty, comes to her, hurt and desperate on that snowy Christmas Eve. She never dreams that opening the door to him will change her life forever and show her the true meaning of Christmas. – Kat is sad and bitter from her broken engagements. She feels sorry for herself, and brother Perry’s damaged soul cannot help. Noel is wise, kind, and down on his luck. He sees the sadness in Kat and helps her see what really matters. This is a good novella but feels like half the story. An epilogue would have helped. I read the first book in this series and bought the remainder. I hope the author will write a novella about the de Montforte four brothers and sister, their spouses, children, and status.
Read more
2 people found this helpful
Report abuse

Danker
4.0 out of 5 stars Noel transforms the shrew
Reviewed in the United States on 26 November 2016
Verified Purchase
My First Noel has all the elements of a good HR Christmas story: love at first sight; three tortured protagonists (with love rescuing two of them); a handsome, cutely-named H who slips into thieving after misfortune brings him low: a shrewish h who is transformed by a vision that the H is the embodiment of her Saviour (and then her saviour); an all-encompassing Christmas theme regarding generosity and kindness, as well as the potential for forgiveness.
Moreover, Harmon is a skilled creator of many successful HR titles and the writing in this story demonstrates why this is so.
On that basis I should be giving My First Noel a five starred rating - but I can't.
SPOILER
The H is driven to hold up a coach because he is faint with hunger and, hours later, he sits in a kitchen, unfed, and leaves a hot cup of tea without drinking it? A horse falls on him, he is bleeding and feels he may have a broken rib, is in ghastly pain, but minutes later he holds his arms wide and the h rushes in to them to be hugged against him? He is wounded, bleeding, and his horse close to exhaustion, but only a few hours later, with no medical attention, they both swing on to the same horse - taking no provisions or spare clothing - to ride to London? In freezing weather?
I was enjoying the story until I was jarred by these inconsistencies. Sad, because, with minor adjustments, this would be a 5 star novella. As it is, I think it deserves three and a half stars, rounded up.
Read more
7 people found this helpful
Report abuse

P. Beckwith
5.0 out of 5 stars Sweet Christmas Novella
Reviewed in the United States on 4 December 2016
Verified Purchase
Flat out, the best thing about this novella was that Lucien, the Duke of Blackheath, was involved. If you have read any of the de Montforte novels, you know Lucien. It would be horribly disappointing if he were not to make an appearance, and I don't think I am the only reader who considers him the series favorite.

Do not fear if you are not familiar with the series or the infamous Duke of Blackheath, this can be read as a standalone. There is some very great plotting and writing that references some of his previously revealed characteristics, such as being a bit of a matchmaker underneath his devious and formidable personality that might not be as apparent to new readers, but he is not the focus of this story.

This novella does make use of Christian religious belief as part of the storyline. I don't want to have spoilers, but Christmas is more than a holiday season in this book. This was something that I was not expecting and don't recall from the previous books. There are also no intimate scenes in this novella.

I was honestly disappointed that this is so short, even considering it is a novella. The hero, in particular, had an amazing backstory and at the end of the story he was just on his way to resolve his situation. I believe this warranted a longer story. It was a bit as if the story ended at the end of a chapter to a novel, with the next chapter being perfectly set up but not included. I enjoy novellas and understand that they are not the same as novels, yet I still felt that this was too condensed.

Danielle Harmon's writing is always so satisfying, and her stories are so engaging, and this was no exception. That is why even though I was slightly disappointed at the particularly short length and the almost abrupt and unsatisfying ending, I still greatly enjoyed this novella.
Read more
3 people found this helpful
Report abuse
See all reviews
Get FREE delivery with Amazon Prime
Prime members enjoy FREE Delivery and exclusive access to movies, TV shows, music, Kindle e-books, Twitch Prime, and more.
> Get Started
Back to top
Get to Know Us
Make Money with Us
Let Us Help You
And don't forget:
© 1996-2020, Amazon.com, Inc. or its affiliates