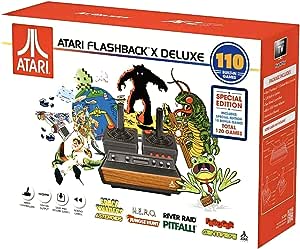 Brand: At Games
4.0 out of 5 stars 98 ratings
Secure transaction
Returns Policy
Amazon-managed Delivery
Your transaction is secure
We work hard to protect your security and privacy. Our payment security system encrypts your information during transmission. We don’t share your credit card details with third-party sellers, and we don’t sell your information to others. Learn more
Amazon-managed Delivery
Amazon manages delivery by using preferred couriers/agents. Order delivery tracking to your doorstep is available

The Atari Flashback X Deluxe features 110 built-in video games that include 10 bonus games. These games include such hits as Adventure, Asteroids, Centipede, Chopper Command, Frogger, Missile Command, Pitfall!, Space Invaders, Yars’ Revenge, and so much more! Other impressive features of the Atari Flashback X include high definition 720p video output with scanline filtering, an intuitive menu system, save and resume game functionality, and the ability to rewind a game in progress to recover from a play misstep. Two authentic-looking wired joysticks are included for one or two player action on this incredible new mini console design that looks just like the original Atari 2600 Video Computer System! HDMI Cable is not included.

4.0 out of 5 stars
4 out of 5
98 global ratings
How are ratings calculated?
To calculate the overall star rating and percentage breakdown by star, we don’t use a simple average. Instead, our system considers things like how recent a review is and if the reviewer bought the item on Amazon. It also analyses reviews to verify trustworthiness.

Chad Davis
5.0 out of 5 stars ATGames Finally Got It Right!
Reviewed in the United States on 21 February 2020
Verified Purchase
Most folks who enjoy retro gaming are well aware that ATGames doesn't have the best reputation for the products that they produce. However, after nine previous attempts, they finally got it right. This mini console is visually more faithful to the original than the previous iterations. Gone are the yellow and red buttons on the console. They have been replaced with silver slide switches that resemble the original switches on the old VCS. The only gripe that I can bring up is that there is a blank spot on the left side of the console where the BW/Color switch would be. It throws of the aesthetic of the console a bit, but it is better than the previous buttons they used. This unit is truly a mini console being about the size of a 3.5" hard drive. The joysticks have the feel in the hand of the originals. However, the stick in use has a totally different feel. It is responsive and works fine, but be aware, if you grew up playing the original VCS, it will feel strange. The included games are the usual faire that we have seen on previous consoles. There is no SD slot to easily add your own games. However, you still can add your own games with a thumb drive and an OTG USB cable. Instructions on how to do this are on ATGames website. These instructions are extremely easy to follow and are quite good. You first have to update the firmware on the console before it will recognize the thumb drive. Be aware that you will have to remove four screws on the bottom of the console to access a switch on the motherboard to update the firmware. The update requires downloading drivers and an android toolkit. This looks to be only available to PC users as there are no download links for MAC users. Once the firmware is updated, you shouldn't have to open the console again. The firmware update instructions indicate that future updates can be performed through the thumb drive. While it is not perfect, I feel that this is the best flashback version of the VCS to date.
Read more
18 people found this helpful
Report abuse

Amanda
1.0 out of 5 stars Does not come with games that’s shown.
Reviewed in the United States on 26 March 2020
Verified Purchase
I specifically ordered this not only to bring back what I had when I was a kid to share with my own but was super excited to have trigger and pitfall. Spent this amount of money for those two games and it does not come with it although it displays it on the front cover as well as the game list in the back of the box. I’m beyond disappointed to say the least.
Read more
13 people found this helpful
Report abuse

John in Jax
1.0 out of 5 stars Not really an Atari
Reviewed in the United States on 18 July 2020
Verified Purchase
If you have never played an Atari 2600, this game will be fine for you. If you are an old schooler like me, the games look Atari like but the games aren't quite the same. The two examples I have is for Frogger and Space Invaders. In Frogger, the turtles do not follow the pattern that I remember. In the original game there was always one pair that stayed above water. On this one, all the turtles go under. I was looking forward to Space Invaders so that my wife and I could play together. I remember an option that allowed two players to play at the same time, not one after the other. This game does not have it.

I would have sent it back but by the time I paid shipping and the sellers 50% restocking fee (JMEGoods), it wasn't worth it.

M. Dragoon
4.0 out of 5 stars Fire button doesn't work 6 out of 10 times, but still great
Reviewed in the United States on 30 November 2020
Verified Purchase
This console is a huge improvement over my old Flashback 7 in virtually every conceivable way. It's much smaller, matching the size of the Nintendo Classics consoles, looks more like the original 2700 than other Flashbacks, has good audio and video quality through HDMI, an optional scanline feature, a save feature, a rewind button, and a great selection of games that can be played solo or with friends. The console's menu gives detailed instructions for how to play each game and lets you sort or favorite them games. And apparently, contrary to popular belief, you can add more games to this console like the recent previous iterations allowed through the use of a thumb drive and some software from AtGames' site, though I'm not 100% sure how to do that.

However, the fire buttons on both controllers tend to be non-responsive. Approximately 6 out of 10 times, the fire button results in nothing happening, even when pressed down quite hard. For a game where you might spam the button, like Space Invaders, this isn't much trouble. But for games that require precision, like Pitfall, failure to perform an action when the fire button is pressed results in instant loss of tries or game over. The rewind feature alleviates this somewhat, but I shouldn't have to use the rewind button to correct a hardware failure, making playing these games frustrating.

Also, minor thing, there is a glitch in Space Invaders on this console that will pop up sometimes, giving the player an instant score of 999,999 with the destruction of one enemy. Considering this is several times the world record high score, it's a little silly and annoying when playing with friends.

I really hope AtGames releases a Flashback XI that's virtually identical but with reliable fire buttons. And better scoring on Space Invaders. Then it would essentially be perfect, even without adding any more games.

John Jay
4.0 out of 5 stars Beware of fond memories
Reviewed in the United States on 13 November 2020
Verified Purchase
It mostly does what it says, and is built well. The controllers do seem to have a slight lag on some games, but not all. And there are no paddles included, making the paddle games hard to play. The left controller has some additional switches on the side, so you don't have to use the switches on the console. Worked right out of the box with no issues.

The downside is it's easy to forget just how crude the graphics were, and that's amplified using a modern big flat screen tv. Much like re-watching some old tv show or movie that you loved as a kid, and realizing it's not as good as you remember it (and your kids think it's just lame....).
Read more
2 people found this helpful
Report abuse
See all reviews
Get FREE delivery with Amazon Prime
Prime members enjoy FREE Delivery and exclusive access to movies, TV shows, music, Kindle e-books, Twitch Prime, and more.
> Get Started
Back to top
Get to Know Us
Make Money with Us
Let Us Help You
And don't forget:
© 1996-2020, Amazon.com, Inc. or its affiliates