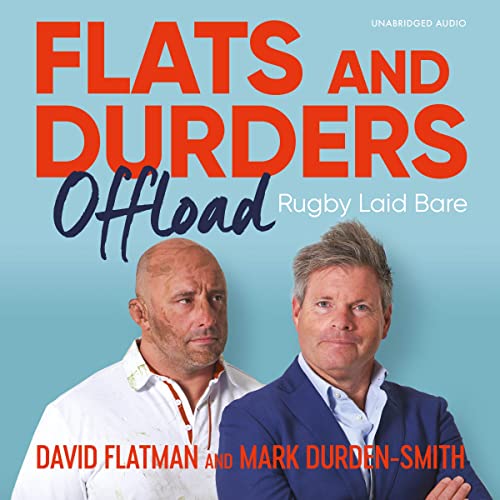 Shortlisted for the Sports Entertainment Book of the Year

Once described as rugby’s answer to Ant & Dec, David Flatman and Mark Durden-Smith are the oddest of odd couples. Now this hugely popular rugby broadcasting double act have turned to dissecting and celebrating rugby union in audiobook form. And, as you’d expect, it’s a brilliant combination of in-depth knowledge and hilarious stories.

Familiar to millions of fans through their television work, they provide fascinating and entertaining insight into the sport they love. They reveal the hardest players, the greatest characters and the intimate secrets of the front row. They address key issues facing the sport, such as injury, retirement and the future of the game. Nothing is off limits and no quarter is given—to anyone.

With insightful analysis, unforgettable stories and the occasional food reference, Flats and Durders Offload is an unmissable listen for all rugby fans.

Read more
©2021 David Flatman and Mark Durden-Smith (P)2021 Simon & Schuster, UK
Previous page
Next page
Learn more about membership
By completing your purchase, you agree to Audible’s Conditions Of Use and Privacy Notice.
Sold and delivered by Audible, an Amazon company

4.4 out of 5 stars
4.4 out of 5
73 global ratings
How are ratings calculated?
To calculate the overall star rating and percentage breakdown by star, we don’t use a simple average. Instead, our system considers things like how recent a review is and if the reviewer bought the item on Amazon. It also analyses reviews to verify trustworthiness.

Aitch
5.0 out of 5 stars Flatman and Flash Man excel!
Reviewed in the United Kingdom on 16 November 2021
Verified Purchase
David Flatman is the Rugby equivalent of 'Bumble 'Lloyd in cricket. Hugely funny, deadpan, and a perfect foil to the priveleged, perfectly coiffured peacock that is Mark Durden-Smith.
Smith himself tells some very funny stories, and is more than content to play second fiddle to the deadpan brilliance of Flats.
Anyone who has seen them on the Gallagher Premiership highlights will almost be able to hear the authors "discussing" the varied topics in the book.
Lightly partial biographical, and partly a commentary on the game, including what they would change, this is a very entertaining, and at times laugh out loud tome.
Recommended for all Rugby Union fans, or sports fans just after a good laugh.
Highly recommended.
Read more
Report abuse

Jmmscot
3.0 out of 5 stars Expected better
Reviewed in the United Kingdom on 13 February 2022
Verified Purchase
I like them but this did not meet my expectations I will read it again in a few months maybe my mood was wrong
Read more
Report abuse

Mrs K A Hudson
5.0 out of 5 stars Very entertaining!
Reviewed in the United Kingdom on 2 January 2022
Verified Purchase
If you enjoy rugby, you will love the book. Easy read with great anecdotes and whit.
Read more
Report abuse
See all reviews