Skip to main content
The Flavor Equation and over 1.5 million other books are available for Amazon Kindle . Learn more
Share <Embed> 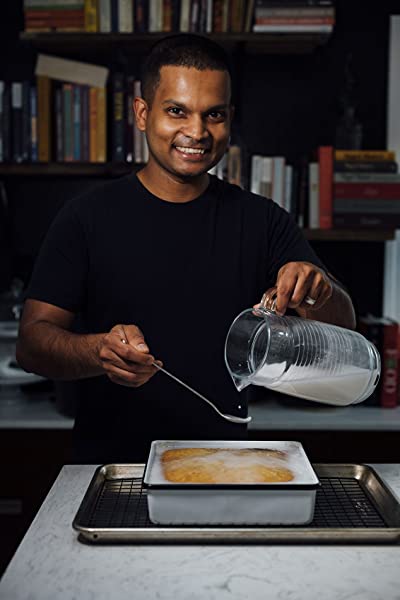 Page 1 of 1 Start overPage 1 of 1
Previous page
Next page
Start reading The Flavor Equation on your Kindle in under a minute.

"The Flavor Equation is destined to be classic: original, thought-provoking, and illuminating. It is a book that will change the way you think about food and cooking, and will help to make all your other cookbooks make sense." -Nigella Lawson, author of At My Table

"The Flavor Equation is written by someone who understands flavor first. This is not a book for geeks who want to deep dive into amino acids, gels, and osmosis. This is a book about how to turn out food that optimizes flavor. Nik Sharma and others are teaching us that good food is not about technique per se: years standing in front of the stove, advanced knife skills, and mastering pastry technique. It's about crafting flavor through an understanding of what flavor actually is." -Christopher Kimball, founder, Milk Street(from the foreword)

"As someone with his own obsession with flavor, I find Nik Sharma's take on it totally fascinating. It is deep and illuminating, fresh and highly informative. That, combined with his always-sumptuous food and staggering photographs, makes The Flavor Equation a most brilliant achievement." -Yotam Ottolenghi, chef and author of Jerusalem

"If you're interested in flavor-and every cook is, that's what we constantly think about-this book is for you. I haven't learned so much from a single book in a very long time. I'm now cooking my way through it." -Diana Henry, James Beard award-winning author of A Bird in the Hand

"In The Flavor Equation, Nik marries the art and science of cuisine. It offers a holistic approach to cooking at home; one that celebrates both chemistry and emotion, in both the creation and enjoyment of our meals." -Stella Parks, pastry chef and author of BraveTart: Iconic American Desserts

"Nik Sharma answers the hows and whys of taste from a scientific perspective as well as one from a well-seasoned cook. The multicultural flavors that are sure to entice anyone's taste buds to spring into action. Anyone wanting to take a deep dive into how to make food taste better will revel in Nik's thoroughly researched-and gorgeously photographed-treatise on the topic." -David Lebovitz, author, My Paris Kitchen and Drinking French

"Nik Sharma has created an irresistible book that makes you want to immediately jump in the kitchen. There is not a single recipe that I would not want to cook, I am dying to make them all! This book helps you understand the deep complexities that surround our food, and how much it can mean to us." -Pati Jinich, chef, cookbook author and host of PBS Pati's Mexican Table

"Some consider cooking to be a series of chemical and thermodynamic reactions, others see it as an embodiment of heart, emotion, culture, and family. In The Flavor Equation, Nik Sharma shows us how these elements-the brain and the heart-are not at odds with each other, but that they are in fact intimately intertwined. Understanding their interaction is the key to unlocking flavor in your own cooking, as Nik demonstrates in this beautiful and intelligent book." -J. Kenji López-Alt, author The Food Lab and Chief Consultant for Serious Eats.com

"Whatever your skill level in the kitchen, with its more than 100 recipes, illustrated diagrams, and Sharma's own evocative photography, The Flavor Equation is an engrossing guide to elevating simple dishes into holistic experiences." -Eater, Best New Cookbooks Fall 2020

The Flavor Equation is destined to be classic: original, thought-provoking, and illuminating. It is a book that will change the way you think about food and cooking, and will help to make all your other cookbooks make sense. -Nigella Lawson, author of At My Table

Nik Sharma is the writer, photographer, and recipe developer behind A Brown Table, one of the most critically acclaimed food blogs and photojournals, and the author of Season, an NYT best cookbook in 2018. His meteoric rise in the food scene has brought him two IACP Digital Media Awards and a Saveur Best Food Blog Award finalist spot. Nik and his work have been the subject of a PBS documentary and an NPR feature on minorities in food, and he has written for or collaborated with Food52, America's Test Kitchen, Food & Wine, Williams Sonoma, Cosmopolitan, Design*Sponge, West Elm, KitchenAid, Le Creuset, and many others. Nik’s visual food column for the San Francisco Chronicle, A Brown Kitchen, debuted on the front page of the Food & Home section in July 2016 and runs weekly in both the print and digital editions. He also writes a column for Serious Eats on the science of flavour, which reaches millions of readers.

4.7 out of 5 stars
4.7 out of 5
515 global ratings
How are ratings calculated?
To calculate the overall star rating and percentage breakdown by star, we don’t use a simple average. Instead, our system considers things like how recent a review is and if the reviewer bought the item on Amazon. It also analyses reviews to verify trustworthiness.

Thomas Holt
2.0 out of 5 stars Not "science" as we know it.
Reviewed in Australia on 1 March 2021
There a lots of very good science books out there, and some which are so profound that they change the way people think. Unfortunately, this book belongs to neither category. The author develops a very simple model of that intangible - flavour - where some of the variables are based on individual experience and the individual's subjective assessment - if any - of those experiences. I waded through about a quarter of this book before giving up on it ever being remotely useful to me as a cook of 40 years and, unfortunately, ever being remotely interesting to me as a scientist for a slightly longer period. I found Samin Nosrat's "Salt, Fat, Acid, Heat..." a much more rewarding read as a cook and a scientist - I learned something new and useful within 15 minutes of picking it up!
Read more
Helpful
Report abuse
See all reviews

NIKHIL MEHTA
5.0 out of 5 stars Science and Art in Cooking
Reviewed in the United Kingdom on 9 November 2020
Verified Purchase
A very innovative approach to cooking. Nik’s selection of flavours (I’m in the UK so I include the “u” in that word!) was outstanding in Season and that continues in this book. His recipes should not be confined by being labelled “Indian”, “Chinese” etc. They really are global. And the science encourages you to experiment according to your own taste so you never need to follow any recipe blindly again.
Read more
2 people found this helpful
Report abuse

D. Panchal
3.0 out of 5 stars Nice photography, not so much science.
Reviewed in the United Kingdom on 21 November 2020
Verified Purchase
Fantastic photography, but not quite the book I thought it would be. The scientific parts aren't so thorough, and only mention chemical names with a brief introduction to how they interact. Recipes are a bit strange too.
Read more
Report abuse

Vandana
5.0 out of 5 stars It's a fantastic book
Reviewed in the United Kingdom on 18 November 2020
Verified Purchase
It's a truly fantastic book, the writing is superb. The pictures are even better. Wish Nik would sell his photos.
Read more
Report abuse

N
5.0 out of 5 stars My new favourite cookbook
Reviewed in the United Kingdom on 26 February 2021
Verified Purchase
This is a great, detailed and easy to follow book. I have made 3 recipes on repeat. (Chicken wings, lamb koftas in almond gravy and grilled romaine lettuce).

These recipes have been easily adjusted to do on the keto diet, so I am having a lot of fun with it.
Read more
Report abuse

Suzanne Bowen
5.0 out of 5 stars Fabulous meticulous information in a beautiful format
Reviewed in Canada on 20 December 2020
Verified Purchase
Fabulous meticulous information in a beautiful format. Every page is a treat!
LOVE Nik Sharma's intelligent, informative, artistic book. Can you guess? I now am a total fan!
Read more
Report abuse
See all reviews
Back to top
Get to Know Us
Make Money with Us
Let Us Help You
And don't forget:
© 1996-2021, Amazon.com, Inc. or its affiliates