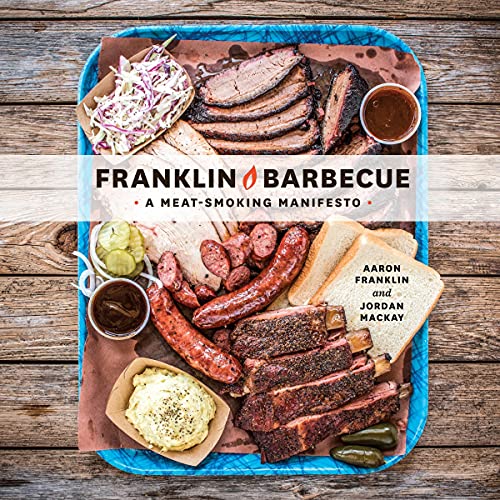 A complete meat- and brisket-cooking education from the country's most celebrated pitmaster and owner of the wildly popular Austin restaurant Franklin Barbecue.

When Aaron Franklin and his wife, Stacy, opened up a small barbecue trailer on the side of an Austin, Texas, interstate in 2009, they had no idea what they’d gotten themselves into. Today, Franklin Barbecue has grown into the most popular, critically lauded, and obsessed-over barbecue joint in the country (if not the world) - and Franklin is the winner of every major barbecue award there is.

In this much-anticipated debut, Franklin and coauthor Jordan Mackay unlock the secrets behind truly great barbecue and share years’ worth of hard-won knowledge. Franklin Barbecue is a definitive resource for the backyard pitmaster, with chapters dedicated to building or customizing your own smoker; finding and curing the right wood; creating and tending perfect fires; sourcing top-quality meat; and, of course, cooking mind-blowing, ridiculously delicious barbecue, better than you ever thought possible.

This audiobook contains a conversation with the authors.

Read more
©2015 Aaron Franklin and Jordan Mackay (P)2021 Random House Audio
Previous page
Next page
Learn more about membership
By completing your purchase, you agree to Audible’s Conditions Of Use and Privacy Notice.
Sold and delivered by Audible, an Amazon company
Share

4.8 out of 5 stars
4.8 out of 5
8,242 global ratings
How are ratings calculated?
To calculate the overall star rating and percentage breakdown by star, we don’t use a simple average. Instead, our system considers things like how recent a review is and if the reviewer bought the item on Amazon. It also analyses reviews to verify trustworthiness.

barpe1
5.0 out of 5 stars Philosophy and Brisket!
Reviewed in Australia on 23 January 2021
Verified Purchase
This is not a conventional cookbook full of menus but a wonderful story of achievement and years of experience that can only benefit the serious smoker. Highly recommended.
Read more
Helpful
Report abuse

S Clark
5.0 out of 5 stars Great read if you are interested in American BBQ
Reviewed in Australia on 5 March 2020
Verified Purchase
Franklin writes a great story of his BBQ adventures. I have really enjoyed reading the book and have become better at BBQing the American way as a result.
Read more
Helpful
Report abuse

clancy morley
2.0 out of 5 stars average
Reviewed in Australia on 12 October 2020
Verified Purchase
I thought this book would have some reciepts or cooking time and not just a book about the guys bbq/smoking experience!
Read more
Helpful
Report abuse

Kindle Customer
5.0 out of 5 stars Good information
Reviewed in Australia on 14 January 2021
Verified Purchase
New smoker tips on what cuts are needed a little different being American than what us Aussie’s smoke our meat
Read more
Helpful
Report abuse

Jan
5.0 out of 5 stars must read for anyone that wants to use wood to smoke
Reviewed in Australia on 11 February 2019
Verified Purchase
best cookbook I have ever read. I now know so much more then before, just come come looking for recipes
Read more
Helpful
Report abuse

Nathen Morgan
5.0 out of 5 stars Exactly as advertised!
Reviewed in Australia on 30 January 2019
Verified Purchase
Bought it as a gift for my Dad, he loves it.
Read more
Helpful
Report abuse

Dan G
5.0 out of 5 stars ‘The Off Set Smoker BBQ Bible’
Reviewed in Australia on 9 September 2018
Verified Purchase
If you’re serious about off set smoker BBQ’s, then this is the book you need to read.
Read more
Helpful
Report abuse
See all reviews

CQ
2.0 out of 5 stars More for serious bbq smokers!
Reviewed in the United Kingdom on 22 July 2018
Verified Purchase
I found the contents of this book disappointing by comparison with other books available for purchase at the same price.
A lot of subject matter is about the author and his restaurant interspersed with some information a beginner may find useful. The specific details seem lacking in many areas as if the author is more interested in protecting and plugging his business. It isn't until page 134 that the reader is finally provided with some recipes. These are written in a good level of detail but are provided in short supply - I counted 4 meat recipes, a smattering of sides and sauces yet other sections go into great detail about smokers and how to make one. The logic one would apply would be if I am buying and reading a book about bbq smoking I am not likely to have the experience that I am at the semi pro stage of fabricating my own smoker from scratch!
If you are new to bbq smoking (such as many over here in the UK) this is not the book for you.
If this is a serious hobby for you and you want to take your abilities to new levels then read this book.
Read more
39 people found this helpful
Report abuse

Mikeyvegas
5.0 out of 5 stars Complete idiots guide to Texas bbq / smoking
Reviewed in the United Kingdom on 10 August 2020
Verified Purchase
This is a review for Franklin’s barbeque guide. When we talk about barbeque in Texas, it’s not the same thing as barbeque in the UK. In texas barbeque is a smoking process where one has a fire in one area and a cooking grate in another and the smoke from the fire passes over the meat at quite low temperature to cook. The meat absorbs the smoke flavour and cooks very slowly, rendering fat and producing succulent flavoursome results.

In The UK barbeque is cooking directly over a heat source outside - in texas they call this grilling, and in England we call Texas barbeque smoking.

OK now that’s cleared up let’s get to the book. Franklin has a restaurant in Austin Texas that has lines of people up the street every day. He is famous for the quality of his smoked brisket and ribs. He is thought of as a genius who has some black art secrets to making his food so good. In this book he shares those secrets. In fact more than that, he tells you “How to” from making a smoker from scratch right through purchasing meat, preparing, cooking, cutting serving, cooking accompaniments. The whole deal. So theoretically if you read and execute everything in this book your food will be as good and identical to his. Now I can’t claim to have achieved quite that, but his guidance certainly corrected many basic errors I was making.
Read more
6 people found this helpful
Report abuse

BadGene
5.0 out of 5 stars More philosophy than recipe, this is the fundamental text for bbq
Reviewed in the United Kingdom on 28 April 2020
Verified Purchase
Don't expect loads of recipes in this book. It's not about that - it's got a few for sure but this is a master of his craft passing on his wisdom with humour, humility and a passion that shines through.

BBQ is not about "put this rub on, cook for this long", it's about feel, about care and attention to all the variables: smoker, wood, fire, meat, rub and time. Franklin shares his insight hard won through years of perfecting his craft and encourages you to find your own way of getting that perfect brisket.

And got to say cooked the best brisket I've done yet, 203 is indeed magic.
Read more
8 people found this helpful
Report abuse

Ben
5.0 out of 5 stars A MUST OWN FOR SMOKER / BBQ ENTHUSIASTS
Reviewed in the United Kingdom on 12 July 2019
Verified Purchase
This book is not full of hundreds of recipes that you won't use - it concentrates on a few amazing dishes that the chef is renowned for creating and dedicates pages into how you can achieve these results yourself!
Half the book I used to learn ALOT about smokers, wood and fires and the other half is a 'go to' reference point for when I'm cooking!
Read more
6 people found this helpful
Report abuse

Spyda
5.0 out of 5 stars Great technical information
Reviewed in the United Kingdom on 5 June 2020
Verified Purchase
Great book lots of technical information about bbq Smokers including picking building and modding, aslo a few simple recipes given as a starting point to allow you to create your own tasty food.... The way its written is easy to understand and keeps you interested.. Great book for the more technical aspects of smoking.
Read more
2 people found this helpful
Report abuse
See all reviews
Back to top
Get to Know Us
Make Money with Us
Let Us Help You
And don't forget:
© 1996-2021, Amazon.com, Inc. or its affiliates