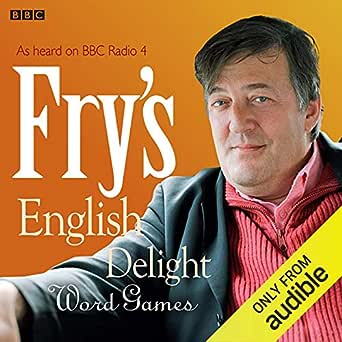 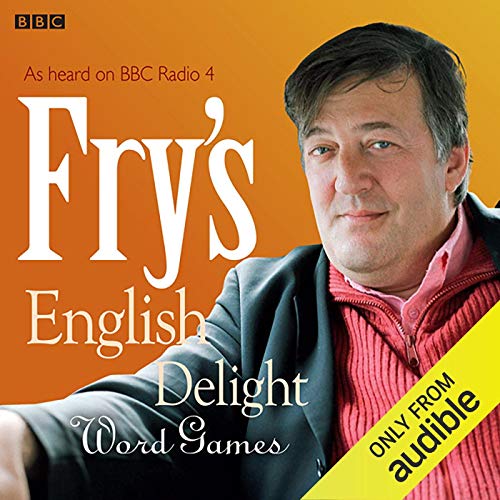 3.8 out of 5 stars
3.8 out of 5
50 global ratings
How are ratings calculated?
To calculate the overall star rating and percentage breakdown by star, we don’t use a simple average. Instead, our system considers things like how recent a review is and if the reviewer bought the item on Amazon. It also analyses reviews to verify trustworthiness.

Chris Hall
3.0 out of 5 stars For a one-off listen it's certainly interesting, but does it warrant an audiobook release?
Reviewed in the United Kingdom on 8 August 2011
Vine Customer Review of Free Product( What's this? )
First broadcast on BBC Radio 4 back on the 28th December 2010, Stephen Fry's special on 'Word Games' from the popular 'English Delight' series, later saw an exclusive extended edition release into audiobook format.

Running for just over 49 minutes (although marked as having a running time of 1 hour), the audiobook which is presented by Stephen Fry, takes the listener through a reasonably interesting discussion on the delights of the English language. Fry attempts to examine whether or not the English language is an innately playful language. The audiobook takes a somewhat brisk tour through some of the most popular word games that incorporate the enjoyable play with the English language, as well as the time-tested popularity of riddles, pangrams and limericks to name but a few. Throughout the audiobook the imaginative play of wordage is clumsily (and often erratically) dissected over the ensuing 49 minutes, with segments and chapters not really meeting any eventual finality or satisfying conclusion.

Humour is surprisingly infrequent and only light and overly subtle when it does immerge. This is a shame as the subject matter does need a more witty touch to be applied to keep the listeners interest and engagement throughout its moderate length - particularly if being played whilst 'on the move'.

However, the real question that immediately must be asked is whether or not this really should have been given its own standalone release as an audiobook? Does the content really warrant repeated play? Is there really enough in the discussion to be anything more than a reasonably informative and enjoyable listen from the radio? For me, I'd have to say the answer is no on all accounts.

Although it is moderately interesting and informative, it is nevertheless the sort of thing that you would only really listen to the once. I certainly cannot envisage picking the CD back up off the shelf in the foreseeable future. Perhaps in a number of years, if I were to stumble across it on the shelf and fail to remember much of its content. But for me that certainly doesn't justify itself as a good purchase.

So that's the audiobook in a nutshell for me. For a one-off listen it's quite interesting (pardon the Stephen Fry pun) and moderately informative, with the odd chuckle scattered about here and there, but little else. For anything more (as a purchasable audiobook suggests) it's sadly lacking in any repeatable-listen qualities. But then that's possibly just my opinion!

Here's the audiobooks complete tracklisting to give you a further idea of the content:

1. Palindromes, Pangrams, Charades and a Riddle
2. Is English as a Language Especially Game for a Game?
3. A Challenge
4. A Riddle and Some Cheese
5. Word Games are Good for you
6. Word Association
7. Answers
8. An Enigmatist Speaks
9. Dropouts
10. Crosswords and Other Stuff
11. The Beauty of =
12. The Frame Game
Read more
One person found this helpful
Report abuse

David Spanswick
3.0 out of 5 stars To pun or not to pun? An introduction to the fun of word play
Reviewed in the United Kingdom on 27 July 2011
Vine Customer Review of Free Product( What's this? )
From the very much intended pun in the title and the fruity delivery from the QI question master you know that you are in for a delight to the ear and to the intellect.
"word games" appears to define a very English preoccupation from the daily cross word to the party game of Charades.

In this extended,/attenuated/ lengthened/elongated/ augmented episode of the Fry Christmas Show our Stephen jumps about all over the place to discover/unearth the hidden joys of the language/tongue that have brought so much pleasure/amusement
to our literary ancestors since time immemorial. OK I will let the Thesaurus rest now though the temptation is so great when writing a review about the sheer joy of playing with words.

Historically, it would appear that puns are some of the earliest jokes, not to mention some of the corniest and are practically impossible to translate into another language as they simply don't work. Are there languages that are unpunnable I wonder? And who was the first writer to have enough time on his hands to toy with the palindrome or the pangram. After hearing about this latter it is almost impossible not to attempt one for yourself. Go on, if you are reading this you are considering buying the CD and should know that a pangram is a sentence that contains every letter of the alphabet once and others not so very often.

Riddles, too, have always been a fascination to the reader as witnessed in modern books ranging from Dan Brown to J.K.Rowling and the story of the enigmatist appointment ( though unsalaried) does tempt one to change the direction of one's career or, at the very least, one's hobbies.

The treasure Hunt, too, has long been a fascinating pastime of the idle classes and maybe we are overdue for a return of this oh so very English clue-laden pursuit which also might explain our continued absorption of the crime thriller and its televisual counterpart. There must be something to explain Midsomer Murders surely.

Our language as explained by Fry & Co ~ there are extensive guest appearances by language experts, comedians, intellectuals, academics et. al ~ is one rich with nuance that can be used not only in relaxation but also in therapy not to mention creativity.

This CD recording both amusing and educational is just long enough for a frustrating commute into the city by train, bus, car or bike though probably not one that you will need to hear very often but hopefully will give you a renewed enthusiasm to examine the every day tool of communication
Read more
Report abuse

M. J. Robinson
4.0 out of 5 stars Stimulating CD for a commute
Reviewed in the United Kingdom on 28 July 2011
Vine Customer Review of Free Product( What's this? )
The CD Fry's English Delight Word Games makes for a stimulating commute to and from work. I played the CD three times in one week.

First and foremost the content of the CD is intrinsically interesting. Pangrams and palindromes, riddles, cryptic crosswords, Scrabble and other word games are discussed with input from linguistics experts and entertainers. The programme is intellectually stimulating and contains some fascinating facts e.g. about codebreakers or about the riddle of the Sphinx. Stephen Fry's voice is ever soothing, easy to listen to and he is very entertaining.

The second reason I listened to the CD again is basically because there were some continuity issues - the editing was a little erratic at times. However, the second time it was easier to link the intricate threads of the discussion.

The third reason was so that I could work out some of the pangrams and palindromes for myself and attempt to create some of my own. So there was certainly a spin-off from listening to the CD. I am considering doing cryptic crosswords once more!

Would I play the CD again? Not for some while but yes, as with all such recordings of this nature they are replayable after some time has passed. Would I buy the CD for a friend? I doubt it.

This CD is best aimed at those who adore considering the creativity of the English language, are fans of Stephen Fry or want to be intellectually stimulated for one hour on the daily commute.
Read more
One person found this helpful
Report abuse
See all reviews
Back to top
Get to Know Us
Make Money with Us
Let Us Help You
And don't forget:
© 1996-2021, Amazon.com, Inc. or its affiliates