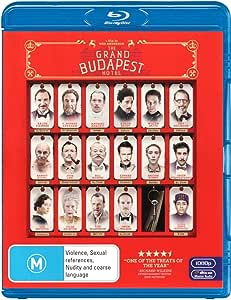 The Grand Budapest Hotel recounts the adventures of Gustave H, a legendary concierge at a famous European hotel between the wars, and Zero Moustafa, the lobby boy who becomes his most trusted friend. The story involves the theft and recovery of a priceless Renaissance painting and the battle for an enormous family fortune -- all against the back-drop of a suddenly and dramatically changing Continent.

A dream is born

20th Century Fox’s story begins in a tiny theater on New York’s Lower East Side. In 1904, fresh from Hungary, 25-year-old William Fox amazed audiences with his magical hand-cranked films. The beginnings were humble – folding chairs, a painted wall for a screen – but the desire to entertain and move people has been at the core of what 20th Century Fox has been doing ever since. By 1915 Fox’s five-cent movie shows were wildly popular and his single screen grew first into a chain of 25 theaters around New York City and then into a movie making business.

THE GRAND BUDAPEST HOTEL recounts the adventures of GUSTAVE H., a legendary concierge at a famous European hotel between the wars; and ZERO MOUSTAFA, the lobby boy who becomes his must trusted friend. The story involves the theft and recovery of a priceless Renaissance painting, a raging battle for an enormous family fortune; a desperate chase on motorcycles, trains, sleds, and skis; and the sweetest confection of a love affair - all against the backdrop of a suddenly and dramatically changing Continent.

4.6 out of 5 stars
4.6 out of 5
4,050 global ratings
How are ratings calculated?
To calculate the overall star rating and percentage breakdown by star, we don’t use a simple average. Instead, our system considers things like how recent a review is and if the reviewer bought the item on Amazon. It also analyses reviews to verify trustworthiness.

Impatient.
1.0 out of 5 stars Bewildering.
Reviewed in Australia on 19 September 2020
Verified Purchase
This film that garnered so many awards left me so disappointed. Breathtakingly underwhelming.
Read more
Helpful
Comment Report abuse

ali
5.0 out of 5 stars My favourite film
Reviewed in Australia on 13 November 2019
Verified Purchase
I have always loved this movie
Read more
Helpful
Comment Report abuse

E. A. Solinas
TOP 500 REVIEWER
5.0 out of 5 stars There are still faint glimmers of civilization left in this barbaric slaughterhouse that was once known as humanity...
Reviewed in Australia on 28 February 2018
The world of Wes Anderson is a strange place -- a place of slightly decayed elegance, wicked dark comedy and a light layer of bittersweetness.

And no movie seems to sum up that style as effectively as "The Grand Budapest Hotel." Anderson's eighth movie is like an antique music box -- an elaborate miniature world of smooth prettiness and Old World charm, with little dancing silver figures moving through their paces. The corkscrew quest of the main characters gets a bit slow at times, but the direction and acting are utter perfection.

A young girl appears at a cemetery monument, holding a book written by The Author (played by Jude Law as a young man, and Tom Wilkinson as an old one). The book tells of how he met the wildly wealthy Zero Moustafa (played by F. Murray Abraham as a young man, and Tony Revolori as a young one) at the Grand Budapest Hotel, and Zero's explanation of why -- despite his vast wealth -- he stays in a tiny cramped room even though he owns the place.

In his youth, Zero was a lobby boy working under Monsieur Gustave H. (Ralph Fiennes), the hotel concierge who also lavished... um, "attention" on rich elderly blonde ladies. When Madame D. (Tilda Swinton) dies on a trip back home, Gustave and Zero show up for the will reading... and everyone is shocked (and angry) that she left the priceless "Boy with Apple" painting to Gustave. Her thuggish son Dmitri (Adrien Brody) is particularly displeased.

So Gustave sneaks "Boy With Apple" out, only to be accused of poisoning Madame D and thrown in prison. Around this time, the country also breaks out into civil war. With Zero's unflagging help, Gustave may have a chance to escape prison... but can the duo also escape a brass-knuckled assassin (Willem Dafoe), avoid the fascist army, buck murder charges AND get the painting back?

"The Grand Budapest Hotel" is set in a Europe that never was. It's in a fictional country called Zubrowka, which seems to have a lot of snow, mountains and rich old ladies. This allows Wes Anderson to give the movie almost the air of a bittersweet fairy tale where happy endings don't last. Eventually someone dies, and all you can do is hold on to whatever memories of joy you once had.

But it's not all bittersweetness. Most of the story -- set within two separate frameworks -- is a wry, dark comic caper about serial murders and a valuable painting, which corkscrews around various wacky escapades before finally settling back at the titular hotel. Anderson wrings a lot of humor from the macabre (Deputy Vilmos Kovacs and his lost fingers), adding awkward whimsy into even the darkest escapade ("Who's got The Throat-Slitter?").

And it's simply... beautiful. Beautiful like a storybook that doesn't have to be realistic. The alpine scenery, the quaint little towns, the strangely alluring Grand Hotel Budapest -- both in the past (elegant and luxurious without being rococo) and the past-present (a slightly decayed citadel, like an aging dowager). While Anderson sticks with his static, centered shots and sharp transitions, he still manages to linger on the slightly unreal beauty of his sets.

It's also one of the few movies that has an all-star cast that actually WORKS, rather than just racking up studio points. Ralph Fiennes is simply perfect as Gustave, a man who is all contradictions -- noble and scheming, kindly and selfish, an adventurer who truly cares for the people he takes advantage of. And he clicks perfectly with Revolori, who plays a squire to Fiennes' knight -- an earnest young lad whose ambition seems to be to be a slightly more moral version of Gustave.

And all the smaller roles work beautifully too -- an unrecognizable Swinton (seriously, you can't even tell it's her), Law, Abraham, Edward Norton as a Communist commander, Jason Schwartzman, Dafoe, Saoirse Ronan as Zero's beloved, Jeff Goldblum, and Adrien Brody as a tantrum-throwing thug who has just enough quiet menace to avoid being silly.

It will take considerable effort from Wes Anderson to top "The Grand Budapest Hotel" -- an elegant, bittersweet little story within a frame whose gilding has started to flake off. Laugh, cry, and eat tiny little gourmet cakes.

cora
4.0 out of 5 stars Style Over Substance
Reviewed in the United Kingdom on 9 October 2018
Verified Purchase
This is a beautiful and very entertaining film with a truly remarkable all star cast. Everybody who is anybody in the world of contemporary screen acting seems to be in this. But however enticing it is to see all those big names in the same film, the concept is not without its problems. Apart from Ralph Fiennes, the then practically unknown Tony Revolory and possibly Saoirse Ronan, the stars don't really get as much screen time as they deserve and I was left wanting to see more of most of them. Much more. Because the acting is flawless throughout. Down to the smallest supporting parts, everybody is on top of their game. And they all look absolutely fabulous in those amazing costumes.

Like the costumes, the sets are stunningly beautiful. Everything is so highly stylized as to be exaggerated - befitting for the setting inside a luxury hotel, a place where reality is suspended the moment you enter. Visually, the film is a masterpiece. Every frame is composed down to the last detail. It's a joy to watch. The story is fun, especially the more whimsical moments, but I must admit that I couldn't get emotionally invested in the fate of the characters. For me, this one is style over substance. Great entertainment, I enjoyed watching it, enjoyed Ralph Fiennes' amazing performance, loved the music, but the thing I remember most are the sets and costumes.

Paul the other one...
5.0 out of 5 stars Excellent
Reviewed in the United Kingdom on 18 December 2019
Verified Purchase
I’m not sure why I do this... Even though I have already seen this film through means of streaming, I still want to own it, and most probably never watch it. I think it’s a man thing, we like hunting, if not buffalo anymore then it’s records and dvds. The fact I bothered getting a hard copy means I think highly of it, as I’ve been scaling down my dvd collection of late. But this is not reversing the trend. So to all those collectors out there, it’s worth having in your collection in my opinion.
Read more
One person found this helpful
Report abuse

DOPPLEGANGER
5.0 out of 5 stars KEEP THE OLD LADIES HAPPY!
Reviewed in the United Kingdom on 22 February 2015
Verified Purchase
A breath of fresh air, originality, hilarity, and fine acting in this marvellous romp starting in the hallowed portals of the old world epitome of splendour and elegance The Hotel Budapest. The cast is superbly led by Ralph Fiennes, playing the hotel general manager who does whatever is necessary to keep his older female guests happy, contented and returning.

It is when one of his 'older very wealthy dear ladies' dies and leaves her considerable fortune to him, much to the anger of her very large extended family, that frantic events, murder and wild chases take place, that are in the tradition of The Blues Brothers, Indiana Jones and The Pirates of The Caribbean chaotic chase scenes.

'Hammy' overacting, earthy language, and exuberant fantasy-like sets are the order of the day in this film which is very funny, gripping and excellent entertainment.

Anna Nimmo-Tee
1.0 out of 5 stars Did i get a spoof film, as it cant be what the 5 star reviews saw
Reviewed in the United Kingdom on 6 February 2020
Verified Purchase
Enjoyed 5 mins and the rest went downhill. So thought this looked an hysterical watch from the trailer.
Unfortunately, this film rates alongside my first long term relationship. I went into it, all excited and with great expectations, but unfortanately it was lacking, a bit like my ex:-(.
Read more
Report abuse

Starpup
5.0 out of 5 stars But then I love weird so this is right up my street
Reviewed in the United Kingdom on 1 December 2015
Verified Purchase
But then I love weird so this is right up my street. You can't look away from this film for a second. The sets are incredible huge windows into a brightly coloured and fast moving world. A tiny figure wrapped in fur hurries through the snow. A hotel manager watches from a tiny window to observe the staff in reception. Flamboyant and over dramatic. Blackly hilarious. Fascinating characters and a storyline that does anything except what you might expect.
Read more
3 people found this helpful
Report abuse
See all reviews
Get FREE delivery with Amazon Prime
Prime members enjoy FREE Delivery and exclusive access to movies, TV shows, music, Kindle e-books, Twitch Prime, and more.
> Get Started
Back to top
Get to Know Us
Make Money with Us
Let Us Help You
And don't forget:
© 1996-2020, Amazon.com, Inc. or its affiliates