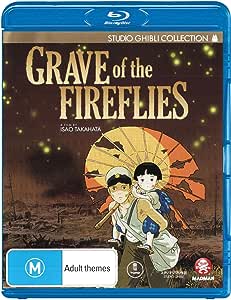 Grave Of The Fireflies (Blu-ray)

In the aftermath of a World War II bombing, two orphaned children struggle to survive in the Japanese countryside. To Seita and his four-year-old sister, the helplessness and indifference of their countrymen is even more painful than the enemy raids. Through desperation, hunger and grief, these children's lives are as heartbreakingly fragile as their spirit and love is inspiring.

Grave Of The Fireflies

A Tale Of The True Tragedy Of War And Innocence Lost.

In the aftermath of a World War II bombing, two orphaned children struggle to survive in the Japanese countryside. To Seita and his four-year-old sister, the helplessness and indifference of their countrymen is even more painful than the enemy raids. Through desperation, hunger and grief, these children's lives are as heartbreakingly fragile as their spirit and love is inspiring.

4.8 out of 5 stars
4.8 out of 5
1,607 global ratings
How are ratings calculated?
To calculate the overall star rating and percentage breakdown by star, we don’t use a simple average. Instead, our system considers things like how recent a review is and if the reviewer bought the item on Amazon. It also analyses reviews to verify trustworthiness.

Richard
5.0 out of 5 stars Grave of innocence.
Reviewed in the United Kingdom on 26 October 2016
Verified Purchase
No matter who we may blame for a war, there's no disputing the fact that people suffer the consequences in very similar ways and films such as this can apply to all of us if we're unfortunate enough to be on the receiving end of conflict. As a result it is very easy to identify with and "inhabit" the two siblings, Seito and Setsuka, enduring a life of extreme hardship as they are handed between carers and finally left to their own devices in a country where the fabric of society itself is unravelling as even the adults feel vulnerable and abandon the children to their fates.

Although the opening telegraphs the finale, there's a sad truth in the storytelling that makes you concerned about knowing how these two young people came to their end in such terrible circumstances and, without being heavy-handed, the film shows us the preciousness of our early years and the magic that ought to be within that time, and sets it directly in opposition to the horrors going on around these children. When Setsuka asks why fireflies should die so soon, it is a genuinely heartbreaking moment that the biggest-budget blockbuster would find very hard to emulate, because its "childlike" simplicity reaches right inside us. As by now we are inhabiting the children's experiences it actually hits quite hard and I at least was left with a real sensation of helplessness that must have matched Setsuka's.

There's no way to compare this with other Ghibli films except in the storytelling and the animation, and the absorbing and at times genuinely threatening storyline. These elements can be found elsewhere too, such as in Spirited Away and Howl's Moving Castle, but here the Ghibli storytelling genius makes a far darker story that leaves us wondering why we do so much to threaten the wellbeing of people when, as I said earlier, we all suffer in the same way.

Fabulous film with its point very well made.

Mr. A. Osborne
5.0 out of 5 stars An animated FILM, not a cartoon.
Reviewed in the United Kingdom on 20 December 2010
Verified Purchase
If you think all animated films are cartoons, then this will be the film to change your mind, this is a deeply touching movie that happens to be animated, this film is closer to Shindler's list than to any Disney film, also if you are expecting a ' Spirited Away [DVD ]' or a ' Kiki's Delivery Service [DVD ]' then you will be surprised, this is not a fantastical journey, there are no talking cats, or troublesome witches, this is a serious drama with a real thought provoking message.

I have to say that this has got to be the most emotional film I have EVER seen! Never has a film made me fill up quite this much, not even when I watched Watership down in primary school, when I was eight.

I am at a loss... I was So drained from watching this! This made a 30yo skinhead 'bloke' cry, I had to really force my self to watch the end of this film not because it has any faults in the style or plot, but rather from the outset you know what is going to happen and I realised that the story had drawn me in so deeply and I knew what it was going to do to me...

Glad I did watch to the end, it is rare to find a film of this genre that can move so many people to tears, it is a film that can really tug at your emotional chords with such precision and vigour, I really don't think I will be able to see fruit sweets again without flashbacks!
An absolutely astounding film.

I may suggest that perhaps you rent this title, unless like me you like lending DVD's out, I think a lot of the 5-star reviewers would also agree, that this is not a film I can see me ever watching again, like I said this is one of the greatest films I have ever watched, but it was so good, that the film will always be with me, I will never be able to forget Seito and Sweet Setsuko, the little sister I think we all wished we had... But this is a must see for any fan of cinema, not just Ghibli, this is a master class in cinema, in drawing your audience in, making them empathise with the characters and ultimately making them genuinely feel something.

This film has changed me, I don't know how, but it has, I think it has put a lot in my life in to perspective, and 2 months on from seeing this film I have just shed another tear for it.

This really is a must see/buy, it is dubbed which I know is important to some people, but I think seeing this in its original Japanese added something for me, I think a number of people would disagree with me, but few would say that you shouldn't watch it. Do note though that if I were you I would make sure I had a comedy film to follow this, or at least a more light hearted film, as you do not want to end your night with the emotions that this will draw from you.
Read more
48 people found this helpful
Report abuse

Lotarugg
5.0 out of 5 stars Unbearable, beautiful and important
Reviewed in the United Kingdom on 23 March 2015
Verified Purchase
I’m generally unmoved by tearjerkers so it came as big shock to me how much this animation affected me. I’ve seen a lot of anti-war films, read a lot of WWI accounts of the trenches but nothing has made me more of a pacifist that this film. It captures, almost perfectly, childhood innocence in the face of war. War made, as all wars are, by pride filled adults. Children haven’t really had much of a voice when you consider the history of war films but this film more than compensates and tells what is probably not an uncommon tale of those caught up in war.

At the end you just want it to be different, like you might wish that all the horrors of war had never happened and that’s why this film is such a work of genius. It is almost unbearable.

Immediately after watching this film I signed up to make monthly donations to UNICEF, what more can a film do?
Read more
3 people found this helpful
Report abuse

Maimail
5.0 out of 5 stars A masterful depiction of horrors of war
Reviewed in the United Kingdom on 24 September 2019
Verified Purchase
Another great master piece by the late master of all animations. The story unfolds to the real horrors of war and its after effects, and this truly brings out the in depth imaginary of what it was like being in such harsh and human depravity environment. Great pictures and great story told that can reduced you to tears to the plight of the two main characters.
Read more
Report abuse

Stella Starnes
5.0 out of 5 stars an incredibly moving film
Reviewed in the United Kingdom on 31 August 2010
Verified Purchase
Although this is age rated and has some violence and gore, that doesn't prevent "Grave Of The Fireflies" from being an amazing story. The main characters, Seita and his little sister Setsuko are so easy to sympathise with and are very loveable, Seita because he's always trying to keep the two of them together throughout their adventures, and Setsuko because she's a beautiful child and has a bubbly personality. The fact that this film centres on children during wartime shows that it is not only adults who are badly affected and just how many youngsters end up homeless and afraid. There are many moments in which you can't help but cry when they experience bad things, but for me the scene which makes me weepy is when they're surrounded by fireflies at the very end since they're not alone, they've got each other and are happy in each other's company. I think that is what's needed in a good film, especially as children would probably want to watch "Grave Of The Fireflies", and would want to know that it ends on a happy note. "Grave Of The Fireflies" may seem too sad, hence the title, but it's not overly sentimental because that is not Studio Ghibli's style, and is very deep and true, with a wonderful message to give to people who love the film. For particular fans of Studio Ghibli who enjoy a film that touches on the hardships of life with absolute clarity without making fun of them, this is a DVD to connect with and make one feel lucky for what we have when so many people did not get much in the war.
Read more
3 people found this helpful
Report abuse
See all reviews
Get FREE delivery with Amazon Prime
Prime members enjoy FREE Delivery and exclusive access to movies, TV shows, music, Kindle e-books, Twitch Prime, and more.
> Get Started
Back to top
Get to Know Us
Make Money with Us
Let Us Help You
And don't forget:
© 1996-2020, Amazon.com, Inc. or its affiliates