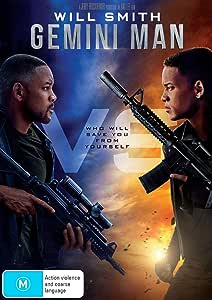 Returned hit-man Henry Brogan (Will Smith) is forced on the run by a young, highly skilled operative who will stop at nothing to eliminate his target. Now on a race around the globe, Henry must outsmart the mysterious assassin at every step--but how far will he go once they finally come face to face?

Evan
4.0 out of 5 stars An interesting visual experiment that probably only works projected or in 3D
Reviewed in Australia on 4 June 2020
Verified Purchase
I am not going to review the film - there are other sites for that. I am going to review the disc though because I have been pondering over this one since I saw it. The movie was shot in 4K 3D at 120fps and has been presented on this disc in 4K at 60fps. I am not a high frame rate hater, but I am not sure that this was the right choice. 120fps is a multiple of the traditional film frame rate of 24fps. 60fps is not - it is the traditional video frame rate in the US and many other locations. By choosing this frame rate, the 4K UHD starts to look more like video than like film, contrary to the intention of the filmmaker who was clearly trying to make an image that was a hyper realistic film image. At a multiple of the traditional film frame rate, that might have been achieved. But at 60fps it becomes an image more closely associated with video for television or video games. I do wonder whether the creators of the disc would have done better to choose 48fps as the frame rate, as that would have at least been consistent with the intent of the filmmaker to use a high frame rate at a multiple of the film frame rate, and still within the HDMI 2.0 spec. In any event, the 60fps frame rate was chosen and without a doubt this does not look “right” on any kind of direct display I have tried it on. However, projected on a big screen, by which I mean 100” or greater, and the image is not nearly as objectionable because your brain doesn’t automatically associate the projected image with video the same way as it does when looking at a direct display. Sure, it does not look like film, but it does not look like a promo reel in an AV store when it’s up on a screen that big, either. I wish this disc was released in Australia in 3D 24fps because I also suspect, having watched this once through and then gone back to watch some scenes again, that the 3D presentation, whatever the frame rate, would be more in keeping with the filmmaker’s intent. Of course, 3D has been dropped from most direct displays, but it is alive and kicking on projection displays, which makes sense really, given the nature of 3D. Projected, I thought this disc looked excellent, and I managed to suspend my disbelief sufficiently to get into the movie. On a direct display, I suspect that that will be very hard. In any event, this one is worth picking up for enthusiasts, but for anybody else, I recommend the standard 24fps Blu-Ray until the 3D becomes available in Australia.
Read more
Helpful
Comment Report abuse

Kadlin
2.0 out of 5 stars The 4k version is not what I expected
Reviewed in Australia on 21 January 2020
Verified Purchase
This is the first 4k UHD that I switched over mid viewing to Blu-ray. The 4k version is presented in 60p (60 frames per second). This provides some incredible film moments during action sequences, the other effect was a hyper real viewing environment. The image was so sharp and smooth that I couldn't remain engaged with the film. It's a strange and disconcerting effect.

It's disappointing that a standard frame rate of 24p was not included for 4k and not just the Blu-ray.

As a movie I found it easy enough to enjoy the ride.

Shane S.
TOP 100 REVIEWER
4.0 out of 5 stars Brilliant transfer
Reviewed in Australia on 11 June 2020
Verified Purchase
At 4k 60fps it is literally a great transfer especially when listening with Atmos. It does however have an average script and plot but is somewhat Dave by good acting. If it's cheap pick it up but not if the price is high.
Read more
Helpful
Comment Report abuse

Kris
5.0 out of 5 stars Top Movie!!
Reviewed in Australia on 25 January 2020
Verified Purchase
Didn't think that this movie would be very good at all but to our surprise Will Smith made this a top movie & of course the best price around!! Very Happy with our purchase!!
Read more
Helpful
Comment Report abuse

J Chang
5.0 out of 5 stars 60 fps movie!
Reviewed in Australia on 1 July 2020
Verified Purchase
Bought this to just for the video quality. Oled tv + this movie == one of a kind movie experience. This is the first time I have seen a movie so clear and crisp. 20 out of 10 for video quality.
Read more
Helpful
Comment Report abuse
See all reviews from Australia
Get FREE delivery with Amazon Prime
Prime members enjoy FREE Delivery and exclusive access to movies, TV shows, music, Kindle e-books, Twitch Prime, and more.
> Get Started
Back to top
Get to Know Us
Make Money with Us
Let Us Help You
And don't forget:
© 1996-2020, Amazon.com, Inc. or its affiliates