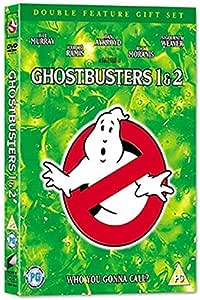 4.7 out of 5 stars
4.7 out of 5
2,363 global ratings
How are ratings calculated?
To calculate the overall star rating and percentage breakdown by star, we don’t use a simple average. Instead, our system considers things like how recent a review is and if the reviewer bought the item on Amazon. It also analyses reviews to verify trustworthiness.

Leigh
5.0 out of 5 stars Region Free - Loads of Features
Reviewed in the United Kingdom on 4 July 2019
Verified Purchase
The item was shipped from the USA and the Steelbook did not get any damage.

Amazon was not too clear on the region code. It said that it was region A only but other websites said that this edition of Ghostbusters was region free.

Knowing that 4K disks are always region free and owning a region A PS3 for American Blu-Ray playback I made the gamble and bought the USA edition as I wanted this version of the Steelbook.

When it arrived the paper sleeve (as seen in picture 3) shows that all disks within the boxset are ABC Coded. I tested the disks in a XboxX as this is my 4K player and found no playback issues.

You may wish to know -
The 4K quality is not great. It's obviously the same digital transfer from the last 4K edition back in June 2016.
My setup is a 55" Bravia 4K Android, 4K HDMI playing from a XboxX, the sound is Sonos 5.1 + Sub. All picture settings are calibrated by myself to the highest standard. Sound has been calibrated by the Apple Sonos "Trueplay". (I'm a fussy guy)

So if you are buying this 4K edition because you wish for a better picture, don't bother. If your wanting the amazing extras including Audio commentary then this is for you!

The human element in these films reads rather like a family tree. They were written by, and star, prolific Canadian actor and comedian Dan Ackroyd and the late American actor and director Harold Ramis. The leading man in both films is Bill Murray, who was directed by Ramis in ‘Caddyshack’ (1980) and again in 1993, in the iconic ‘Groundhog Day’. The rather incestuous nature of these films is completed by the director, Comedy expert Ivan Reitman, a Czech-Canadian who had directed Murray in his first film ‘Meatballs’ (1979), and also ‘Stripes’ (1981). The female lead is Sigourney Weaver, then neatly poised between ‘Alien’ and ‘Aliens’.

The films are generally described as ‘supernatural’ or ‘fantasy’ comedies, set in (and starring) New York. Apparently, Dan Ackroyd was interested in the paranormal. His father had written a book about ghosts, and one of his ancestors was a famous spiritualist. The finished films however, are neither serious in their treatment of the paranormal, nor in the least bit scary. Kids, of all ages, will no doubt continue to enjoy them, as they have always done.

At $25-30 million, GB1 was a seriously expensive film to make, close to 3 x the cost of ‘Gremlins’ also released in June 1984 and the big Michael Douglas vehicle ‘Romancing the Stone’ (March 1984), and over 4 x that of ‘The Terminator’ (October). This was largely to do with the special effects, which were spectacular for the time, and still look impressive today. Filmed in famous New York locations including Central Park, NY Public Library and the Lincoln Centre, with additional scenes captured in LA (including LA’s Central Library for the early library interiors), visually the film is a stunning triumph. The score, written by Elmer Bernstein, is also excellent.

The film was a huge box office hit, became a cultural phenomenon, and with sequels, spin-offs and merchandise, the budget was easily recouped. It regularly features too, in lists of top ‘80s films, top comedies and top summer blockbusters.

But what if you strip out the hype? Certainly, the premise is clever, and the script is full of excellent jokes. The early ghostly manifestations, in the library and the hotel, and the team’s efforts to capture them, are very funny. Some of the characters also work well: Rick Moranis as the anally retentive tax accountant Louis Tully, is brilliant. But I confess to finding Murray almost a caricature of himself here. And towards the end, the direction is less slick, the plot rather fizzles and is totally overrun and outflanked by the effects.

cinemascope
5.0 out of 5 stars Classic Double for a Tenner!!!!
Reviewed in the United Kingdom on 22 September 2014
Verified Purchase
Fantastic deal the 2 movies on Blu Ray for a tenner!!! cost double that at HMV both films look great in 4K remaster and sound for a 30 year old movie fab i remember showing the original film in 1984 when i was a cinema projectionist it did amazing business for several weeks a classic film. The new interviews with Ivan Reitman and Dan Aykroyd are very interesting they both still have a lot of love for the sequel as they go and we also get the great Ray Parker Jr video for the song GhostBusters!!also you get a nice little booklet with lots of background information and pictures on both films. The slimer mode view on the first movie is great picture in picture while you watch the film lots of super memories from director and all the cast including the late Harold Ramis.If you are a fan buy now at this price you wont be disappointed even Mr Stay Puft would smile at this price who you gonna call Amazon right now enjoy!! Mark. Wallasey,Merseyside. 21st Sept 2014.
Read more
7 people found this helpful
Report abuse

By the Beach
2.0 out of 5 stars Burnt stuffing
Reviewed in the United Kingdom on 5 February 2020
Verified Purchase
I brought this to watch on a big projector screen with my 9 yo daughter Christmas Day, having told her that it was a really great film. Well, something has clearly affected my memory as it was an absolute pile of poo. Next year we’ll do the dishes instead, as the challenge of the bottom of the burnt stuffing tray would be far more exciting prospect than watching the sequel, also included with this disc.
Read more
Report abuse

Debi B
5.0 out of 5 stars Ghostbusters classic
Reviewed in the United Kingdom on 13 September 2018
Verified Purchase
I've bought the Ghostbusters 1 & 2 Blu Ray 2 disc set because I love owning the classics. I hadn't realised this is a 30 year Anniversary Edition so I also got a note from Director Ivan Reitman, a fab booklet detailing the making of the 2 movies, original production artwork and bio's of the actors themselves. It's a great set. Well worth having.
Read more
2 people found this helpful
Report abuse
See all reviews
Get FREE delivery with Amazon Prime
Prime members enjoy FREE Delivery and exclusive access to movies, TV shows, music, Kindle e-books, Twitch Prime, and more.
> Get Started
Back to top
Get to Know Us
Make Money with Us
Let Us Help You
And don't forget:
© 1996-2020, Amazon.com, Inc. or its affiliates