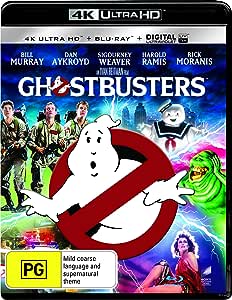 Bill Murray, Dan Aykroyd and Harold Ramis star in this 1980s comedy directed by Ivan Reitman. After their scholastic grant is withdrawn, New York parapsychologists Peter Venkman (Murray), Raymond Stanz (Aykroyd) and Egon Spenler (Ramis) decide to go into business as Ghostbusters. Initially scorned, the trio become celebrities after ridding a hotel of a troublesome ghoul, and are called in by musician Dana Barrett (Sigourney Weaver) when she experiences strange disturbances in her Central Park apartment.

Ghostbusters makes its long-awaited return, rebooted with a cast of hilarious new characters. Thirty years after the beloved original franchise took the world by storm, director Paul Feig brings his fresh take to the supernatural comedy, joined by some of the funniest actors working today – Melissa McCarthy, Kristen Wiig, Kate McKinnon, Leslie Jones, and Chris Hemsworth. They’re here to save the world!

4.7 out of 5 stars
4.7 out of 5
1,159 global ratings
How are ratings calculated?
To calculate the overall star rating and percentage breakdown by star, we don’t use a simple average. Instead, our system considers things like how recent a review is and if the reviewer bought the item on Amazon. It also analyses reviews to verify trustworthiness.

B. Chandler
TOP 50 REVIEWER
5.0 out of 5 stars "Yes it's true; this man has no dick."
Reviewed in Australia on 17 December 2017
parapsychologists (Bill Murray, Dan Aykroyd, and Harold Ramis) find themselves out of work due to budget constraints. They ban together to form a company that to perform a badly needed service. They become ghost busters. We follow them from their humble beginnings to their meteoric rise to new heights.

On the way we see what may be a blooming love story staring a possessed Sigourney Weaver (of "Alien" 1979 fame). There is also a token appearance by the Staypuff man. And who is the key master.

Lost of fun classic that was a first of its kind. There have been many stories similar but this combination of characters and actors is unique.

Even today you hear "Who ya gonna call?"

For those more interested in dabbling with technology than watching the film, there is BD-Live requiring "Profile 2.0" capable Blu-ray. "Cinechat" You do not use cell phones in school zones so why "Cinechat" during the film? "Slimer Mode" which gives some insight to what the film is trying to portray (this does not take the place of the commentary.) "Blu-Wizard" if you only want to see Sigourney breathing heavily. There are also a dozen or so more added features.

ellison
5.0 out of 5 stars Who Ya Gonna Call?
Reviewed in Australia on 31 December 2017
When there is an uptick in paranormal behavior in NYC a group of guys go out and capture the renegade ghosts. The EPA questions the safety of the containment unit. Oh, and there is a girl that one of the guys likes. Good music, fun.
Read more
Helpful
Comment Report abuse
See all reviews

Enterprise NCC 1701
1.0 out of 5 stars Poor Quality 4K UHD
Reviewed in the United Kingdom on 18 June 2019
Verified Purchase
This film originally released in 1984 and still is regarded as the most successful comedy ever made.

Ghostbusters is a thoroughly entertaining movie which has delighted millions around the world.

This having been said I regretfully have to report the quality of Ghostbusters 4k UHD is extremely disappointing to say the least, what I witnessed via a Panasonic UB900 4K Blu-ray player and a Epsom projector has left me in no doubt that those responsible for the release of this movie on the Premium format have really not done this film Justice.

This film comes with heavy dose of Grain in dark scenes and the shadow line detail is less than acceptable throughout the entire film with dark, black, brown and sepia tones which suffered quite badly.

The overall quality is uneven from scene to scene this entire movie requires a full remaster and some of the special effects can be updated and improved.

I really had expected better from Sony Entertainment, I have been left somewhat disappointed by the graininess of the picture quality and the uneven quality of some scenes throughout the entire movie.

I believe in quality products and this 4K release from Sony Entertainment is certainly not one of them, if Studios continue to release poor quality 4K products then they would have already condemned 4K UHD Blu-ray to history...

Just as the American market put the nails into the 3D coffin of that format which has led to the decline of 3D content in the United States...but that is another story.

I've bought recently Ridley Scott's 1979 classic Alien on 4k UHD, a film that was released 5 years before Ghostbusters and yet 20th Century Fox has produced a stunning product to be enjoyed on this premium disk format and yet Sony Entertainment has not seen the light to produce what could have been a supreme product on 4K UHD disc, a huge disappointment and the worse 4K product I have encountered so far.

Note to Sony Entertainment...
Please do something about this.
Read more
8 people found this helpful
Report abuse

Dark Lady
5.0 out of 5 stars A gorgeous Steel Book, be it only Blu Ray
Reviewed in the United Kingdom on 12 October 2018
Verified Purchase
Ghostbusters is one of my favourite films of the 1980's.
Its fun, has a cast who have chemistry including Bill Murray, Dan Akroyd, and Harold Ramis.

The plot centres around a group of scientists who chase ghosts and want to contain them, during a period of ghost activity in New York.

Its very funny, special effects are good, and has moments I think when you feel for the main characters.

Presented here in a Blu Ray steel book, at the cost is an absolute bargain and something to keep on my shelf to show my kids when they are old enough.

Images included of back cover, and contents of inside. Simply lovely :)
Read more

Nicky Jenkin - njenkin
5.0 out of 5 stars A wonderful movie which never gets old. A Classic!
Reviewed in the United Kingdom on 11 February 2020
Verified Purchase
Some movies are just born brilliant. Perfection. Extremely hard to beat the quality of this movie with any sequel or reboot.

If you’re a movie or Blu Ray Collector, you should definitely have this on your shelf. A classic movie, full of great humour, great characters and a great story. Every actor shines very brightly in this. A rare thing. Highly highly recommended!
Read more
Report abuse

RogShop
4.0 out of 5 stars AN IMPROVEMENT OVER PREVIOUS BLU RAY RELEASES - BUT STILL NOT PERFECT
Reviewed in the United Kingdom on 28 October 2016
Verified Purchase
This mastered for 4K blu ray is definately a step up from the standard blu ray, far less grain and the colour extentsion is good when viewed on our 78" Sony 4K TV, however there is still a healthy amount of filmic grain and the picture could be a tad sharper, but that being said it is a filmfrom the early 1980's so there is a dramatic improvement (though when one views older movies on blu ray, such as "Ten Commandments, Hello Dolly & Goonies, one wonders why they are so much better than this, Sound is good in DTS Master 5.1
Read more
One person found this helpful
Report abuse

jon
5.0 out of 5 stars Original and still the best
Reviewed in the United Kingdom on 23 July 2017
Verified Purchase
Great film, very funny, why they had to remake it with women I will never know.
Why not make Ghostbusters 3 rather than a remake.
I don't say reboot, reboot is what you do to a computer.
Read more
2 people found this helpful
Report abuse
See all reviews
Get FREE delivery with Amazon Prime
Prime members enjoy FREE Delivery and exclusive access to movies, TV shows, music, Kindle e-books, Twitch Prime, and more.
> Get Started
Back to top
Get to Know Us
Make Money with Us
Let Us Help You
And don't forget:
© 1996-2020, Amazon.com, Inc. or its affiliates