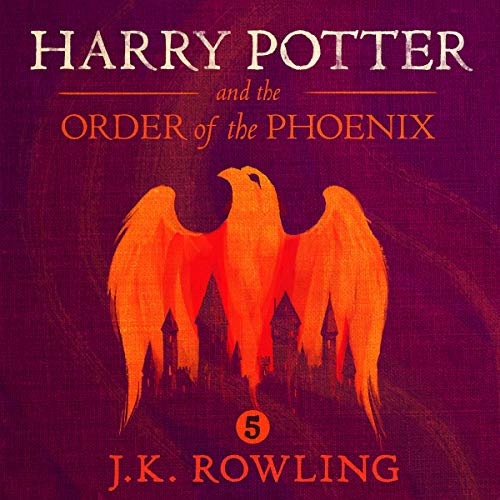 Harry Potter and the Order of the Phoenix, Book 5

4.8 out of 5 stars
4.8 out of 5
19,588 global ratings
How are ratings calculated?
To calculate the overall star rating and percentage breakdown by star, we don’t use a simple average. Instead, our system considers things like how recent a review is and if the reviewer bought the item on Amazon. It also analyses reviews to verify trustworthiness.

Finn Allen
5.0 out of 5 stars Hallelujah!!!
Reviewed in Australia on 26 October 2020
Verified Purchase
This book is worth every person in the worlds lives, it's just that good! It has a very understandable storyline and a great one at that.

This book only took 5 hours and 43 minutes to read and this book was worth every second of my life that it used.

I reckon that everybody should read this book because it is extremely interesting.
Read more
One person found this helpful
Helpful
Report abuse

Alina
5.0 out of 5 stars SO AMAZING I HAVE NEVER READ ANYTHING LIKE IT!!!!!!!
Reviewed in Australia on 28 December 2019
Verified Purchase
Being an only child I always get quiet bored with nothing to do and thats why I am considered bookworm I have read so many books I have lost count but the series that I will always remember are J.K Rowling's magical,inspiring and phenomenal Harry Potter. A friend I can carry around in my backpack
Read more
One person found this helpful
Helpful
Report abuse

Jenny B from Echuca
5.0 out of 5 stars I love this series....
Reviewed in Australia on 7 October 2018
Verified Purchase
JK Rowling is a very talented author, and deserves high praise for this series of novels. Highly recommended for all ages even like me on the wrong side of fifty. You won’t be sorry!
Read more
One person found this helpful
Helpful
Report abuse

Mal
5.0 out of 5 stars Best One Yet
Reviewed in Australia on 6 July 2020
Verified Purchase
this book is the best one yet in my opinion. It has compelling characters and story with great action set pieces and a emotional rollercoaster.
Read more
Helpful
Report abuse

Alexa KT
5.0 out of 5 stars Brilliant, as always.
Reviewed in Australia on 30 March 2017
Verified Purchase
Devoured it just as quickly as I did when it first came out when I was much littler! As always fabulous reading for anyone of all ages.
Read more
2 people found this helpful
Helpful
Report abuse

Amazon Customer
5.0 out of 5 stars Best Book Ever
Reviewed in Australia on 6 November 2017
Verified Purchase
I have always loved harry potter. I think that this is my favorite book in the series and i will always read it over and over again. Thankyhou J.K.Rowling for making me enjoy reading.
Read more
One person found this helpful
Helpful
Report abuse

doug
5.0 out of 5 stars I LOVE IT
Reviewed in Australia on 23 October 2018
Verified Purchase
5 star
The book has me on the edge of my seat the hole time
When someone dies jk puts so much energy into it and it feels like your there
Read more
One person found this helpful
Helpful
Report abuse

John M
3.0 out of 5 stars The series moves foward albeit rather slowly as Harry becomes an angst-ridden teenager
Reviewed in the United Kingdom on 28 September 2018
Verified Purchase
Well, I think any reviewer daring to criticise a Harry Potter story is on a hiding to nothing, but honestly this one was a bit of a struggle. The first three books are relatively fast moving and suit a young audience, and obviously much shorter. Number 4, The Goblet of Fire, is over 600 pages, and was too much of a challenge for my 9 year old boy who lost interest halfway through. I am determined to finish the series, having come this far, and managed to plow through all 800 pages here.
The story in this episode is rather slow developing, and frankly the editor must have been asleep on the job. There are numerous scenes that could have been removed and offer little to advance the story. It was really quite repetitive in places, and there are some many scenes that I felt I'd read before in other episodes. In this book Harry becomes an angst-ridden and often angry teenager whilst Hermione and Ron offer some stability, and Snape shows his usual over the top nastiness.
Although the plotting of the Prisoner of Azkhaban (Vol. 3) was well done and quite clever, I thought the Goblet of Fire was a little creaky in this regard, but here it becomes almost silly. There is no credible explanation why The Ministry turn against Dumbledore so spectacularly and the actions of Dolores Umbridge seem unbelievable. Also the sinister Death Eaters seem comically inept in the climatic scenes. The later books seem to me that the series isn't well mapped out and we are introduced to some characters and details that had no mention in previous books.
However, I guess I shouldn't lose sight of the fact that this is basically a series for children who won't over analyse the plotting. But then at 800 pages of text that is sometimes slow moving and repetitive, maybe JKR shouldn't either!
This is my least favourite in the series so far; Prisoner of Azkhaban is the one I most enjoyed.
Read more
33 people found this helpful
Report abuse

BusyG
1.0 out of 5 stars Beware different narrator - US version
Reviewed in the United Kingdom on 30 April 2018
Verified Purchase
I searched for audio version narrated by Stephen Fry and it took me to audible edition. I changed it to audio CD and placed order. When it came it is the US version narrated by Jim Dale. If you zoom in on pic it does say this in blurry writing at bottom of cover but nowhere in the written description did it tell me by changing format the narrator had changed. Jim Dale may be fine but we've been listening to Fry so have ordered his version from elsewhere as no idea which you get through third parties on Amazon. In fairness returns are easy with Amazon.
Read more
26 people found this helpful
Report abuse

Amazon Customer
5.0 out of 5 stars Mindblowing........speechless
Reviewed in India on 16 June 2018
Verified Purchase
I don't think there's any need for review.......
After all its Harry Potter we are talking about.......the name is enough trustworthy....
Read more

Pev
5.0 out of 5 stars Relationships, Loss and Witchcraft
Reviewed in the United Kingdom on 31 January 2018
Verified Purchase
I am 78 but I read all the Potter books and love the characters. I had to keep up with the grandchildren, so thank you JK Rowling for writing such an interesting series. I love the imagination and inventiveness involved in these stories. They are all page-turners, and I couldn't wait to read the next story in the series.... This one is a little bit sad, but so much happens that I cant wait to see what happens in the next book...
JK Rowling must go down as one of our best story writers for children. The books are a large chunk of a young boys life, peppered with witchcraft, and the skills necessary to fight the dark side. Hermione and Ron, Harry's friends are an essential part of the stories. The relationship between the 3 is absorbing and intriguing. Its as much about relationships as it is about witchcraft!
Read more
23 people found this helpful
Report abuse

Sonali
5.0 out of 5 stars Excellent
Reviewed in India on 26 April 2018
Verified Purchase
Every HP fan must have it . I am in live with these UK covers 😍😍😎 . Received it in excellent condition .
Read more

5.0 out of 5 stars Excellent
Reviewed in India on 26 April 2018
Every HP fan must have it . I am in live with these UK covers 😍😍😎 . Received it in excellent condition .
Images in this review

53 people found this helpful
Report abuse
See all reviews
Back to top
Get to Know Us
Make Money with Us
Let Us Help You
And don't forget:
© 1996-2021, Amazon.com, Inc. or its affiliates