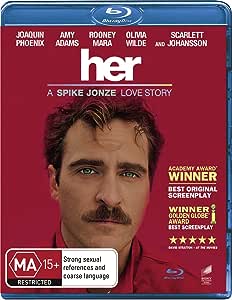 Spike Jonze directs this award-winning drama following Theodore Twombly (Joaquin Phoenix), a lonely writer who falls in love with a sentient operating system. Newly separated from his wife Catherine (Rooney Mara), Theodore works for a company that composes love letters for those who lack the creativity to pen their own. Growing more and more isolated from the outside world, his curiosity is piqued by a campaign advertising the latest artificially intelligent operating system. When he is first introduced to his new technological assistant Samantha (voice of Scarlett Johansson) he is surprised by her ever-growing emotionality and fresh way of looking at the world. As time passes, Theodore finds himself connecting with Samantha in ways he could never have imagined... The film was nominated for five Academy Awards and won for Best Original Screenplay (Jonze), for which it also received the Golden Globe.

4.5 out of 5 stars
4.5 out of 5
1,019 global ratings
How are ratings calculated?
To calculate the overall star rating and percentage breakdown by star, we don’t use a simple average. Instead, our system considers things like how recent a review is and if the reviewer bought the item on Amazon. It also analyses reviews to verify trustworthiness.

Budge
3.0 out of 5 stars A thought provoking script for people who don't go out so much.
Reviewed in the United Kingdom on 31 October 2019
Verified Purchase
This was so brilliant an idea, i mean we all have relationships with inanimate objects. Haven't you ever found yourself talking to your car like it could understand or shouting "Why do you do this to me" at some faulty device. We're humanising things more and more as this computer age is stealing away our normal face to face socialising. Falling in love with your day planner is about possible given the right events, the right man and of course the right day planer.
That's where it doesn't quiet sit for me, its as if she's trying to hard that and then there's the length of the thing but it's still a great movie. Joaquin Phoenix emits just the right amount of calmness and the AI voice just the right amount of sexyness though as time goes on some of the things she comes out with is over the top. A thought provoking script but she just doesn't have the legs for two hours worth.

Harry
1.0 out of 5 stars Unbeleivable
Reviewed in the United Kingdom on 29 March 2019
Verified Purchase
I cannot believe the other reviews are talking about the same film. It is certainly not a chic flic! It reminded me of a book "Portnoy's Complaint": the subject matter is the same. There were times when I laughed out loud at the way the OS talked to her owner: I would hope AI would have more self-respect. I cannot understand why anyone would put resources into this script, or how the AI voice actror said her lines without laughing. I kept waiting for a punchline, a twist, but no. 2 hours of my life gone. I warn all grown-ups against this film.
Read more
7 people found this helpful
Report abuse

Someone
1.0 out of 5 stars I want my money back please
Reviewed in the United Kingdom on 9 February 2020
Verified Purchase
I bought this because I am very interested in AI and watch anything to do with AI. This was painful to watch. I gave up half way. The sexual scenes were totally unnecessary and unreal. I had to turn the volume down in case my neighbours could hear it. Boring all the way through. It was like it was written while doing the washing up and the laundry.
Samantha (The AI character) was intolerably false, in the sense that in reality that would not work or behave that way. This is purely made for modern women. The makers did not understand AI at all and just used a typical shallow feminine character with AI as a theme. The character had not purpose or balance either. For example why on earth does a program have a boyfriend? Why does who try to torture him emotionally? The whole point of creating AI is to remove the prehistoric shallow mentality of the women. It is like buying a realistic doll and program it to get pregnant, moody, have periods and cheat on you. Also Samantha was as lovable as a toilet brush. This film just emphasised the evil nature of women done something like that with this film.
Will not watch it again if I was maroons in space for the rest of my life.

Good
- The flow of interaction with AI system was very good, realistic, believable and seamless.
- The science was realistic, in proportion and not exaggerated.

Musical Anorak
5.0 out of 5 stars An Unusual, But Very Profound & Enjoyable Film
Reviewed in the United Kingdom on 8 May 2016
Verified Purchase
On paper, this film's storyline sounds dull, boring and a film I would normally avoid. I really did enjoy it, much to my surprise. The chemistry between Joaquin Phoenix and Scarlett Johansson develops very naturally throughout the film into a very believable relationship; even though Johansson doesn't actually appear on screen. An unusual but very profound and enjoyable film.
Read more
6 people found this helpful
Report abuse