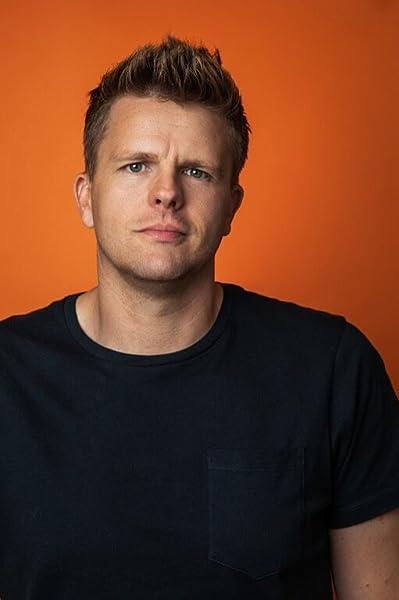 High Performance: Lessons from the Best on Becoming Your Best Paperback – 30 November 2021

by Jake Humphrey (Author), Damian Hughes (Author)
4.7 out of 5 stars 40 ratings
See all formats and editions
Sorry, there was a problem loading this page. Try again.

How high achievers unlocked their potential. And how you can too.

How do Olympic medal-winning athletes turbo-charge their motivation? How do multi-millionaire founders develop the habits of champions? And how do Premier League football coaches lead their teams to victory?

High Performance reveals the methods the world's most remarkable athletes, coaches and entrepreneurs use to excel.

From taking responsibility for your situation to finding your 'trademark behaviours', thinking flexibly to crafting a high performance culture, Jake Humphrey and Professor Damian Hughes identify the eight crucial steps to becoming the best 'you' possible.

Along the way, they draw on cutting-edge research to explain why these methods work - and how we can all use them. Anyone can learn the secrets of high performance.

High Performance will help you think clearly, act decisively and keep calm under pressure. If you want to stop making excuses and take responsibility for your life, I recommend you read this book. -- ANT MIDDLETON

This book captures so many different lessons from so many remarkable people. It will help every reader apply these insights to their own lives - so they can become high performers themselves. -- ADAM PEATY

High Performance will help you recognise your inner strength and celebrate your achievements. It's inspiring, exciting and massively motivating. -- FEARNE COTTON

This amazing book will teach you the mindset and habits of champions. High Performance has already impacted some of the best players and coaches across the world, but Jake and Damian's insights are equally valuable to people from any walk of life. I urge you to open this book and open your mind to the lessons within. -- FRANK LAMPARD

A fantastic book that will help you think like an Olympic champion - in mind, body and spirit. -- DAME KELLY HOLMES

Teamwork won us the Rugby World Cup, and teamwork can transform your life. In this brilliant book Jake and Damian get to the heart of defining, creating, and inspiring the team around you, so you too can achieve high performance. -- SIR CLIVE WOODWARD

Jake Humphrey is the lead Premier League football presenter on BT Sport. He formerly spent a decade at the BBC, where he covered the likes of Formula 1, the FIFA World Cup and the London Olympics. Damian Hughes is an expert on sporting culture and a visiting professor at Manchester Metropolitan University. In their multi-million-download High Performance Podcast, Jake and Damian interview remarkable individuals - from Siya Kolisi, to Matthew McConaughey, to Ole Gunnar Solskj r - to uncover the secrets of high performance.
Start reading High Performance on your Kindle in under a minute.

An experienced and knowledgeable Television and Radio broadcaster, Jake is currently the face of Premier League Football on BT Sport having been at the forefront of much of BBC Sport’s coverage for many national and international events. He is also one of the Co-Founders of award-winning production company Whisper.

Jake joined CBBC in 2001 and had success hosting Fame Academy’s daily live show and CBBC Comic Relief Does Fame Academy coverage during Red Nose Week in March 2003, 2005 and 2007. He also presented ‘Gimme A Break’, ‘Newsround’ and ‘Beat the Pack’ as well as the BAFTA nominated ‘Rule the School’ and ‘Bamzooki’. By 2005 he was hosting ‘Sportsround’, covering major international sporting events such as the 2006 Commonwealth Games in Melbourne, the World Cup from Germany and the Cricket World Cup from Antigua in 2007. Jake also presented ‘Football Focus’ in 2006, and went on to host ‘Score’, ‘Final Score’ and ‘Match of the Day’ from Austria and Switzerland for BBC1, BBC3 and BBCi. In 2009, he began presenting live Championship Football coverage on BBC’s ‘Match of the Day’, before going on to join the BBC1 and BBC2 anchor team for the Delhi Commonwealth Games in 2010. In 2012, he broadcast at the European Championships, hosted Summer Olympics coverage for BBC One and BBC Three, as well as anchoring the BBC’s award-winning Formula One coverage. That year, he also had his first book - The Inside Track published by Simon &amp; Schuster in 2012.

Jake joined BT Sport at the start of the 2013/2014 as the face of BT Sports Premier League coverage, fronting their marquee Premier League fixtures. In 2020, he launched the hugely successful High-Performance podcast with author professor Damian Hughes, offering an intimate glimpse into the lives of high-achieving, successful individuals.

Off screen, Jake is passionate about contributing to the community through charity work. He

is Trustee of Norwich Community Sports Foundation and Vice President of Clic Sargent. In

2020, Jake was approved by the Queen to be a Deputy Lieutenant of Norfolk.

4.7 out of 5 stars
4.7 out of 5
40 global ratings
How are ratings calculated?
To calculate the overall star rating and percentage breakdown by star, we don’t use a simple average. Instead, our system considers things like how recent a review is and if the reviewer bought the item on Amazon. It also analyses reviews to verify trustworthiness.

J. Bourne
5.0 out of 5 stars Best book I've read in 10 years
Reviewed in the United Kingdom on 18 December 2021
Verified Purchase
As someone who reads about 50-60 books a year, mostly on success, autobiographies, psychology, business and mindset (I'm boring, an accountant, a CFO actually with 50 investment properties so think it's working). Being too much of a geek to be in to sports so hadn't ever heard of Jake Humphrey and wasn't interested in the book until seeing Adam Peaty had a testimonial on the cover. As a former swimmer he is someone I do respect.

From the first chapter it has been surprising how good the book actually is and how much content is in the book, all nice and clear, and it's not just repetition of what you can find elsewhere. Perhaps some is, but you'd need to read about 50 great books to get what is nicely distilled in this one amazing volume.

The audiobook is particularly great, like listening to a conversation. It's easier to remain engaged if you listen while running or washing up.
Read more
15 people found this helpful
Report abuse

asbm
5.0 out of 5 stars This book is high performance itself
Reviewed in the United Kingdom on 20 December 2021
Verified Purchase
I’m a 15 year old girl and have listened to most of the HP podcasts. Damian and Jake have accompanied me through long runs in the cold, painful sessions in the gym, and endless car journeys. I was so excited to see the book come out as I knew I would love it, and I really have loved it. I was captivated from the start all the messages I have taken from the book I am sure I will use for the rest of my life.

As Jake said, ‘To unlock your potential, you don’t need to be a born leader. You just need to be ready to try, fail, and try again,’

Thank you Damian and Jake for helping me find ways to live a high performance life. All your work and efforts are so appreciated 😁
Read more
13 people found this helpful
Report abuse

joseph mc brearty
5.0 out of 5 stars Book of the year
Reviewed in the United Kingdom on 18 December 2021
Verified Purchase
Been a Gaelic football coach and always looking to improve to better my players. Leading on from their podcast.
This book is simply a must have not just for aspiring coaches etc. Its got everything you'll need to improve ur coaching and how u treat life etc. You'll only improve how you approach life too after reading this book. To the authors simply thank you for putting time to producing this gold mine of a book. I cant recommend this enough, You want to improve just buy this...
Read more

5.0 out of 5 stars Book of the year
Reviewed in the United Kingdom on 18 December 2021
Been a Gaelic football coach and always looking to improve to better my players. Leading on from their podcast.
This book is simply a must have not just for aspiring coaches etc. Its got everything you'll need to improve ur coaching and how u treat life etc. You'll only improve how you approach life too after reading this book. To the authors simply thank you for putting time to producing this gold mine of a book. I cant recommend this enough, You want to improve just buy this...

Carl Bradford
5.0 out of 5 stars Great Read - A must to reach your full potential!
Reviewed in the United Kingdom on 10 December 2021
Verified Purchase
As an avid listener to the podcast on my weekly commute to work, I would often hear some great words of wisdom but unable to make notes as I was driving. This book has done that all for me in a neat, logical way! A great read, easy to follow with awesome, easy to follow hints and tips to hit high performance.
Read more
8 people found this helpful
Report abuse

Kindle Customer
1.0 out of 5 stars Great start, went downhill rapidly
Reviewed in the United Kingdom on 6 January 2022
Verified Purchase
I really enjoyed this book at first, and highlighted many important lessons and constructive ideas I could implement. Around 30% in, the book basically became waffle about sports and athletes and mostly irrelevant information. Examples should be boiled down to the essential features. I don't care about football, their upbringing, anything. From 30% onwards, the book could have been a bullet point blog post about entirely obvious high performance habits. I'm annoyed I spent so much money on a book that was basically a transcript of interviewing people in sports, with 15 pages of pointless information just to say 'be consistent'.
Read more
3 people found this helpful
Report abuse
See all reviews
Back to top
Get to Know Us
Make Money with Us
Let Us Help You
And don't forget:
© 1996-2022, Amazon.com, Inc. or its affiliates