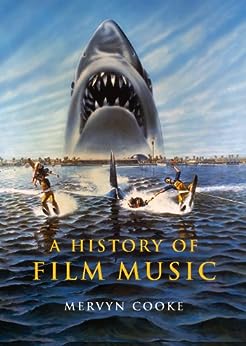 by Mervyn Cooke (Author) Format: Kindle Edition
See all formats and editions
Sorry, there was a problem loading this page. Try again.
Read more Read less
Previous page
Next page
Due to its large file size, this book may take longer to download

'Written in a clean, clear prose shot through with a lightly-worn, concisely-argued scholarship, this is a considerable achievement and an essential read for anyone interested in this vital and still developing genre.' Classical Music Magazine

'Mervyn Cooke hasn't written merely 'a' history of film music - when all the reckoning is done, this will surely be 'the' history of film music written for cinema, from 1920s silent films to the latest Hollywood blockbusters. Writing about a medium that, as Aaron Copland once cogently put it, is designed to be felt rather than explicitly heard is an exacting task, and one that leaves many floundering. But Cooke's background writing about opera and jazz puts his brain in the right place for considering an art form that aims to balance artifice and spontaneity. … An authoritative read, written with the cracking pace of a Bond thriller.' Classic FM

'Cooke writes accessibly yet with as much intellectual rigor on the propagandistic songs of Shostakovich as on MTV's impact on Flashdance. … Crammed with source acknowledgement for further reading, this is nothing short of essential reading for anyone with an interest in film.' BBC Music Magazine

'Cooke has written a book useful to readers with or without musical background … they [readers] will appreciate a historical study that incorporates music and film studies and keeps the film music, not the films, its focus.' Choice

'The real charm of Mervyn Cooke's A History of Film Music … is the sheer breadth of coverage and the passion with which this coverage is conveyed. Never before has a work attempted such a wide-ranging, vivid, and well-documented sweep of film music and, for this reason among many others, it is a work thoroughly to be recommended.' Music and Letters

'Cooke arranges his book thematically rather than chronologically, and gives substantial attention to the work of important film music composers such as Max Steiner, Alfred Newman, Hanns Eisler, Georges Auric, and Ennio Morricone.' Larry M. Timm, Journal of the Society for American Music

'The world of film music will rejoice at being the subject of Mervyn Cooke's new book. It is both scholarly and highly accessible - a must have for anyone interested in this increasingly popular topic.' George Fenton, film composer

'If you can only buy one film music book, make it this one … This is perhaps one of the most clear and cogently conceived overviews of music that one is likely to see … one is struck by the fine choices Cooke makes to illustrate his point, whether he is discussing a Virgil Thomson score, or why a Scott Bradley animated short score works best. … With no room for subsequent updates or supplements, this may very well be 'the' film music book for some time to come. … this is a book that every lover of film music should have on their shelves. It is a book not so much to be read but to be savoured and enjoyed.' Film Music Review

'… this is a wonderful and important book, and its comprehensive, encyclopedic scope makes it a valuable resource especially for upper-level courses beyond the general education curriculum.' Blake Howe, Journal of Music History Pedagogy --This text refers to the hardcover edition.

From silent cinema to the modern Hollywood blockbuster - a lively and international perspective on the history of film music. --This text refers to the hardcover edition.

From silent cinema to the modern Hollywood blockbuster, this volume provides a comprehensive and engaging overview of the major trends in the history of film music. The first study of film scoring to present a genuinely international perspective, it is ideal for both students and film enthusiasts alike. --This text refers to the hardcover edition.

Mervyn Cooke is Professor of Music at the University of Nottingham. --This text refers to the hardcover edition.
Read more

4.4 out of 5 stars
4.4 out of 5
45 global ratings
How are ratings calculated?
To calculate the overall star rating and percentage breakdown by star, we don’t use a simple average. Instead, our system considers things like how recent a review is and if the reviewer bought the item on Amazon. It also analyses reviews to verify trustworthiness.

Buckingham bookworm
5.0 out of 5 stars Know more about it
Reviewed in the United Kingdom on 26 November 2013
Verified Purchase
Having enjoyed a week of film music during a specially featured week on BBC radio and TV, I decided I wanted to know more about it. Together with this book and I tunes I have developed a new enthusiasm. The book is highly readable and divided into chapters that enable one to read about various aspects without going from start to finish. It sits on my coffee table and I regularly dip in for more information. There is a lot to discover and this informative and entertaining has opened the doors to, for me, a new and rewarding aspect of music.
Read more
3 people found this helpful
Report abuse

Andy94
5.0 out of 5 stars Excellent book for students and readable for leisure too.
Reviewed in the United Kingdom on 6 February 2015
Verified Purchase
Got this book as part of my course and it is really useful! It covers MOST aspects of WESTERN culture with a side reserved for India snd Japan but otherwise a very coherent account of film music. Though a background knowledge in the theory of both film and music studies (though not essential) is recommended in order to get a better grasp of it.
Read more
One person found this helpful
Report abuse

Catherine Lodwick
5.0 out of 5 stars Love film music this is for you
Reviewed in the United Kingdom on 27 February 2017
Verified Purchase
If your a musician and are into film soundtracks, and want to find out about early music, and how it has evolved within the film industry, then this book is for you. It spans from early silent films in the 1800s to modern times. Highly recommended.
Read more
One person found this helpful
Report abuse

Loobyloo
5.0 out of 5 stars Five Stars
Reviewed in the United Kingdom on 26 November 2016
Verified Purchase
Essential reading for my MA!!
Read more
Report abuse
See all reviews
Back to top
Get to Know Us
Make Money with Us
Let Us Help You
And don't forget:
© 1996-2021, Amazon.com, Inc. or its affiliates