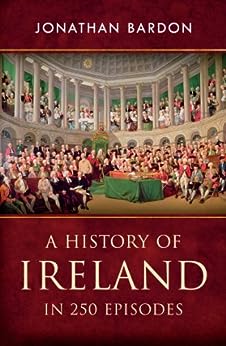 A History of Ireland in 250 Episodes – Everything You’ve Ever Wanted to Know About Irish History: Fascinating Snippets of Irish History from the Ice Age to the Peace Process Kindle Edition

by Jonathan Bardon (Author) Format: Kindle Edition
See all formats and editions
Sorry, there was a problem loading this page. Try again.

THE ONLY BOOK ON IRISH HISTORY YOU’LL EVER NEED!

From invasions to rebellions, heroic martyrs to pragmatic politicians, industrial development to mass emigration, A History of Ireland in 250 Episodes by renowned Irish historian Jonathan Bardon will take you on a sweeping journey through Irish history, getting behind the historical headlines to reveal the lived experience of Irish people.

Written in easy-to-read bitesize episodes, Bardon’s original and engaging style will make you feel as though you’re alongside William Smith O’Brien and his rebels at the Battle of Widow McCormack’s Cabbage Patch, traversing the country to banish snakes and convert Celts with St Patrick, and feasting with the Spanish Armada’s Captain Francisco de Cuellar and his wild Irish hosts. From taking up arms with the United Irishmen at Vinegar Hill to standing in solidarity with the workers of the Dublin 1916 Lockout, A History of Ireland in 250 Episodes will take you right to the heart of Irish history.

Featuring a cast of characters that leap off the page, from the well-known, like the hero of the War of Independence, Michael Collins, to the quirky, such as Susannah Cibber, the first soprano to sing Handel’s Messiah, A History of 250 Episodes will thrill, excite and inform you from start to finish. Whether you dip in and out of episodes or devour it from cover to cover, Bardon’s must-have book will teach you everything you’ve ever wanted to know about Irish history and much, much more beyond.

Jonathan Bardon was born and educated in Dublin, but has spent most of his life as a teacher and lecturer in Belfast. He has an outstanding reputation as a narrative historian of rare ability. His History of Ulster is a modern classic. --This text refers to the paperback edition.

4.5 out of 5 stars
4.5 out of 5
382 global ratings
How are ratings calculated?
To calculate the overall star rating and percentage breakdown by star, we don’t use a simple average. Instead, our system considers things like how recent a review is and if the reviewer bought the item on Amazon. It also analyses reviews to verify trustworthiness.

Dean Hyland
4.0 out of 5 stars A must 'pre-read' before touring Ireland
Reviewed in Australia on 19 October 2014
Verified Purchase
A History of Ireland in 250 Episodes was a truly enjoyable read both before our trip and again afterwards. The pre-trip reading helped set the scene and helped expand upon the facts received during the trip. The post-trip read helped to complete the pieces of the jigsaw missed and certainly helped to reinforce the wonderful experience and history of Ireland. An easy read which is clear and concise, I would highly recommend the book to anyone travelling to Ireland or wanting to expand their knowledge on the history of this beautiful country.
Read more
Helpful
Report abuse

Anon
5.0 out of 5 stars Brilliant!
Reviewed in the United Kingdom on 31 August 2019
Verified Purchase
I haven't quite finished this book but can tell you it's brilliant. Fantastic detail but never boring. Even includes some first-person accounts of historical events from centuries ago which really bring them alive. If anyone thinks the current 'Border' issue only started recently, read this book and you'll rethink everything you ever thought about Ireland as well as everything you ever thought about Ireland and its relationship with England. It's a wonder they don't stop every English person at their sea ports and airports and refuse to let us in! It's very grim in places but I'm so glad I found this book. The bite-sized 'chapters' or episodes, which are so thoroughly researched and so well written and accessible, make it very readable and I've learnt so much. Outstanding and well worth reading.
Read more
19 people found this helpful
Report abuse

Graham McDowell
5.0 out of 5 stars Best non politicised version of irish history
Reviewed in the United Kingdom on 4 February 2018
Verified Purchase
I wanted to gain an understanding of the political evolution of Ireland and the forces that drove that turmoil through the years without having a nationalistic or unionist agenda under scoring the story. It gave good insights into how a population of Presbyterians and Catholics saw themselves as Irish and strove to establish a political mandate before politics in England unleashed forces that torn them apart and have maintained those divisions to this day. Many uncomfortable truths in this book for our main societal groups.
Read more
20 people found this helpful
Report abuse

Woldis Benolam
5.0 out of 5 stars This is a wonderful book covering a vast amount of time and providing ...
Reviewed in the United Kingdom on 10 September 2015
Verified Purchase
This is a wonderful book covering a vast amount of time and providing loads of information. The origin of the book as a 250 programme series of 5 minute talks on BBC Northern Ireland makes each chapter brief and to the point and easily read. My only reservation about it is that Mr Bardon seems to have a leaning towards "the native Irish" whoever they may have been - the Hiberni I presume -though he does indicate that the Celts probably came from Central Europe, ancient migrants indeed. Also, at the end he seems to indicate that the trouble in Ulster is religious conflict. This reinforces the frequent media mistake of describing it in the terms of Catholic versus Protestant, when it has equally been about two different political viewpoints, as well as about land. Anyone reading this book will be greatly enriched by the experience and undoubtedly will be better informed.
Read more
21 people found this helpful
Report abuse

JMAC
5.0 out of 5 stars Epic history of Ireland
Reviewed in the United Kingdom on 22 September 2021
Verified Purchase
As a Northern Irish Protestant, this book has been a relevation since I was not taught any Irish history at school. Bardon is an excellent narrative historian and this book never had a dull moment. Gripping stories. I feel I know myself better and where I fit into my country. This book is brilliant - read it.
Read more
One person found this helpful
Report abuse

J D.
5.0 out of 5 stars Great overview of why Ireland is Ireland
Reviewed in the United Kingdom on 7 May 2020
Verified Purchase
Very interesting insight into why Ireland is Ireland. Growing up in the 70’s I never understood why there was an Ireland and a Northern Ireland, and why all the troubles were happening. This book gives a clear picture of the major events that made Ireland what it is today and makes me want to delve deeper into the historical events that this book touches.
Read more
2 people found this helpful
Report abuse
See all reviews
Report an issue
Does this item contain inappropriate content?
Report
Do you believe that this item violates a copyright?
Report
Does this item contain quality or formatting issues?
Report