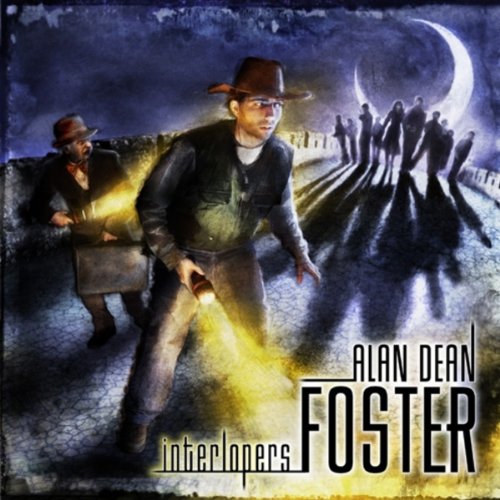 Alan Dean Foster (Author), Ben Browder (Narrator), Buzzy Multimedia Publishing Corp. (Publisher) & 0 more
4.3 out of 5 stars 9 ratings
See all formats and editions
Sorry, there was a problem loading this page. Try again.
Cody Westcott, a young archeologist, returned from a dig at Apachetarimac with more than he bargained for. Seems the Chachapoyans that he had been studying had a lot to teach us all. Soon he steps through the looking glass, but unlike Alice its no fairytale world that he finds. Instead it is our own world teeming with Interlopers: Those Who Abide. Unseen by the mass of humanity they are aware that Cody can now see them. They don't like it.

Thrust into a fight that finds him allied with highly unlikely characters he travels around the world to ancient centers of power. He calls on strength he never knew he possessed to save his wife and the future of humanity.

Read more
©2001 Alan Dean Foster (P)2002 Buzzy Multimedia
Previous page
Next page
Learn more about membership
By completing your purchase, you agree to Audible’s Conditions Of Use and Privacy Notice.
Sold and delivered by Audible, an Amazon company

4.3 out of 5 stars
4.3 out of 5
9 global ratings
How are ratings calculated?
To calculate the overall star rating and percentage breakdown by star, we don’t use a simple average. Instead, our system considers things like how recent a review is and if the reviewer bought the item on Amazon. It also analyses reviews to verify trustworthiness.

Archeologist Coschocton "Cody" Westcott discovers, along with his future wife Kelli Alwydd, discover hidden chambers below the temple they are excavating filled with all sorts of carving and symbols on the walls. They photograph all of it for later research, both making careers out of it.

Later, married and teacing in Arizona, Cody deciphers one set of symbols for some sort of formula. A chemist friend helps him mix it up and Cody samples it.

A whole new word opens up for him. And not a nice one.

He can see Those Who Abide, the Interlopers, who live in natural objects: trees, rock, and such, until a human touches them, invading the body. He witnesses a girl vomit, a man turn violent and kick his dog, two women crash their bikes together just to warn him off.

Only he can see them and does wha he can to prevent them infecting people. But he must do more.

What are they? There must be others that know of them. How can they be stopped?

Foster has a style that pulls one into the story and won't let go.
Read more
Report abuse