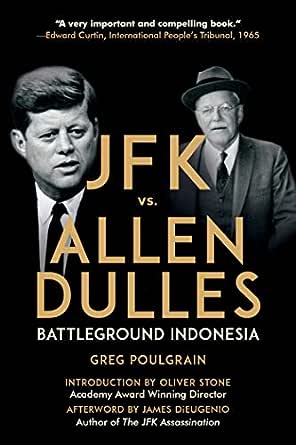 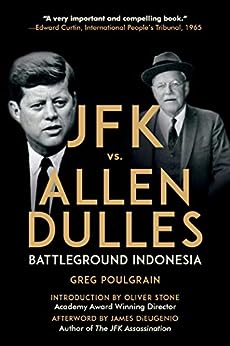 “What did Allen Dulles know that meant JFK and Sukarno both had to go? How did Sukarno's Non-Aligned Movement shake Dulles's Cold War chessboard? How was JFK about to turn it over? Greg Poulgrain blazes the way brilliantly. Follow the dark trail from the world's largest gold deposit, to the murder in Dallas, to the CIA coup and genocide in Indonesia.”
—James W. Douglass, author of JFK and the Unspeakable

"Dr. Poulgrain is to be commended for exposing definitively, at long last and despite vehement government denials, the CIA-Suharto alliance that toppled Sukarno in Indonesia, leading to the slaughter of at least half a million innocent people. The template for regime change, reused in Iraq and other conflicts, is laid bare for all to see. Poulgrain’s work fills a significant hole in our history—the importance of Indonesia on the large battlefield of interests that put Allen Dulles and John F. Kennedy on a fatal collision course."
—Lisa Pease, author of A Lie Too Big to Fail: The Real History of the Assassination of Robert F. Kennedy

"Brilliant and profoundly important, JFK vs. Allen Dulles: Battleground Indonesia, exposes the ugly truth behind the savage foreign policy secretly enacted by Allen Dulles and the CIA that resulted in the deaths of nearly a million or more Indonesians and the coup d'etat against the Sukarno government. Greg Poulgrain meticulously uncovers another reason why President John Kennedy was the arch-enemy of Dulles and the CIA and why he was assassinated. Intricate and engrossing, this is true and crucial history by an indefatigable researcher."
—Edward Curtin, independent writer and sociologist, author of Seeking Truth in a Country of Lies --This text refers to an alternate kindle_edition edition.

Greg Poulgrain is the author of three other books about Indonesia, including The Genesis of Konfrontasi—Malaysia, Brunei and Indonesia 1945-1965. He teaches Indonesian Politics, History & Society at University Sunshine Coast. He lives in Brisbane, Australia. --This text refers to an alternate kindle_edition edition.

4.5 out of 5 stars
4.5 out of 5
14 global ratings
How are ratings calculated?
To calculate the overall star rating and percentage breakdown by star, we don’t use a simple average. Instead, our system considers things like how recent a review is and if the reviewer bought the item on Amazon. It also analyses reviews to verify trustworthiness.

There are 0 customer reviews and 14 customer ratings.
Back to top
Get to Know Us
Make Money with Us
Let Us Help You
And don't forget:
© 1996-2021, Amazon.com, Inc. or its affiliates