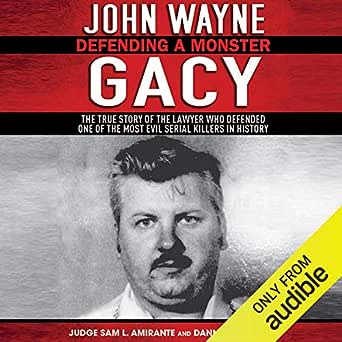 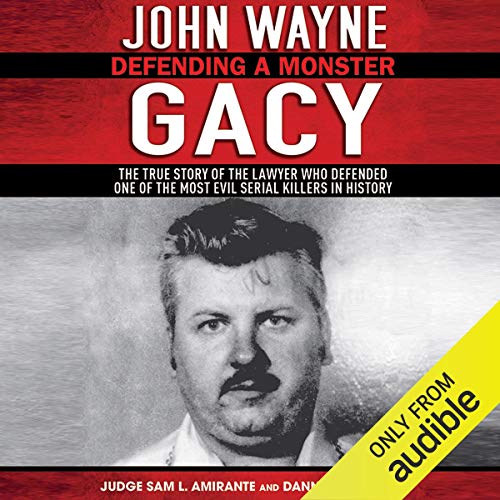 Vanessa
4.0 out of 5 stars Creepy
Reviewed in Australia on 7 November 2016
Verified Purchase
Interesting but very creepy getting into the mind of this man. To read about him from his lawyer's point of view was a different take and very interesting also. A bit gruesome and you feel for the victims and their families but definately a good read.
Read more
2 people found this helpful
Helpful
Comment Report abuse

Bartlett
TOP 1000 REVIEWER
4.0 out of 5 stars Gacy
Reviewed in Australia on 14 October 2016
Verified Purchase
This was oddly memorable. To read it from the defence attorney's view. To read how he thought Gacy truly was insane. Very interesting.
Read more
3 people found this helpful
Helpful
Comment Report abuse
See all reviews from Australia

Kindig Blog
4.0 out of 5 stars An interesting perspective on a dark story
Reviewed in the United Kingdom on 17 October 2016
Verified Purchase
The true story of the crimes and trial of John Wayne Gacy told from the perspective of his defense lawyer. Being from the UK, I didn't really know too many details about the case before reading the book and therefore I found a lot of the information intriguing and interesting. I liked how the book asks questions about what makes criminals like this tick and explains the reasons that someone would chose to (or morally be able to) defend someone in court who has admitted to killing 33 young boys.

However, there are some problems with the telling of the story. The first is that the author is very patriotic, which is fair enough, but I think there was quite a lot paragraphs dedicated to how amazing the US justicial system is which I don't think were particularly needed. The book also has an added amount of drama which it really doesn't need as it's true crime story told from the perspective of someone who was actually there - that's perfectly exciting enough. The encounters, particularly the story of Rob Piest's last few hours is embelleshed by thoughts and feelings that this author cannot possibly have known in that much detail - the only witnesses were Rob himself, who never made it out of the room alive to tell his story and Gacy. There's also a lot of irritating repetition of points and ideas which do little to add to the story.

Having said that Amirante, while rather preachy in places, still leaves enough flexibility in his writing including presenting the prosecution's case (albeit with his own commentary) for you the reader to make up your own mind. However confused or complicated it may end up being. An interesting read but by the end I felt Amirante was writing more for himself than anyone else, I just hope it helped him.

Martin Bishop
4.0 out of 5 stars A Killer, but also a victim as well.
Reviewed in the United Kingdom on 27 June 2016
Verified Purchase
The story of one of Americas most famous or infamous serial killers John Wayne Gacy.

Told by the man that had the unenviable job of trying to defend him.

He paints the man as a man with no real friends, a man that was belittled by his father who thought he was nothing but a waste of space and a failure and never tired of telling him that. A closet homosexual, so closed in that he never admitted it even to himself.

A man that picked up young men up tied them up and killed them and then buried them either under his house or simply chucked in the river.

A man that was a braggart, but also a man that raised lots of money for charity and performing for kids in his infamous clown costume.

He was many things, but although he killed 33 people did he deserve the death penalty? By any rational definition the man was clearly insane and he even admitted he blanked out many times during his crimes only coming too again when the dead body was in front of him leaving him with nothing but the grime job of disposal.

His lawyer clearly felt he was insane, and defended him on that basis but in the end you have to decide was he killed because he was an evil man or simply because after killing 33 times the call for vengeance was just too loud for everyone to ignore.

Janey
4.0 out of 5 stars A monster defended
Reviewed in the United Kingdom on 5 May 2016
Verified Purchase
This book gives an insight into The Monster that was J W Gacy.
It is interesting in the sense that it brings together the complete story from a point of law. I still find it difficult to understand how lawyers can defend these monsters when they know exactly what they have done.
The only reason I gave this 4 stars is because some of the court information is a little dragged out, however, it is definitely worth reading.
Read more
Helpful
Sending feedback...
Thank you for your feedback.
Sorry, we failed to record your vote. Please try again
Report abuse

Jim B
4.0 out of 5 stars Recommended
Reviewed in the United Kingdom on 8 November 2014
Verified Purchase
Interesting perspective on Gacy from his legal team. Pretty good on background of Gacy and his victims. Worth getting if you don't already know much about the case. Generally well written and demonstrates the ability of some offenders to hide in plain sight and just how easy it is for vulnerable victims to simply disappear from the radar. Overall a good read.
Read more
One person found this helpful
Helpful
Sending feedback...
Thank you for your feedback.
Sorry, we failed to record your vote. Please try again
Report abuse
Load more international reviews

glenis cassidy
3.0 out of 5 stars Interesting.
Reviewed in the United Kingdom on 12 March 2016
Verified Purchase
Knowing nothing about this case I was keen to learn. Ultimately began to lose interest as it was too long winded
Read more
Helpful
Sending feedback...
Thank you for your feedback.
Sorry, we failed to record your vote. Please try again
Report abuse

James MacDonald
4.0 out of 5 stars True Crime
Reviewed in the United Kingdom on 23 April 2017
Verified Purchase
Excellent story of a truly diabolical villain, how this man got away with these crimes for so long is amazing
Read more
Helpful
Sending feedback...
Thank you for your feedback.
Sorry, we failed to record your vote. Please try again
Report abuse
Load more international reviews

Mrs. Toni Hayden
5.0 out of 5 stars Five Stars
Reviewed in the United Kingdom on 24 May 2016
Verified Purchase
Very good and gave a good insight into this monster.
Read more
Helpful
Sending feedback...
Thank you for your feedback.
Sorry, we failed to record your vote. Please try again
Report abuse

Matthew William Noble
4.0 out of 5 stars Interesting read
Reviewed in the United Kingdom on 15 April 2016
Verified Purchase
Considering the terrifying nature of John Gary, you have to give the utmost respect to the people that would be willing to defend him. Such a gripping book and well worth a read
Read more
Helpful
Sending feedback...
Thank you for your feedback.
Sorry, we failed to record your vote. Please try again
Report abuse