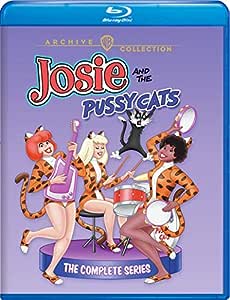 Josie & The Pussycats: The Complete Series

Josie and the Pussycats have reunited for an exclusive engagement! Their claws and fangs emerged to bust the meanest dudes without messing up their hair and makeup for their next big sold-out concert. Josie, from the legendary Archie Comics, is here to put on an unforgettable show! So put on those Saturday Pussycat pajamas, grab some cereal, call your friends and rock out to this 2-DISC COMPLETE SERIES COLLECTION!

4.7 out of 5 stars
4.7 out of 5
312 global ratings
How are ratings calculated?
To calculate the overall star rating and percentage breakdown by star, we don’t use a simple average. Instead, our system considers things like how recent a review is and if the reviewer bought the item on Amazon. It also analyses reviews to verify trustworthiness.

Raymond Rainbow
4.0 out of 5 stars Josie, Val and Melody at their most charming!
Reviewed in the United Kingdom on 27 February 2017
Verified Purchase
I've always had a soft spot for Josie and the Pussycats. The film was one rarity that got it "right." The music was much better too. Here it's just bland bubblegum pop, rather than the stuff on the highly recommended film soundtrack Cd. Dan DeCarlo (the artist & designer) was someone special, I know of no other artist who gave his characters lovable cartoon faces but with anatomically correct bodies. Speaking as a frustrated artist it's something that is not easy to do right! The discs were also a little more worn than I usually accept, but they're more or less ok.
Read more
One person found this helpful
Report abuse

piers
3.0 out of 5 stars DVD
Reviewed in the United Kingdom on 12 July 2020
Verified Purchase
It wasn't to bad except I didn't realise it was an american DVD, but fortunately my laptop is able to use american DVDs. Thanks for the service.
Read more
Report abuse

Simon
5.0 out of 5 stars Long tails and ears for hats
Reviewed in the United Kingdom on 27 April 2017
Verified Purchase
Release for this classic series, wonderful, buy it, you'll regret it if you don't. RECCOMENDED
Read more
Report abuse

Dennis the Menace
5.0 out of 5 stars Hannah and Barbara
Reviewed in the United Kingdom on 12 September 2016
Verified Purchase
Fantastic fun
And full of laughter takes me back to my childhood
Thank you for being the best shopping site for dvds
P.s thanks Peter

Read more
One person found this helpful
Report abuse
See all reviews
Get FREE delivery with Amazon Prime
Prime members enjoy FREE Delivery and exclusive access to movies, TV shows, music, Kindle e-books, Twitch Prime, and more.
> Get Started
Back to top
Get to Know Us
Make Money with Us
Let Us Help You
And don't forget:
© 1996-2020, Amazon.com, Inc. or its affiliates