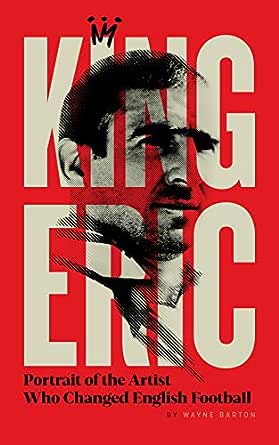 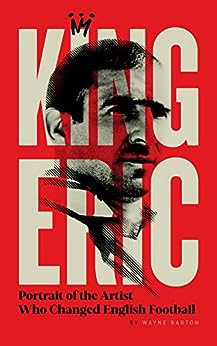 B. Greenwood
5.0 out of 5 stars Marital problems?
Reviewed in the United Kingdom on 5 April 2020
Verified Purchase
Get Wayne Barton to write a book on your other half.

It's a surefire way to rekindle the fire in your relationship.

While the love for Eric Cantona has never gone away, through the simple passage of time it may for some have faded a touch.

This book brings it roaring back to the forefront of your mind and heart.

As you relive the matches, the goals, the controversies, the quotes and the genius of Le King through Wayne's words you will rediscover your passion for a man all United fans of all ages lucky enough to have experienced his time at the club have for him.

Eric transformed Manchester United from very, very good to great...and he did the same for those who played around him.

That is a consistent theme throughout this excellent book. Just how transformational he was. A catalyst, a stroke of genius and a genius himself.

There are several books on Cantona, including his own, and all are worth reading. This one though now stands head and shoulders above them, it's chest thrust out, it's collar turned up.

But it's not just a book for those who saw him play. It's for everyone, not least the generation that didn't get to sing his name from the Stretford End as he chipped in another sublime goal.

This is an education on the player that made Manchester United great again, a lesson in just what it takes to become a King, the foundation on which a dynasty that lasted far longer than his time with us was built.

Eric belongs in the pantheon of United legends alongside Best, Law and Charlton, the Babes, Busby and Ferguson.

King Eric explains why with 4DUltra colour and sharpness, in an extremely accessible way and with impeccable attention to detail.

I read it in a day. I am as much in love with Cantona now as I was watching him strut his stuff back in the day.

Seriously, commission Wayne to write about your other half if you want the spark back. He can do it.
Read more
2 people found this helpful
Helpful
Sending feedback...
Thank you for your feedback.
Sorry, we failed to record your vote. Please try again
Report abuse

Nicola
5.0 out of 5 stars The book you wish you wrote about the footballer you wanted to be.
Reviewed in the United Kingdom on 6 May 2020
Verified Purchase
I am an unashamed fan of the authors work. A fellow United fan, Mr Barton's books bring a fresh look on the storied history of my club. This book, like the authors other books, is researched impeccably. There is relevant and necessary press quotes and contemporary interviews give the book a very authentic feel.
Eric Cantona for many is one of the most important footballers in the history of Manchester United and this book outlines why as we are taken on a journey of his career in English football.
Even though so much has been written about Cantona, Mr Barton expertly finds different angles throughout the book to retell Cantona's story. As a United addict and a Cantona fan, it was wonderful to reminisce the goals and games of my youth; many of which I was there to witness live.
I would consider myself a football romantic and I loved the way part of the book took the idea that Cantona arrived at his spiritual home, Old Trafford, with a description and discussion emanating from the 1950s citing Jimmy Hogan’s influence on the club. Brilliant and thought provoking.
There is so much to like about the book, and it comes highly recommended. And just look at that stunning cover!
For me, the best compliment I can pay the book is if you are a fan of Eric Cantona then this is the book you wish you wrote about the footballer you wanted to be. Simply brilliant and like the man himself 'c’est magnifique'. (Michael Pieri)
Read more
Helpful
Sending feedback...
Thank you for your feedback.
Sorry, we failed to record your vote. Please try again
Report abuse

veras
5.0 out of 5 stars Gift
Reviewed in the United Kingdom on 8 April 2020
Verified Purchase
Bought as a gift
Read more
Helpful
Sending feedback...
Thank you for your feedback.
Sorry, we failed to record your vote. Please try again
Report abuse

david
5.0 out of 5 stars Long live the king
Reviewed in the United Kingdom on 16 April 2020
Verified Purchase
Just a great read and just as mesmerising as when King Eric played all the years ago God how has time gone so quickly will always be my best and favorite player and person ever
Read more
Helpful
Sending feedback...
Thank you for your feedback.
Sorry, we failed to record your vote. Please try again
Report abuse

Pauline
5.0 out of 5 stars A must for all fans of Eric
Reviewed in the United Kingdom on 1 May 2020
Verified Purchase
Bought as a gift. A great read for all cantona fans.
Read more
Helpful
Sending feedback...
Thank you for your feedback.
Sorry, we failed to record your vote. Please try again
Report abuse
Load more international reviews