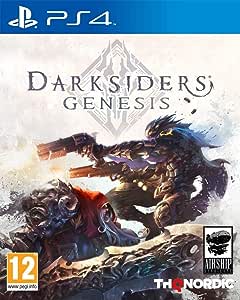 From the dawn of creation, the council has maintained the Balance across existence. Carrying out their orders are the Horsemen, Nephilim (powerful beings spawned from the unnatural union of angels and demons) who have pledged themselves to the Council and been granted immense power. However, this power came at a tragic cost: the Horsemen were ordered to use their newfound strength to wipe out the rest of their kind. What followed was a bloody battle on Eden where the Horsemen, obeying the will of the Council, annihilated the Nephilim. Darksiders: Genesis is an action/adventure that tears its way through hordes of demons, angels, and everything in-between on its way to Hell and back with guns blazing and swords swinging. Genesis gives players their first look at the world of Darksiders before the events of the original game, as well as introduces the horseman Strife. Features: Blast angels and demons as the gunslinging Horseman Strife, playable for the first time Swap between the powerful swordsman War and Strife instantly in frenetic, single-player gameplay Explore the epic world of Darksiders and wreak havoc with a friend in two-player cooperative mode Experience a brand new story campaign that takes place before the original Darksiders, exploring the origin of the Seven Seals Grow in strength and power as you collect items, abilities, weapon enhancements, creature cores and more

Amazon Customer
2.0 out of 5 stars Wtf happened ere then?
Reviewed in the United Kingdom on 16 February 2020
Verified Purchase
Well having loved every other title in this series this is a huge let down to say the least. THQNORDIC what have you done?! This is a total rip off, of diablo! Maybe my own fault for not researching this more but as all other darksiders have been excellent in every way i didnt think i had to. The plus side has come from amazons pre order promise, so i'll at least be getting a fiver back. I feel like im playing a playstation 2 game, watching these tiny little characters running around the screen. So not the same calibre as all the other darksiders games have been. The 2 stars come from the witty comments from strife every now and again. Wait til it goes down some more unless your a fan of diablo kind of games. Which i am not as you can tell lol.
Read more

King
2.0 out of 5 stars WTF?!?
Reviewed in the United Kingdom on 23 March 2020
Verified Purchase
First off, I love the Darksiders line, but seriously WTF is with this game? What have they done to it? It has just become extremely annoying with extremely s@£t metrics that makes the platform bits sooo F@£$%^g annoying, the amount of times I've missed jumps because of the crap way it looks has nearly made me want to throw my controller at the t.v! Usually I'm a pretty decent gamer but this game pisses me off no end, it's not the progression, that's fine but getting the items with the way of out whack 3D isometrics is just annoying, not fun. What happened to Darksiders it was a top notch franchise. The cut scenes are just still pic with voice over, so poor, it just takes you out of the environment, it's pants. Overall the it's ok, but nothing like before it is a disappointment to say the least... buy it when it's a £10 then you wont be pissed off...
Read more
One person found this helpful
Helpful
Sending feedback...
Thank you for your feedback.
Sorry, we failed to record your vote. Please try again
Report abuse

Mr Greg O Sullivan
1.0 out of 5 stars Stay away from this if you actually like Darksiders
Reviewed in the United Kingdom on 1 March 2020
Verified Purchase
This is not a Darksiders game. I did read the reviews. Bought it anyway cause I like the franchise but this is pure rubbish. Can't see the characters. Can play solely as War (what's the point in having Strife). I'm so disappointed.
Read more
2 people found this helpful
Helpful
Sending feedback...
Thank you for your feedback.
Sorry, we failed to record your vote. Please try again
Report abuse

michael
3.0 out of 5 stars Meh
Reviewed in the United Kingdom on 15 February 2020
Verified Purchase
Not a fan of the diablo style gameplay which takes away from the other 3 games and it goes to show what the creators thought of strife as you can just go as war throughout the game instead the fact they have switched to an online multiplayer mode rather than keeping it the single player platformer its been known for has ruined the game
Read more
One person found this helpful
Helpful
Sending feedback...
Thank you for your feedback.
Sorry, we failed to record your vote. Please try again
Report abuse

Amazon Customer
3.0 out of 5 stars Fun game, but co-op has awful glitches and generally could have been better quality
Reviewed in the United Kingdom on 31 March 2020
Verified Purchase
Overall a fun game so far; bought to play as local co-op. However, the awkward camera angles and the lack of mini-map is frustrating. Had a glitch in the end of Chapter 4 which meant we couldn't progress and had to restart the entire chapter. The echoing voices are also annoying.
Read more
Helpful
Sending feedback...
Thank you for your feedback.
Sorry, we failed to record your vote. Please try again
Report abuse
Load more international reviews

Ben Lewis
5.0 out of 5 stars The awesome Darksiders continues.
Reviewed in the United Kingdom on 3 March 2020
Verified Purchase
Stunning game and a load of fun. Set centuries before the original Darksiders you finally get to play as Strife and my god is this game a load of fun. Great story, always enjoyed the lore to the Darksiders game, and the isometric view doesn't harm the game at all, this game is Darksiders through and through. This is now my second favourite Darksiders after the original. Play on Apocalypse for some hectic carnage it's loads of fun.
Read more
Helpful
Sending feedback...
Thank you for your feedback.
Sorry, we failed to record your vote. Please try again
Report abuse

Ivan elvis blase
4.0 out of 5 stars Nice change from the last darksiders game .
Reviewed in the United Kingdom on 27 February 2020
Verified Purchase
Been playing this for a few hours now and it's pretty adictive, plenty to explore and puzzles to crack it's a good game and looks great, only gave 4 stars as the pulled back diablo style camera gets annoying when platforming but the good out weighs the bad it's a good game .
Read more
Helpful
Sending feedback...
Thank you for your feedback.
Sorry, we failed to record your vote. Please try again
Report abuse

See all reviews from Australia