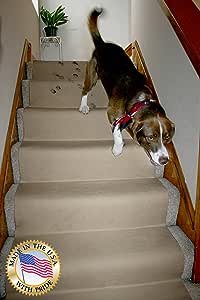 Size: 12"L x 30"W Protect your floor and carpeting from wear in high traffic areas by simply rolling out the LAMINET Carpet and Floor Protector. Great for temporary protection on any floor surface. Great for pets, RV's and boats. Unique Non-Slip backing grips to carpeting, tile or hardwood flooring. Our Carpet and Floor Protector can be easily cut to fit any area. Place the Carpet and Floor Protector by each entrance of your home to catch dirt and water before it creates a mess. These Carpet & Floor Protectors are easy to clean! Machine Wash on Delicate Cycle with Warm or Cold water and Machine Dry on Low Heat - or for longer life Line Dry. MATERIALS: 70% Cotton, 30% Polyester with Urethane Foam Backing. MADE IN USA SIZE OPTIONS: 6'L x 30"W 9'L x 30"W 15'L x 30"W 20'L x 30"W 30'L x 30"W

3.7 out of 5 stars
3.7 out of 5
191 global ratings
How are ratings calculated?
To calculate the overall star rating and percentage breakdown by star, we don’t use a simple average. Instead, our system considers things like how recent a review is and if the reviewer bought the item on Amazon. It also analyses reviews to verify trustworthiness.

RMOC
2.0 out of 5 stars Not suitable for households with kids and frequent use of the stairs
Reviewed in the United States on 10 September 2019
Verified Purchase
The photo from the seller showing the dog running down the stairs with the laminate covering the stairs so nicely without any crease is not how it looks for us. See the photos and you see what I mean. As soon as we started spreading it over the stairs and the kids started running up and down it started rolling and slipping. I try to fix it every time I use the stairs but that job became old after a month or so and now it looks as you see in the photos. We washed them twice and that is a good thing that they are machine washable but if you wash them often you probably wear them out and the sides start rolling. In general, this is not bad of a solution for households with adults and infrequent use of the stairs but for households with teenagers and kids and frequent use of stairs, this is not a good solution at all and you definitely should avoid buying this product.
Read more

FrogsOnTheRun
5.0 out of 5 stars only real solution for carpeted stairs
Reviewed in the United States on 26 September 2020
Size Name: 9'L x 30"WColour Name: BeigeVerified Purchase
Use this on stairs to decrease wear from foot traffic, and also protect from spills of carrying coffee, drinks or food up and down. Isn't water proof, but sufficiently protects from stains nonetheless.

Had one of these runners for years that got I don't know where, but than couldn't find replacement, so continued to use years more past it's expiration, had to of been more than a decade and the thing was disintegrating. Friend took pity and found it on here, but only got a 15' length, but than I was able to find it too, instead returning and ordering full length I just ordered extra 9' which was more than needed, but 6' was same price and though would use extra fabric something else. Though ended up just overlapping which worked nice. Having it in two pieces is little more manageable (when remove/replace for guests or cleaning) and not bad way to go.

But 20' length would be sufficient one-piece for normal flight stairs.

The cats loved to tangle themselves up in the old one, but after replaced, they have stopped doing that for whatever reason. I won't complain, less having to fix it.

Read review complained of having straighten it a lot. I mean it is what it is, I guess it depends what kind carpet you have and the nature of the traffic on how well it will stay in place. the old one was having fix a lot because of cats, but sense I replaced it the issue has gone away. either way, I find it the only realistic solution for carpeted steps protection is my opinion from what I seen.

But for clarity of what you get, these are lightweight, thin fabric on traffic side, and sort of thin foam on carpet side. As I recall the old one I had originally had sort of a rubber coating on the foam side that was probably suppose to increase grip but it wore off over the years from washing or use. This one didn't have that from start, they probably found it works better without, at least I think it does.

Emily Dohse
4.0 out of 5 stars A must for protecting your stair carpet from pets
Reviewed in the United States on 15 September 2017
Size Name: 9'L x 30"WColour Name: BeigeVerified Purchase
This protector does the job of helping me stop my cat from eating the carpet on my staircase. The color doesn't match perfectly, but I'm renting for a couple years so mainly just need to make sure I leave with the carpet intact. The protector also doesn't fully reach across the stairs, which is ok since my cat for some reason is only interested in one side, but I'd prefer a tight fit so she can't get in anywhere. It sticks well to the carpet underneath, and is super easy to clean. I will probably repurchase this item as needed as long as I have pets. It's a must for protection, but I wish the color matched my carpet better and the fit was more full coverage.
Read more
8 people found this helpful
Report abuse
See all reviews
Get FREE delivery with Amazon Prime
Prime members enjoy FREE Delivery and exclusive access to movies, TV shows, music, Kindle e-books, Twitch Prime, and more.
> Get Started
Back to top
Get to Know Us
Make Money with Us
Let Us Help You
And don't forget:
© 1996-2020, Amazon.com, Inc. or its affiliates