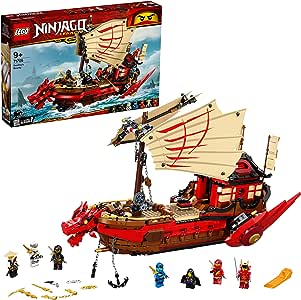 Spectacular ninja ship and 7 minifigures for kids to recreate action on the seas from season 1 of the NINJAGO TV series.

This incredible playset will captivate youngsters and provide them with a world of endless play scenarios.

This 1,781-piece playset provides a rewarding build for kids aged 9+ before they indulge their imaginations with roleplay.

4.8 out of 5 stars
4.8 out of 5
389 global ratings
How are ratings calculated?
To calculate the overall star rating and percentage breakdown by star, we don’t use a simple average. Instead, our system considers things like how recent a review is and if the reviewer bought the item on Amazon. It also analyses reviews to verify trustworthiness.

Amazon Customer
5.0 out of 5 stars Great service, excellent product!
Reviewed in Australia on 13 November 2020
Verified Purchase
I ordered Destiny Bounty one and a half months before my grandson’s 6th birthday. The delivery was very fast👍.
My grandson loved his present. The big smile on his face was all the thanks I needed.

Ann
5.0 out of 5 stars Amazing set
Reviewed in Australia on 10 July 2020
Verified Purchase
Brought this for my son birthday, he think the set is amazing.
Read more
Helpful
Comment Report abuse

Steven Brown
4.0 out of 5 stars Very good Lego set though fragile
Reviewed in the United Kingdom on 10 July 2020
Verified Purchase
My sons are obsessed with Lego just now, so pooled their resource and got the Destiny's Bounty.
This is a "legacy" set, a new version of the season 1 Destiny's Bounty. The brick count is a bit less than the one that was released with the Ninjago film, but at over 1700 pieces, it's still a very chunky build.

The build is fun and interesting. There are only a few bits that are challenging and needed a wee bit of extra help, but in general it was a good, layered build, even building the base hull of the ship was quite interesting, you can see from the pictures that the first level of the ship has lots of different sections and detail.
There is a nice little hold section which gets a grate put over it, and the cabin is a nice section. It's small but easy to detach and open out.

There is an excellent area of mini figs - 7 in total, in particular I was impressed with the array of golden weapons, more than enough to share out amongs the 7 figures plus any other figures you already have.

It's an excellent set, but the main downside that makes it a 4 star set rather than 5 is that it is fairly fragile for active play. In particular the railings road the ship have various pieces that are only stuck on with 1 or 2 studs, and fall off at the drop of a hat. The dragons head also seems to be prone to breaking, without much force it can easily end up in pieces, and can often be non-intuitive to put back together, so have had to step back to the instructions a couple of times.

In summary, a great Lego kit. Fairly expensive, but there is a lot of building out of it, as well as a lot of play, could just do with being a bit more robust.

Claire
4.0 out of 5 stars Great Lego but NOT BOXED and visible for everyone to see
Reviewed in the United Kingdom on 30 November 2020
Verified Purchase
Looks great and will tick all the boxes of a Lego/Ninjago mad 5year old. I will add that it didn’t come in a covered box or paper bag and was left on show on the door mat. I’m all up for no added waste but A-not helpful at all for a Christmas gift for a child who can clearly see it. B-£84 worth of Lego on show for anyone to walk past and collect off the door step. Just a heads up for other buyers!!!!
Read more
Report abuse

Butterflygirl
5.0 out of 5 stars excellent
Reviewed in the United Kingdom on 29 September 2020
Verified Purchase
my son loves his lego. This is excellent and a good price. Recommended!
Read more
Report abuse

ntk
5.0 out of 5 stars Great for Lego Ninjago lovers
Reviewed in the United Kingdom on 17 August 2020
Verified Purchase
My 8 and 9 years old sons love Lego destiny's bounty. It almost took them 9 hours to build it.
Read more
Report abuse
See all reviews
Get FREE delivery with Amazon Prime
Prime members enjoy FREE Delivery and exclusive access to movies, TV shows, music, Kindle e-books, Twitch Prime, and more.
> Get Started
Back to top
Get to Know Us
Make Money with Us
Let Us Help You
And don't forget:
© 1996-2020, Amazon.com, Inc. or its affiliates