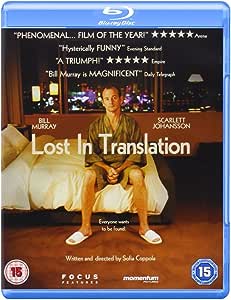 Winner of an Academy Award in 2003 for best original screenplay and three Golden Globe awards including best actor for Bill Murray, Sofia Coppola's poignant drama about Americans abroad stars Bill Murray as Bob Harris, a movie actor well past his prime who is in Tokyo to shoot a whiskey commercial.Jet-lagged and disillusioned, Bob spends most of his free time in the hotel bar, where he meets Charlotte (Scarlett Johansson).She is married to John (Giovanni Ribisi), a successful photographer in Tokyo on an assignment, who pays her scant attention, leaving her to her own devices most of the time.Both bored and lonely, Bob and Charlotte become friends, and form a strong and meaningful bond as they explore Tokyo together.The two share a dissatisfaction with their lives: Charlotte is intelligent enough to understand that her marriage is going nowhere, and Bob's relationship with his wife has become more like a business partnership (his wife communicates with him by Fed-Exing upholstery samples for his new study to the hotel) than a marriage.As their friendship develops, the fun and warmth they are getting from it serves to highlight the lack of affection in their marriages, and they both start to gain an insight into what really matters in their lives.
Technical Specs: * Languages(s): English
* Interactive Menu
* Scene Access
Extras included: * Behind the Scenes
* Bonus Footage
* Bonus Tracks: Kevin Shields 'City Girl' Music Video
* Interviews: Bill Murray (Actor), Sofia Coppola (Director)
* 'Matthew's Best Hit TV- Extended Scenes'
* Trailers

4.6 out of 5 stars
4.6 out of 5
842 global ratings
How are ratings calculated?
To calculate the overall star rating and percentage breakdown by star, we don’t use a simple average. Instead, our system considers things like how recent a review is and if the reviewer bought the item on Amazon. It also analyses reviews to verify trustworthiness.

Chantelle
3.0 out of 5 stars One Time Watch, But Worth Seeing On A Rainy Day
Reviewed in Australia on 25 September 2020
Verified Purchase
Great actors in a movie that's a little long for its pace. It was a down to earth flick, and the characters were quite relatable. I did enjoy it, but probably won't watch it again :)
Read more
Helpful
Comment Report abuse
See all reviews

F. V. L. Buliciri
5.0 out of 5 stars East Meets West in Tokyo
Reviewed in the United Kingdom on 13 November 2017
Verified Purchase
Lost in Translation is one of my favourite films and it would be on my list of top ten films of all time.

Sometimes an individual has to go overseas in order to assess and take stock of their lives.A middle aged American actor, Bob Harris travels to Tokyo, Japan to film a whisky commercial and a young college graduate, Charlotte accompanies her photographer husband on his work assignment to Tokyo, Japan. Their paths cross, their lives interconnect and they develop a close friendship through which they see life with a renewed vision of hope embracing what lies ahead in the future.

Sofia Coppols has directed a timeless, cinema classic and masterpiece with Lost in Translation for which she won the 2004, Best Original Screenplay Academy Award. Bill Murray is excellent in one of the best roles of his career as Bob Harris winning BAFTA and Golden Globe awards. He is brilliantly supported by Scarlett Johansson as Charlotte for which she earned a BAFTA award.

chris cotton
5.0 out of 5 stars If you love Bill Murray you will love this film
Reviewed in the United Kingdom on 27 March 2017
Verified Purchase
If you like bill Murray you will love this film, it's hard to explain what makes this film great. You become a voyeur, watching an unlikely coming together of 2 lost soles, 2 people who would ordinarily walk straight past each other, but in this amazing country they both share a common interest, they're both lost and alone. It has a beautiful pace, it ambles and strolls thru a short period in their life, a period that could go many different ways. It is really a happy tale of remembering what's important, remember to live your life and remember to not take everything for granted. It is not lol or adventure, but is is a beautifully told tale
Read more
11 people found this helpful
Report abuse

boogalouie
2.0 out of 5 stars Lost in history as well as translation
Reviewed in the United Kingdom on 4 November 2019
Verified Purchase
Not our favourite. Bought out of curiosity and admiration of the actors, we found this all rather passe. This may be due to our lack of appreciation or admiration for everyone's' hero Bill Murray, but it is now so out of time. Possibly a masterpiece of its time, but out of time today?
Read more
One person found this helpful
Report abuse

Caped Crusader
3.0 out of 5 stars Love the film, not the blu ray
Reviewed in the United Kingdom on 11 June 2014
Verified Purchase
This is a sweet and subtle story in which Bill Murray kind of plays himself; an ageing movie star on assignment in Japan filming a whiskey commercial. He's not happy, and it isn't just the jet lag. He feels himself growing further and further apart from his wife and kids back home who seem only to exist through late night phone calls while they go about their daily routine, barely paying him attention in the process.

At the same time, Charlotte (played by Johansson), another guest at the same hotel, seems to be realising she married the wrong guy, who's out all day every day photographing Japanese boy bands leaving her alone to turn things over and over in her mind. Eventually Bill and Charlotte notice each other. 'Alone' in the sky high hotel in a totally alien environment, they drift together.

While it is one of my favourite films, I'm afraid I found the upgrade to Blu Ray a little disappointing. The movie transfer is very grainy. Not that I mind grain on film usually, as long as it doesn't distract. And it does here.

Mr C
4.0 out of 5 stars Modern classic in need of a new transfer.
Reviewed in the United Kingdom on 13 July 2019
Verified Purchase
5 stars for the movie, 3 stars for the dated Blu-ray transfer.
It is still the best it has looked on a home format and it is might be limited by the quality of the source elements but I would like to think it could be improved. Maybe if criterion gets it or if it gets a 4k release.

Read more
Report abuse
See all reviews
Get FREE delivery with Amazon Prime
Prime members enjoy FREE Delivery and exclusive access to movies, TV shows, music, Kindle e-books, Twitch Prime, and more.
> Get Started
Back to top
Get to Know Us
Make Money with Us
Let Us Help You
And don't forget:
© 1996-2020, Amazon.com, Inc. or its affiliates