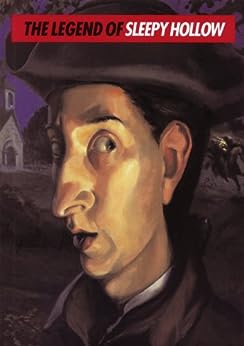 The Legend of Sleepy Hollow & Other Tales Kindle Edition

by Washington Irving (Author), Michael J. Marshall (Editor), Rebecca Beall Barns (Editor), E. D. Hirsch Jr. (Introduction) & 1 more Format: Kindle Edition
See all formats and editions
Sorry, there was a problem loading this page. Try again.
At the time of the American Revolution Europeans tended to think of America as rough and uncivilized. Washington Irving’s short stories came as a surprise to them. Indeed, a great part of his fame in America rested on the fact that he was the first New World writer who Old World readers considered worth reading.

Short stories themselves were new, too, and Irving’s tales showed what their possibilities were. His sketches, as he called them, were entertaining, not preachy, as other short pieces of that era tended to be. They had distinctive characters in vivid settings. When his classically clear style joined those elements, Irving’s tales became polished and satisfying.

Irving was certain that humor is life’s saving grace. In the preface to one of his books of tales, he said, “I have always had an opinion that much good might be done by keeping mankind in good humor with each other.” He wrote for pleasure and to give pleasure, but not just for the sake of being funny. His comic sense is rooted in his understanding of life’s strange truths and sometimes sad twists.

“The Legend of Sleepy Hollow” and “Rip Van Winkle” have been among Americans’ favorite stories since the day they first appeared. They are based on older German folktales whose settings are shifted to the Hudson River Valley in the days of New York’s Dutch settlers, who had a reputation for being superstitious and fond of practical jokes. In both stories, those times have the aura of legend attached to them. Irving saw that the revolution of 1776 ended more than colonial government. The new nation, young and energetic, shook off old ways, including some that Irving found comforting. So, in remembrance, he gave the newborn United States myths of its past.

In “The Legend of Sleepy Hollow,” Ichabod Crane, a spindly Connecticut schoolmaster, and Brom Bones, a strapping young Dutch farmer, are rivals for the affections of a blossoming farm lass, Katrina Van Tassel. Ichabod loves her for the bounty of her father’s barn. Brom loves her for her figure. Ichabod’s plans for parlaying the Van Tassel farm into a new mansion on the western frontier contrasts with the fun-loving nature of Brom Bones and hints that Irving saw his new country as becoming too caught up with money and status.

“Rip Van Winkle” is a fantasy of escape from adult responsibility. Rip is an overgrown child who sleeps through the years when he should be mature and able to take of himself and others. Sometimes we do wish we could be irresponsible and the story imagines a magical way to put into the past duties that might be unpleasant. But as Rip sleeps his world passes away. Rip does not fear the strange little men he meets deep in the mountains, but he does get scared when the people in his hometown no longer know who he is.

There were surely days when Irving, who regretted that he had idled through much his youth, would have been happy to curl up in a cozy corner and let time and worry just pass by. But in his tales he tells us we must accept changes, even when we don’t want them to happen.

The first American man of letters to make a distinct impression upon the Old World. (The Spectator) --This text refers to an alternate kindle_edition edition.

A classic tale of American Gothic, 'The Legend of Sleepy Hollow' has found a central place in the collective imagination and inspired many adaptations. Also included in this volume is a selection of some of Irving's most celebrated ghostly tales, such as 'The Phantom Island' and 'The Devil and Tom Walker'. --This text refers to an alternate kindle_edition edition.

Washington Irving was an American author, essayist, biographer, historian, and diplomat of the early 19th century. --This text refers to an alternate kindle_edition edition.
Read more

4.7 out of 5 stars
4.7 out of 5
138 global ratings
How are ratings calculated?
To calculate the overall star rating and percentage breakdown by star, we don’t use a simple average. Instead, our system considers things like how recent a review is and if the reviewer bought the item on Amazon. It also analyses reviews to verify trustworthiness.

Mrs. M.
5.0 out of 5 stars Beautiful book, quality printed
Reviewed in Canada on 15 October 2021
Verified Purchase
I'm a big fan of Canterbury Classics and own several of their leatherbound hardcovers. This is the first of their flexibound books that I've bought, and I wasn't disappointed. The cover feels lovely, like leather, with really cool embossed quotes. The pages are thick ivory paper, and the printing is good quality. As for the contents, so far I've only read The Legend of Sleepy Hollow and thought it was a spooky masterpiece. Irving's descriptions, especially of Ichabod Crane, are a hoot! I'm very pleased with this purchase.
Read more
Report abuse

Amina
4.0 out of 5 stars Another fine addition to my collection but...
Reviewed in Canada on 9 December 2021
Verified Purchase
I really love these flexibound books since they have beautiful covers, have good quality pages and they look nice on my bookshelf with my other books from the same publisher. Though my book came in a day late, I didn't mind too much since it was only a day late. Unfortunately, my book came in with some slight damage to the cover since it came in a large a box that also had another item I bought. Thankfully, no pages were ripped.

Pretty excited to read this though!

4.0 out of 5 stars Another fine addition to my collection but...
Reviewed in Canada on 9 December 2021
I really love these flexibound books since they have beautiful covers, have good quality pages and they look nice on my bookshelf with my other books from the same publisher. Though my book came in a day late, I didn't mind too much since it was only a day late. Unfortunately, my book came in with some slight damage to the cover since it came in a large a box that also had another item I bought. Thankfully, no pages were ripped.

Pretty excited to read this though!

Customer
4.0 out of 5 stars Great book, don’t order with other items that could damage it in shipping. 🙈
Reviewed in Canada on 13 December 2019
Verified Purchase
Amazon shipped this book with a big bag of dog food, which had a hole in it. So the cover is all grease stained with dog food grease and the pages stink like dog food! 🙄 Enjoying the book, though!
Read more
One person found this helpful
Report abuse

Lalayna Harbottle
5.0 out of 5 stars perfect!!
Reviewed in Canada on 7 January 2021
Verified Purchase
Just received my book in the mail and it’s absolutely stunning! It arrived in perfect condition. can’t wait to dive into it!
Read more
Report abuse

vazhaithandu
5.0 out of 5 stars The Cover is Brown not Grey as shown in the Picture
Reviewed in India on 13 August 2019
Verified Purchase
Wonderful book.
Read more
Report abuse
See all reviews
Back to top
Get to Know Us
Make Money with Us
Let Us Help You
And don't forget:
© 1996-2022, Amazon.com, Inc. or its affiliates