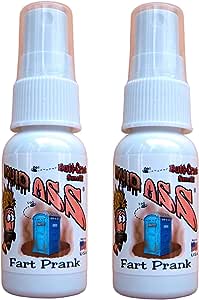 Liquid ASS is an overwhelming, stinky, funny prank product. Once unleashed, this power-packed, super-concentrated liquid begins to evaporate filling the air with a genuine, foul butt-crack smell with hints of dead animal and fresh poo. The funny pranks you can pull with Liquid ASS are unlimited. Watching the facial grimaces of people and hearing their comments about the part-your-hair, gagging stench will have you laughing until it hurts. Keep out of reach of children.

4.6 out of 5 stars
4.6 out of 5
12,748 global ratings
How are ratings calculated?
To calculate the overall star rating and percentage breakdown by star, we don’t use a simple average. Instead, our system considers things like how recent a review is and if the reviewer bought the item on Amazon. It also analyses reviews to verify trustworthiness.

roy m
5.0 out of 5 stars The best $20 I have ever spent
Reviewed in Australia on 26 July 2020
Style Name: SingleVerified Purchase
This spray is POTENT. The smell can be described as raw feces mixed with sweaty anus. Just 2 sprays cleared out an outdoor area for 25 minutes and had people checking their shoes when walking past. This is the ultimate area denial weapon however the brave individual that sprays it must wash their hands immediately after since their finger will smell like feces afterwards.
Read more
One person found this helpful
Helpful
Comment Report abuse

David H
5.0 out of 5 stars Funny and disgusting
Reviewed in Australia on 9 August 2020
Style Name: SingleVerified Purchase
This is the most disgusting smell you can imagine. Funny and disgusting all at the same time.
Read more
One person found this helpful
Helpful
Comment Report abuse
See all reviews

Amazon Customer
5.0 out of 5 stars Got my teen son to clean the ENTIRE house!
Reviewed in the United States on 2 May 2018
Style Name: SingleVerified Purchase
I bought this just to trick my 17 year old into cleaning his room... I never thought it would make him clean the ENTIRE HOUSE!! I secretly sprayed ONE pump of this in his room while he was sleeping on Saturday morning. A minute or so later I hear coughing and gagging. I went to his door and asked if he was ok. He said yes. But continued coughing. I asked if he had gotten sick because a strange smell was coming from his room. He said know. I asked well why does your room smell like sewage?! He looked at me with complete confusion and said I do not know. So I said well dude this is ridiculous! Your room smell horrible and you’re just laying around in this swamp smelling room?!! He said I don’t understand what’s going on! I said, I do! You need to clean this room! Yuck! And then walked away. He immediately started furiously cleaning... mopped the floor and wiped down the walls!! (He still smelled it because I would check in with him and of course secretly spray another pump lol!) Long story short just two pumps of this little bottle got my teen son to clean our entire house top to bottom looking for the culprit! Whenever his room gets out of hand I just spray once in his room and the cleaning supplies come out!! Best money I’ve spent on amazon! This product is AWESOME!
Read more
1,665 people found this helpful
Report abuse

Dancho
5.0 out of 5 stars Buy it. You know you want to.
Reviewed in the United States on 3 May 2018
Style Name: SingleVerified Purchase
I am usually the victim of pranks at work. I roll with them and never react the way the perpetrators expect. So I get some Liquid Ass and take it to work. First, though, I opened it and sprayed one tiny squirt in the driveway. With the garage door open. Oops. The husband comes home with the kid and comes in through the garage. He starts ranting about a dead animal in the garage and she ran upstairs to her room. An hour later, the cyclone fan was still on in the garage with the door open along with the back door. Heed the warnings: it's a cheap atomizer that leaks. Do not touch the bottle with your fingers: it does not wash off easily.

Next day at work, I carefully wrap a wet paper towel around bottle to protect my hand (wearing a glove would be too conspicuous). I sprayed two pumps on the handle of the witch across the hall's office door. Then I sprayed another one on the metal door jambe right at her nose level. Then I casually walked away. I could see her office through the window in mine. Cue her arrival about ten minutes later. By then several people have walked by and gasped/covered their noses/exclaimed something or another. She loudly asks nobody in particular, "What the hell is that smell?" Hand on door knob shoulder rubbing the door jambe. Mission accomplished.

A client showed up shortly thereafter to meet with her. He approached the office, said a few words, and left. By then she is smelling her hands over and over, wiping them on her skirt, crying out "What the F@*% is happening?" She walked into my reception area, which caused my assistants to pinch their noses and ask her if she had an accident. I was barely, and I mean barely, keeping my cool while observing this. She goes into her office and a few minutes later, a maintenance man shows up at her door. She runs toward him and he takes a step back and buries his nose in his elbow, shaking his head, and quickly escaped. At that point, I had to close my blinds and laugh until I cried. I am heaving with laughter as I type this.

Bottom line: it is not fart smelling at all. It is nauseating. It physically makes me nauseous. Like eating spoiled ranch dressing nauseous. The profile has base notes of rotten, rancid organic material along with decaying mammal flesh. The top notes remind one of fæces of a cat that eats wet food and tuna juice along with a thigh-high pig sty on the hottest, most humid August afternoon in the south. When I was a teenager, I once was at a basketball game and sat behind a morbidly obese woman who was wearing stretchy pants. There is no way in the world that she could have reached her butt to wipe or wash, even with a long-handled brush. She always smelled horrendous, like petri dishes of bacteria growing in the folds of her fat, but mostly she smelled like putrid, festering ass. She hefted herself up and down as best she could the whole game, and when she landed back in her seat, she blasted me and my best friend with a foul, nasty ass smell, right in the face. Liquid Ass is on par with that odor, only really, really concentrated.

Read more
699 people found this helpful
Report abuse
See all reviews
Get FREE delivery with Amazon Prime
Prime members enjoy FREE Delivery and exclusive access to movies, TV shows, music, Kindle e-books, Twitch Prime, and more.
> Get Started
Back to top
Get to Know Us
Make Money with Us
Let Us Help You
And don't forget:
© 1996-2020, Amazon.com, Inc. or its affiliates