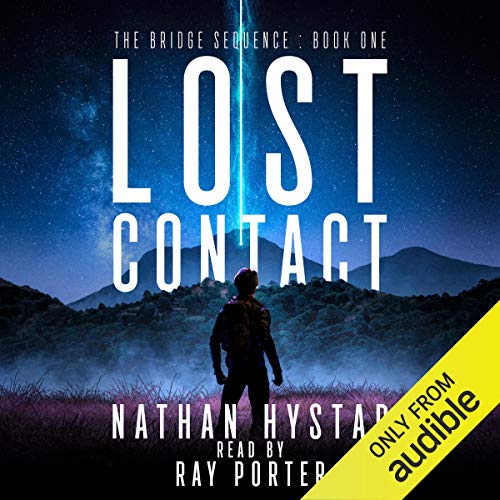 Rex Walker always wanted to be like his father: a daring, adventurous man, traveling the world in pursuit of mysterious relics. Now Rex is the same age his father was when he disappeared without a trace.

While teaching anthropology at a Boston college, Rex attempts to bury the past, until he discovers a hidden clue he can’t ignore.

With the help of his sidekick Marcus, a former student turned protégé, he teams up with an alien-obsessed billionaire, and they search for the fabled Bridge.

As an unidentified object nears Pluto, speculation surges. Some hail it as the homecoming of a distant alien race, and this cult is unwavering in its efforts to usher our world into a new era.

Will Rex solve the puzzle before it’s too late? Find out in Lost Contact, the first installment of The Bridge Sequence by Nathan Hystad, the best-selling author of The Event.

4.2 out of 5 stars
4.2 out of 5
1,068 global ratings
How are ratings calculated?
To calculate the overall star rating and percentage breakdown by star, we don’t use a simple average. Instead, our system considers things like how recent a review is and if the reviewer bought the item on Amazon. It also analyses reviews to verify trustworthiness.

DressageDreamer
3.0 out of 5 stars Went nowhere
Reviewed in Australia on 30 December 2021
Verified Purchase
Lots of hunting for objects with plenty of action … but the author seemed to repeat the same sequence, with the hero always finding the key. Little history or links in the novel made it into a shallow hunt that needed more backing (sure mystery is good - but non-answered questions just add up and become silly).
Read more
Helpful
Report abuse

Kindle Customer
4.0 out of 5 stars Brilliant
Reviewed in Australia on 18 May 2021
Verified Purchase
Well that was different to the usual "saving the human race" books it is really unpredictable as to what will happen next.
Read more
Helpful
Report abuse

jg
3.0 out of 5 stars slow read
Reviewed in Australia on 28 May 2021
Verified Purchase
I found this book slow and repetitive in parts. The ending didn't inspire me to read the next book in the series.
Read more
Helpful
Report abuse

Steve
4.0 out of 5 stars Dan Browns Indiana Jones
Reviewed in the United Kingdom on 1 June 2021
Verified Purchase
Its one of those stories that, in my minds eye, would be depicted in film by a plane moving over a map with a dotted line trailing behind it. Like Indiana Jones this college teacher goes treasure hunting across the world and runs into all sorts of trouble. The secret society after them with spies and killers embedded everywhere is not the Catholic Church this time but alien followers. Same thing really I suppose. Our hero has a team with him all of which are suspicious at some point in the story as possibly being a killer alien supporter. Usefully, one of his team is an ex-Navy Seal - always useful to have around unless you suspect them.
The story goes at a fair pace but of course doesn't end properly. Although I quite enjoyed the read and tolerated the typos, I am still undecided whether to buy book2 - after all, that may just end with a third book. The synopses for book 2 doesn't really appeal.
Read more
3 people found this helpful
Report abuse

George Crawford
3.0 out of 5 stars Disappointing.
Reviewed in the United Kingdom on 2 November 2021
Verified Purchase
I could not finish this. The lead character was unsympathetic and barely sketched in. The overall premise was ill thought and poorly finished.
Read more
One person found this helpful
Report abuse

Kindle Customer
4.0 out of 5 stars Fascinating
Reviewed in the United Kingdom on 11 January 2022
Verified Purchase
What an intriguing beginning to what expects to be a riveting series. It definitely
Vets the juices flowing with the desire to read more. Looking forward with excitement to the next edition.
Read more
Report abuse

Dave & Linda
5.0 out of 5 stars Loved it
Reviewed in the United Kingdom on 18 June 2021
Verified Purchase
Wow right from the start this story had drooling for more I really got sucked in I can not wait for the next story thank you Nathan
Read more
Report abuse

H. Lennox
5.0 out of 5 stars A Great Read
Reviewed in the United Kingdom on 22 May 2021
Verified Purchase
Kept me going from the start to the end .
Can't wait for the next installment of this great series.
Read more
One person found this helpful
Report abuse
See all reviews