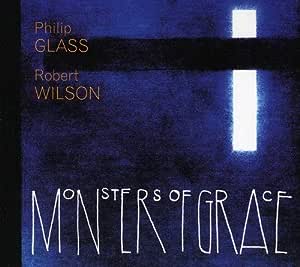 Starting with their monumental collaboration in 1976 with 'Einstein on the Beach', Philip Glass and Robert Wilson later became internationally known as leading creators of new music theater. In 1997, 'Monsters of Grace', which was billed as a "digital opera in 3-D", once again brought together these two creative giants in a production which included animated visuals of Robert Wilson's designs - viewed by the audience through 3-D glasses - with music by Philip Glass performed by the Philip Glass Ensemble and a cast of four singers. The 70-minute work was premiered at the UCLA Center for the Performing Arts, Los Angeles in April 1998.

This world premiere recording, with a 26-page booklet featuring Wilson's original 'Monsters of Grace' sketches, presents a transcendent Glass score which marries exotic sounds to the 13th century Sufi mystic poet Jelaluddin Rumi's words (translated/adapted from the original Persian by Coleman Banks) in a completely unique theatrical experience. Rumi's poems are meditations on the range of human experience: inspiration for Art, companionship and compassion, ruminations on earthly pleasures, questions of heaven, the secrets of life, joy, mortality, recognition of the self, and the nature of God.

As were all the other Glass/Wilson collaborations, 'Monsters of Grace' is ultimately forward looking and ambitious despite the difficulties and frustrations that occurred during its creation, mostly due to the challenge of new digital technology (the animation was ultimately extremely expensive, time consuming and inflexible). So this new recording represents a unique opportunity to re-assess a very unusual work. [The epilogue from Monsters of Grace is also on Paul Barnes' solo piano disc for Orange Mountain Music, 'The Orphée Suite for Piano.'

3.9 out of 5 stars
3.9 out of 5
10 global ratings
How are ratings calculated?
To calculate the overall star rating and percentage breakdown by star, we don’t use a simple average. Instead, our system considers things like how recent a review is and if the reviewer bought the item on Amazon. It also analyses reviews to verify trustworthiness.

Master Jacques
5.0 out of 5 stars Best since Hydrogen Jukebox
Reviewed in the United Kingdom on 2 December 2007
Verified Purchase
Philip Glass's output has perhaps become a little anodyne since the glory days of "Einstein...", "Satyagraha" and the wondrous "Akhnaten". One of his very best works from after that period was the Ginsberg stage song cycle "Hydrogen Jukebox", a haunting nocturnal evocation of the Great American Road-movie culture. If you enjoyed that then "Monsters of Grace" (director Robert Wilson's rich mishearing of the line "Ministers of Grace defend us" from "Hamlet"!) will most likely please you also. These 1998 settings of Sufi texts, many of them meditating on the twin poles of Art and Love, have that same shimmering delicacy and gentle poise which made the earlier cycle so satisfying. The musical imagery may not be so varied, but many of these songs have a clarity and point which deepens on closer acquaintance. For me, "Monsters of Grace" deserves a place amongst Glass's very best works: and neither recording nor the performers let him down.
Read more
11 people found this helpful
Report abuse

Joshua Bradford
4.0 out of 5 stars Rumi gets new life through Glass's musical settings
Reviewed in the United States on 5 November 2014
Verified Purchase
One of my favorite settings of texts by Philip Glass. Glassian fanatic here, don't be fooled I am biased towards his music, though I admit after 1995, many of his works come off rather lackluster and uninspired. But this is one of the many reasons I still continue to listen to Glass and look forward to his new works.

This opera was the first live Philip Glass event I was able to attend in early 1999, so it holds a special place for me. Though the 3D animation concept for the visual aspects of the work didn't really gel with me, I couldn't help but be drawn to the texts and the beautiful musical setting that Glass made for them. I would rank this musically as one of Glass's most accessible works, one that I hope finds its ways into more concert halls even without the visual elements.

The reason for the 4 stars is the recording itself. Though mixed extremely well, much like the cinematic mixing that Glass recordings normally receive (how does he get that), the performances can come off as uninspired. The bass and soprano are brilliant in their performances of the Rumi texts, but the other half of the voices seem to just plod along rather than truly enjoy the texts and music they've been given to sing. And although the ensemble plays well, I wish it was given more presence in the mixing of the faster sections of the work. So although I highly recommend the work itself, the recording I'm afraid might come off as boring to some listeners not familiar with the work already. Still, it's a beautiful addition to one building a Philip Glass collection as I am doing, and has already garnered repeated hearings since I purchased it last year.


Read more
2 people found this helpful
Report abuse
See all reviews
Get FREE delivery with Amazon Prime
Prime members enjoy FREE Delivery and exclusive access to movies, TV shows, music, Kindle e-books, Twitch Prime, and more.
> Get Started
Back to top
Get to Know Us
Make Money with Us
Let Us Help You
And don't forget:
© 1996-2020, Amazon.com, Inc. or its affiliates