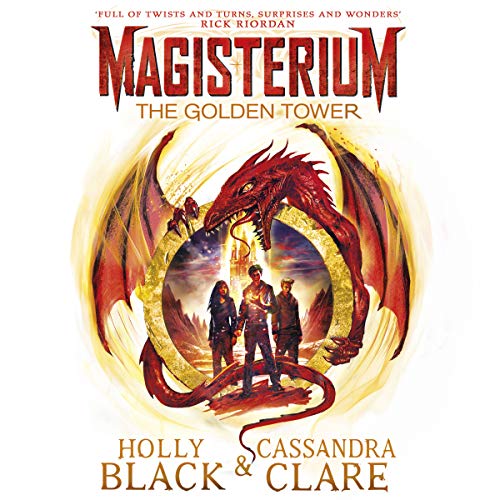 The final, thrilling instalment in this extraordinary series from best-selling authors Holly Black and Cassandra Clare.

A generation ago, powerful mage Constantine Madden came close to achieving what no magician had ever achieved: the ability to bring back the dead. He didn't succeed...but he did find a way to keep himself alive, inside a young child named Callum Hunt.

Facing up to what he is, Callum has battled chaos and evil across four years of magical training at the Magisterium, eventually defeating the armies of chaos in an epic battle.

It came at a cost.

Now, triumphant and heartbroken, Callum Hunt has just about had enough, and is ready to complete his training. But the evil Callum faced has not given up just yet....

4.7 out of 5 stars
4.7 out of 5
1,307 global ratings
How are ratings calculated?
To calculate the overall star rating and percentage breakdown by star, we don’t use a simple average. Instead, our system considers things like how recent a review is and if the reviewer bought the item on Amazon. It also analyses reviews to verify trustworthiness.

M.Hermens
4.0 out of 5 stars Loved the entire series
Reviewed in Australia on 21 September 2018
Verified Purchase
A great ending to a great series.
Read more
Helpful
Report abuse
See all reviews

Emma Louise Davey
5.0 out of 5 stars Brilliant
Reviewed in the United Kingdom on 22 May 2020
Verified Purchase
Arrived a little battered but I can get over that.
If you have read the other books in the series, this will be something you cant put down. I started reading an hour ago and I'm on page 135(with 2 children and a husband in lockdown!) A little on the light side for the page count but it's something you can easily read in one go, or spread out. Looking forward to reading with my eldest one day
Read more
One person found this helpful
Report abuse

catlady66
5.0 out of 5 stars Great book
Reviewed in the United Kingdom on 21 February 2019
Verified Purchase
Loved it great good to go through all the stuff with them from the start to the end with all the ups and downs they go through some sad bits an funny bits an scary an happy bits all together great stories well written books I do hope they do others similar to these the only down side for me was the way it ended it was a bit weird it was like is there going to be another one I don't know if it was me just reading into that or not but I would love to see more of these books they are meant for ya but saying that I loved them they are up there with the potter books just as good as they are I haven't read them never fancied them but these books are really good great story in each of the 5 books no boring bits grest stories couldn't put down will miss them defo recommend if like this sort of book don't be put off by it being for young adult it is suitable for adults as well well worth the money great read hope to see more from them
Read more
One person found this helpful
Report abuse

Yay!!
5.0 out of 5 stars Sarcastic, funny and fast paced.
Reviewed in the United Kingdom on 29 November 2018
Verified Purchase
This combination of authors (Holly Black and Cassandra Clare) seems to bring out the best of both, and this series is much better than their individual books. The text is sarcastic, funny, concise, and the plot is twisting and fast. Excellent characters, who are flawed, which makes the story.
The Magisterium series are books that you cannot put down, and I would be happy if they wrote 2 books a year of this series.
Read more
2 people found this helpful
Report abuse

Purplerose2030
4.0 out of 5 stars A great end
Reviewed in the United Kingdom on 13 September 2018
Verified Purchase
A great end to the series. From start of this series we were always kept guessing. But in the final book we get a satisfying if slightly flawed conclusion if you liked the rest of the books you will love this
Read more
3 people found this helpful
Report abuse

SoapyBubbles
5.0 out of 5 stars A good read for the final book
Reviewed in the United Kingdom on 20 December 2018
Verified Purchase
The product itself came in perfect condition.
NO SPOILERS-
The book was a nice read and a nice conclusion to the previous books. A few unexpected twists and turns with a few very expected twists and turns. I still enjoyed reading it regardless
Read more
2 people found this helpful
Report abuse
See all reviews