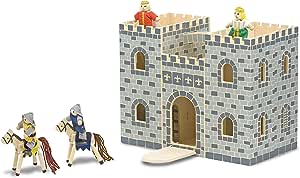 There was a problem adding this item to Cart. Please try again later.
We do not have any recommendations at this time
Continue shopping
New (2) from
$96.30 & FREE Delivery
Share

The Melissa And Doug Fold And Go Castle Allows For Compact And Portable Pretend Play This Mini Wooden Castle Opens Up To Reveal The Inside Of The Kingdom. Each Set Includes 11 Durable Wood Pieces. The King And Queen Have Thrones And A Royal Bed, While 2 Knights Are Ready On Horseback To Defend The Treasure Chest. A Working Drawbridge And A Dungeon Are Included To Add To The Imaginative Play The Fold And Go Castle Features A Chunky Wooden Handle For Easy Transport.

4.7 out of 5 stars
4.7 out of 5
3,569 global ratings
How are ratings calculated?
To calculate the overall star rating and percentage breakdown by star, we don’t use a simple average. Instead, our system considers things like how recent a review is and if the reviewer bought the item on Amazon. It also analyses reviews to verify trustworthiness.

Wendy F.
4.0 out of 5 stars Glad I got it on Sale
Reviewed in Australia on 1 November 2020
Colour: Multi/NoneVerified Purchase
I got this during Prime Day, I would never pay full price for it, It's just not worth the cost. But for the $45 that I paid I'm happy with that (Aussie dollars)
I just gave it to my 2yo today for her Birthday, my 5yo is also playing with it.
It's cute, I wish it came with more animals and it should have a clasp on it to keep it closed but I'll probably just add my own.
Read more
One person found this helpful
Helpful
Report abuse

Amazon Customer
3.0 out of 5 stars Needs a lock or hinge to hold together
Reviewed in Australia on 18 August 2019
Colour: Multi/NoneVerified Purchase
It's a great barn and I love that it's wooden. I don't like how you can't lock it shut. When my daughter packs it up and tried to move it it opens and the animals fall out. Cant pull it out of the shelf without it opening. Wouldn't have been that hard to get a little hinge on it or something.
Otherwise it's a great little barn. The quality of both the barn and the animals are great.
Read more
One person found this helpful
Helpful
Report abuse

NS
5.0 out of 5 stars The kids love it
Reviewed in Australia on 28 January 2021
Colour: Multi/NoneVerified Purchase
The Kids love it
Read more
Helpful
Report abuse
See all reviews

Deborah
5.0 out of 5 stars Beautifully designed with carrying handle
Reviewed in the United Kingdom on 29 December 2020
Colour: CastleVerified Purchase
Loved the castle. Bought for 4 year old. Can pack all his knights inside and carry it up to bed. Carry handle a big plus.
Read more
Report abuse

Going Forward ✌️
5.0 out of 5 stars On my must-have-toys list.
Reviewed in Canada on 24 September 2018
Colour: Multi/NoneVerified Purchase
.
Seven years ago as a first-time-Mom I was overwhelmed by the choices I had when it came to the Play world.
With time, walking the trail of trial and errors, I pinned my favorites: Melissa & Doug, Battat, Hape, Magformers, Tegu, Bruder, Alex Toys, Playmobil, Lego, Elenco and a few more. For the board games, those are ThinkFun, Peaceable Kingdom, Smart Games and some classics.

The thoughtfully designed and well-made toys and games are not cheap, but they worth the invested money and the benefits are immense.
That's the case when we can say: "less is more", for few quality toys will flourish child's development and will have a huge impact on kid's intellectual growth, while the poorly made trinkets will end up in the garbage bin before your kid had outgrown them.

During the last years, I bought quite a lot of "Melissa & Doug" - toys, games, playsets, puzzles and costumes and despite having kids that have that common to boys "anything can destroy" gift, "Melissa & Doug" toys still make it through.

Jess
5.0 out of 5 stars My son loves this toy.
Reviewed in Canada on 29 September 2018
Colour: Multi/NoneVerified Purchase
I bought this for my animal obsessed 5 year old. It was missing the fence when i got it but the manufacturer was quick to remedy that. It came with animals, which was a nice bonus. My son loves it and the ability to set up the fence as a fenced in yard or a seperate pasture. Very happy with my purchase.
Read more
Report abuse

Yvonne
4.0 out of 5 stars Love this set, but...
Reviewed in Canada on 29 August 2020
Colour: Multi/NoneVerified Purchase
I was a little disappointed after opening this package. The paint on the barn was quite sloppy, so I have replaced it another set. Otherwise, it's a great barn and I know my kiddos are going to have lots fun with it.
Read more

4.0 out of 5 stars Love this set, but...
Reviewed in Canada on 29 August 2020
I was a little disappointed after opening this package. The paint on the barn was quite sloppy, so I have replaced it another set. Otherwise, it's a great barn and I know my kiddos are going to have lots fun with it.
Images in this review