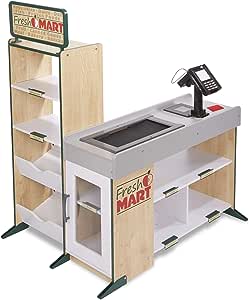 Shopping and playful purchasing is exciting at the sturdy wooden Fresh Mart Grocery Store! The free-standing play space with smooth, curved corners and edges lets customers three and older browse the shelves and pay for purchases on one side, and allows the grocer to ring up items on the other. Realistic features include beeping “scanner," a hand-crank conveyor belt, a card-swiping machine, a keypad/calculator, and cash drawer. Kids are sure to find everything on their shopping list at this friendly neighborhood grocery store!

Our toys, crafts, and games are designed to ignite imagination and a sense of wonder in all children.

Increasingly, doctors and child development experts around the world are recognising the value of hands-on, imaginative play.

And it is these skills that are crucial building blocks for success and personal fulfilment in adulthood.

Experts say the best toys are those that encourage interaction. Our toys are designed to inspire engagement and connection with your child. Many even include enrichment ideas right on the packaging. Because kids who can imagine the possibilities become grown-ups who can make their dreams a reality!

4.8 out of 5 stars
4.8 out of 5
2,529 global ratings
How are ratings calculated?
To calculate the overall star rating and percentage breakdown by star, we don’t use a simple average. Instead, our system considers things like how recent a review is and if the reviewer bought the item on Amazon. It also analyses reviews to verify trustworthiness.

James
5.0 out of 5 stars Top quality
Reviewed in Australia on 8 August 2020
Verified Purchase
Very impressed with the quality of this product. Easy to put together and my 5 year old daughter absolutely loves it. More expensive than others you can find but you get what you pay for.
Read more

CalgaryBen
4.0 out of 5 stars Easy to build and durable, will provide years of fun and imagination!
Reviewed in Canada on 24 December 2019
Verified Purchase
My son asked for this for Christmas, and I had the pleasure of building it for him. From a quality/design standpoint, this is very good -- the milling was precise which lent to a good fit/build. I did have to modify one part, and ended up tweaking the installation to facilitate future disassembly/moving, which is the one flaw/shortcoming.

All parts were received intact and in good condition, and instructions were clear and straight-forward. I supplied the powered Philips screwdriver, a hammer, and a knife. If you choose to follow my recommendation below, a countersinking bit will also help (but not absolutely necessary). Melissa and Doug have posted a YouTube video on the assembly (which I didn't know about or need), and the instructions can also be found on their website (I simply Googled Melissa and Doug 9340 instructions, and these are worth a look ahead of time).

The biggest flaw in the design of this checkout counter, in my opinion, is that the L-shaped arrangement does not readily disassemble into 2 pieces for easy storage/moving. This means you pretty much build it and leave it near where you built it (if your follow the provided assembly instructions exactly). It's possible to move, but it's 25" wide and 31" long (and 36" tall) so it's awkward, and even wider/longer if you attach the stabilizing feet (they add about 4" more). The way the screws anchor/secure the structure, they aren't easily removed for disassembly. I'll provide a simple modification which doesn't adversely impact the strength or structure.

I acknowledge the following information will be meaningless if you're just reading it! It is meant to be read/followed prior to undertaking the actual assembly procedure. To make disassembly easier in the future, you want to carry out steps in order but SKIP Step 8 (called "That's Right"), where you secure Board "I" to the rest of the counter. You can continue through other steps, and when you get to Step 13 (called "It's Bin Fun"), you can assemble the shelving unit on its own. This actually makes it much easier than with the "counter" portion attached. For me, at Step 12, Part "O" required cutting/notching an additional 1/8" out of the corner (a sharp knife is sufficient) to allow the drawer cover to slide all the way in, such that the front edge of "O" is flush with Part "K". As you're working through Steps 14-16, loose-fit the sides of the shelving (don't secure screws tightly yet), as this will give room for all the pieces to be put into place. The "S" pieces will seem about 1/16" too short, which I guess is by design due to the way they wanted them slipped in -- making them 1/16" longer and assembling my way would've made this a tighter/better fit. Step 17 is where you deviate from the manufacturer's instructions, where you secure one edge of Shelf "T" using 2x Screw #16 through the counter, underneath where the conveyor belt would go. If you do things as instructed by the manufacturer, disassembly of the structure becomes a lot of work, due to the inaccessibility of these 2 screws down the road. I've included a photo showing where the 2 screws are intended to inserted (red circles), where they traverse the sides of the shelving (blue circles), and into the white shelf board (part "T"). Instead of this, do not pass screws through the red circles (holes will be left unoccupied), but instead counter-sink the holes denoted by blue circles on Board "I" so that the screw can be inserted and secured flush. Just before proceeding to Step 18, I would then secure the shelving unit to the counter using 5 screws (basically go back to Step 8), plus the 1 other screw shown in Step 18. This way, you'll just have 6 screws to remove from the shelving side, if you ever need to separate the structure into 2 pieces for storage or relocating. If you want a slightly tighter fit (which would've been afforded by passing screws through the red holes I mentioned earlier), you can drill a 3/16" hole from the shelving side into the countertop, just above shelf "T" to twin the existing hole allowing the countertop to be secured. I didn't bother doing this.

Also, I found the plastic feet were not really necessary to stabilize things and simply stuck out too much for my liking (the weight and structure alone is not going to allow it to go anywhere, unless your kids are using this to launch themselves across the room or as a pommel horse or something). I stored those, along with extra hardware and instructions, all underneath where the conveyor belt goes. The feet also serve as a plastic glider so the structure isn't as likely to scuff your floor, so if that's of concern, I'd recommend getting some narrow peel-and-stick glider feet from your hardware store, and stick those on.

At the end of the day, this is a great little grocery store! My son will undoubtedly have lots of fun playing with it, and Dad had fun building it.

Amazon Customer
5.0 out of 5 stars Awesome Set!
Reviewed in Canada on 7 February 2020
Verified Purchase
My kids (7 and 9 years old) love this! Because they are a bit older and taller I built a base and secured it with brackets so they don’t have to bend over. I bought the accessory kit with it as well which has the magazines, gift cards and money for the till. Great quality and easy to put together.
Read more

Crystal
4.0 out of 5 stars Great for dramatic play!
Reviewed in Canada on 6 April 2019
Verified Purchase
My girls absolutely loved this! The way it’s set up is really great for imaginative play, with lots to do! The conveyor belt worked great and was a really neat feature. It was pretty easy to put together and very solid. My one complaint was that there was a big nick out of one of the shelves (visible) and one spot had been repaired with a wood like filler. There was no damage to the box and everything was very well wrapped inside the box so the damage must have happened before packaging. It’s frustrating to pay so much for something and have damage but it was already opened and not worth the return.
Read more

Brittany Pollard
5.0 out of 5 stars Such a great play toy
Reviewed in Canada on 10 January 2020
Verified Purchase
We got this for our two year old for Christmas as we sold all our older two children's things a while back. So impressed with this little grocery/shopping unit and so is he (and his older two brothers as well actually). Comes with a little credit card and signature pad (magna doodle style), and calculator on the other side, and the conveyor belt has a crank to move the groceries. As well as a sign with prices for some foods so will be handy for math at a later date as well. We also ordered a few of the additional grocery store/basket sets and will get more down the road as well. It didn't take my husband long to put together and seems really quite sturdy. Super fun! Wish I had toys like this when I was little.
Read more
Report abuse

One person found this helpful
Report abuse
Translate review to English
See all reviews
Get FREE delivery with Amazon Prime
Prime members enjoy FREE Delivery and exclusive access to movies, TV shows, music, Kindle e-books, Twitch Prime, and more.
> Get Started
Back to top
Get to Know Us
Make Money with Us
Let Us Help You
And don't forget:
© 1996-2020, Amazon.com, Inc. or its affiliates