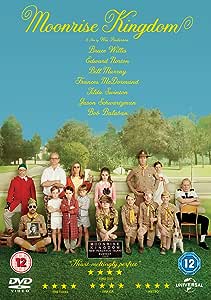 On an island off the coast of New England in the summer of 1965, two twelve-year-olds (Kara Hayward, Jared Gilman) who fall in love, make a secret pact and run away together into the wilderness. As a local search party led by the Sheriff (Bruce Willis) and the girl's parents (Bill Murray, Frances McDormand) try to hunt them down, a violent storm is brewing off-shore – and the peaceful island community is turned upside down in more ways than anyone can handle.Extras:- Set tour with Bill Murray

4.7 out of 5 stars
4.7 out of 5
1,303 global ratings
How are ratings calculated?
To calculate the overall star rating and percentage breakdown by star, we don’t use a simple average. Instead, our system considers things like how recent a review is and if the reviewer bought the item on Amazon. It also analyses reviews to verify trustworthiness.

Agnostic Duck
4.0 out of 5 stars A comedy? Quirky and offbeat certainly.
Reviewed in the United Kingdom on 14 February 2014
Verified Purchase
To be honest, I really did not know what to make of this film after the first watching.
I enjoyed it, but didn't find it that funny!!!!
The performances from the leads - Willis, Norton, Swinton and Murray are rather sublime but it's the strangely enigmatic acting from the 'young newbies' Jared Gilman and Kara Hayward that steal the show as two pubescent children taking comfort and solace in each others company as they escape the strangeness of their lives. Pursued by their respective so-called "responsible adults", (that's the funny bit, I suppose?), they desperately try to find consolation in an effort to make some sense out of their muddled lives.
I had to watch it three times before I could come to a conclusion - it is a good film; in my opinion a very thought provoking one.
Perhaps I took it too seriously? However, I found it hard not too!
Good film - not what I expected, but I think I got much more out of it because of this.

Barron
2.0 out of 5 stars Quirky, not worth watching
Reviewed in the United Kingdom on 19 October 2020
Verified Purchase
This was sold to me as being a remake of the classic British film "Melody" (also known as S.W.A.L.K.). Well, it is about two children who are in love, but there is none of the charm , wit or innocence of the original. It was a strange film. Most of the acting was wooden and sort of staccato. Killing the dog with an arrow through the neck was not necessary. The supposedly pubescent girl did not need to be seen in her bra and knickers, with the boy placing his hands on her chest, or subsequently the two of them in bed in a tent. The story could have been told much better with things implied rather than shown. Overall disappointing and not worth watching.
Read more
Report abuse

Ektor
5.0 out of 5 stars Sweet, witty and weirdly affecting
Reviewed in the United Kingdom on 27 January 2016
Verified Purchase
The preposterous plot and strange declamatory acting do nothing to detract from the sheer delight of this tender, sweet, witty and weirdly affecting little masterpiece. I especially loved the wonderful use of music, the countless visual jokes, and the gentle but determined way Wes Anderson subverts so many tired genres (troubled adolescents, missing children, unfulfilled lives, unlikely friendships). Warmly recommended - and for Wes Anderson fans an essential addition.
Read more
4 people found this helpful
Report abuse

RJC
5.0 out of 5 stars Weird but rather wonderful
Reviewed in the United Kingdom on 11 May 2017
Verified Purchase
Weird but rather wonderful. You WILL watch this more than once. The characters are all pretty much dysfunctional but in that oh-so-human way that we can easily relate too. You'll recognise traits in every one of them which make them al the more endearing :-) The kids do a sterling job of leading this star-studded cast. I just love it for those times I want some light (and slightly surreal) relief. Buy it!!
Read more
2 people found this helpful
Report abuse

Malcolm McDonald
1.0 out of 5 stars Appallingly Awful.
Reviewed in the United Kingdom on 10 July 2019
Verified Purchase
Taken me 7 years to get to see it,its a shambles of a movie,absolutely terrible.The cast is to kill for but the two young leads are played but two youngsters who clearly havnt acted before,the whole film disappoints on so many levels.I don't know what the other reviewers were watching.
Read more
Report abuse
See all reviews
Get FREE delivery with Amazon Prime
Prime members enjoy FREE Delivery and exclusive access to movies, TV shows, music, Kindle e-books, Twitch Prime, and more.
> Get Started
Back to top
Get to Know Us
Make Money with Us
Let Us Help You
And don't forget:
© 1996-2020, Amazon.com, Inc. or its affiliates