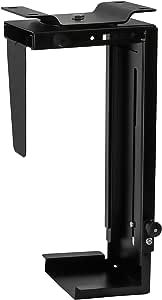 Visit the Mount-it! Store
3.9 out of 5 stars 45 ratings
Available from these sellers.

Mount-It! CPU Under Desk Mount Computer Tower Holder Place your CPU in a convenient and accessible location with the Mount-It! Adjustable Computer Tower Mount. The 360-degree swivel ensures easy access to cables and ports on the back of your CPU. It mounts to the underside of your work surface, to a side panel or to a wall to keep it conveniently accessible. Keep your computer safe by raising it off of the floor, saving it from dirt and dust. Save floor and desk top space, while keeping your computer within reach with this CPU Computer Tower Holder. Constructed with rustproof powder-coated steel for a sturdy build made to last. Easy to install. The mount securely fastens to the underside of a desk, assembly tools included. Features a width and height adjustment to fit various computer types and sizes. Specs: Height Limit: 11.8 to 21 inches. Width Limit : 3.5 to 8 Inches. Weight Limit: 22 Lbs / 10 kgs.

3.9 out of 5 stars
3.9 out of 5
45 global ratings
How are ratings calculated?
To calculate the overall star rating and percentage breakdown by star, we don’t use a simple average. Instead, our system considers things like how recent a review is and if the reviewer bought the item on Amazon. It also analyses reviews to verify trustworthiness.

Simon Tourangeau
4.0 out of 5 stars Works well, could be improved.
Reviewed in Canada on 13 May 2017
Verified Purchase
Used on a motorized elevated desk. Doesn't stay vertical when held by the top due to the weight of the PC. Also, base support should be longer so PC sits more solidly.
Read more
Report abuse

Noah
2.0 out of 5 stars Misleading and contradictory product description
Reviewed in the United States on 16 August 2017
Verified Purchase
Look. This mount is just fine, but the contradictory maximum measurements between the pictures and descriptions needs to be resolved. Unlike the pictures state (which many many people use to decide what to buy) the mount does not fit 9" wide cases and is limited to 8".

I'll be returning the mount as a result.

Terry D
4.0 out of 5 stars It works, but not quite as nicely as I'd hoped
Reviewed in the United States on 3 July 2020
Verified Purchase
So, don't be like me, and make assumptions about this bracket.
I assumed my computer weighed less than 22lbs. In fact, it weighed 23lbs, so I ended up taking a hard drive out to be sure it was under the weight limit.
I also assumed that there was PLENTY of room under my desk to mount my computer in a pleasing way. This was incorrect for 2 reasons.
1.) My computer tower was much too large to mount from the top mount with the intention of spinning it without being incredibly in the way (to give it enough room to spin)
2.) I didn't take into account that I'd want one particular side facing outwards. I could have mounted it on a different spot on my desk that would have been more out of the way, but in order to keep the accessible side facing towards me (since i couldn't spin it) the wires would have been facing towards the center of the room. That would have made it look worse because part of the reason I wanted this mount in the first place was to increase the organized appearance in my computer room.
The lesson here being, make sure you give careful though to where you'll want the computer under the desk, which side you'll want facing towards you, and whether or not there will be room to make it spin if that is your intention (get out a measuring tape and check!!)

That being said- now that I have it mounted, its mostly out of the way, and looks much better than it used too.

Next thing is the bracket itself. The slider that adjusts the height of the bracket I have an issue with. In order to adjust it, it has two ways to secure it down on ONE SIDE of the railing. THe middle of the rail has a screw that holds it on and allows it to slide up and down, but it doesn't actually support the bottom. So once you have it to the height you need, you secure it down on the one side with a hand screw and a hex screw. That means all of the weight of your computer is resting on one side of the railing. I fail to see why they couldn't have just put another hex screw or hand screw on the opposite site to share the weight on both sides of the bracket.
The next issue I have with the bracket is that depending on your computer tower height, you may not get it to fit snugly against the top and bottom. I included a picture of the top of mine, and you can see there is a gap between the computer and the bracket. I could have opted not to use the supplied rubber pads and it would have JUST fit on the next notch/hole up, but then it would have slid around all over the place. (I tried it and realized it was less secure that way). I thought there would be a way to more fine-tune the height adjustment the same way there is to fine-tune the width adjustment. Another incorrect assumption on my part.

All of that being said, however, the computer is still pretty solid in the bracket and doesn't move around despite not being gripped tightly on all sides. I don't think its going to fall out of the bracket. I'm worried since I'm right at the max capacity for the bracket that it may not have longevity but I guess I will find out (final weight after removing my drive was 21.8lbs) For the price paid, I guess its a pretty decent bracket, thus why 4 stars and not 3. If it fails anytime soon, I will update my review.

Report abuse
See all reviews
Get FREE delivery with Amazon Prime
Prime members enjoy FREE Delivery and exclusive access to movies, TV shows, music, Kindle e-books, Twitch Prime, and more.
> Get Started
Back to top
Get to Know Us
Make Money with Us
Let Us Help You
And don't forget:
© 1996-2020, Amazon.com, Inc. or its affiliates