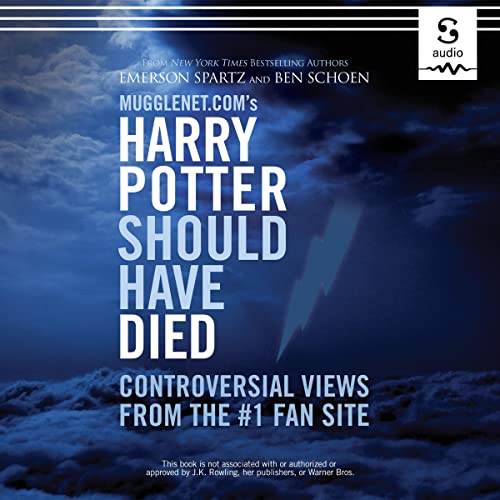 Mugglenet.Com's Harry Potter Should Have Died: Controversial Views from the #1 Fan Site

The seventh and final book is out, but fans still fiercely debate the many controversial issues left unresolved. Now, the experts at MuggleNet.com argue passionately about what really happened and what should have happened.

Switch between reading the Kindle book & listening to the Audible narration with Whispersync for Voice.
Get the Audible audiobook for the reduced price of $5.99 after you buy the Kindle book.
Learn more about membership
By completing your purchase, you agree to Audible’s Conditions Of Use and Privacy Notice.
Sold and delivered by Audible, an Amazon company
Share

4.0 out of 5 stars
4 out of 5
39 global ratings
How are ratings calculated?
To calculate the overall star rating and percentage breakdown by star, we don’t use a simple average. Instead, our system considers things like how recent a review is and if the reviewer bought the item on Amazon. It also analyses reviews to verify trustworthiness.

None3
2.0 out of 5 stars No sparks, no Spartz
Reviewed in the United Kingdom on 9 February 2011
Verified Purchase
This is an interesting book, I love mugglenet and read and re-read the previous book by Emerson Spartz & co. I received this book yesterday and finished reading it before I went to bed. It is a fun read in parts and a few of the subjects are thought provoking but others are just plain silly, I appreciate the humour but found it unnecessary. I was expecting something similar to the previous book 'What will happen in Harry Potter 7?' Without any predictions of course! I just preferred that style. This one has much too much use of the word 'cool' and I found it a little too simplistic, I expected more in depth discussions and couldn't help but be disappointed. I think I will have a look at some of the Harry Potter Essay books instead. I don't think I will need to read it again which says it all for me. I am a massive Potter fan but this just didn't quite do it for me.
Read more
2 people found this helpful
Report abuse

Amazon shopper
2.0 out of 5 stars interesting in places but also too much nonsense.
Reviewed in the United Kingdom on 2 February 2014
Verified Purchase
Some of this is good, such as the debate as to whether Harry really died or not in DH. At other times it is nonsense, such as who would be the better mother, Skeeter or Umbridge. Also, it seems to present its subjective opinion as fact, only recognising it as personal opinion in the "what is the best/worst books" debate.

Worth a read, but no way is this worth the fiver I paid for it. For 2 quid I'd have been happy.
Read more
Report abuse

Danny B.
5.0 out of 5 stars Got me thinking
Reviewed in the United Kingdom on 3 September 2013
Verified Purchase
A great book that got me thinking about questions I had never considered. It also gave me a few fresh viewpoints on questions I had previously considered. All in all, a book for any Potter fan who has sat and pondered some of the finer points if the Potter plot.
Read more
Report abuse

Jennifer
1.0 out of 5 stars Just re-read Harry Potter, skip this one.
Reviewed in the United Kingdom on 15 June 2014
Verified Purchase
Some of the debates were okay, but then there was 'would you rather kiss voldemort or a dementer?' Like, seriously, that was a genuine question. Overall alright I suppose, but I'd rather read the actual books.
Read more
Report abuse

Liam Moran
4.0 out of 5 stars Harry Potter Should NOT Have Died!
Reviewed in the United Kingdom on 16 October 2015
Verified Purchase
Expected a bit more but still a great book if you're into that stuff. Full of excellent theories and what ifs.
Read more
Report abuse
See all reviews
Back to top
Get to Know Us
Make Money with Us
Let Us Help You
And don't forget:
© 1996-2021, Amazon.com, Inc. or its affiliates