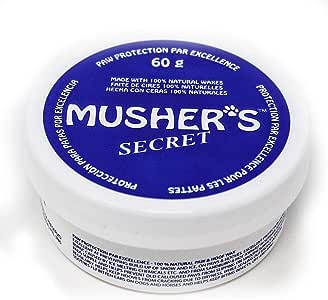 This easy-to-apply all-natural wax-based cream protects paws from harsh surfaces. Protect paws from sand, hot pavement, ice and salt with all natural 100 percent wax-based cream. When applied to pads and between toes, dries in seconds to form a semi-permeable shield. Non-toxic, non-allergenic, non-staining formula can be used weekly or as needed to prevent abrasions, burning, drying and cracking. Perfect for mushing, hunting, walking or before any outdoor activity. Acts as an invisible boot to prevent potential paw problems. Easy-to-apply formula contains vitamin E to moisturize and help heal wounds and keep paws healthy. Available in pack of 2.1-ounces. Measures 3-inch length by 3-inch width 1-1/3 height.

4.6 out of 5 stars
4.6 out of 5
9,131 global ratings
How are ratings calculated?
To calculate the overall star rating and percentage breakdown by star, we don’t use a simple average. Instead, our system considers things like how recent a review is and if the reviewer bought the item on Amazon. It also analyses reviews to verify trustworthiness.

Jenny Manville
5.0 out of 5 stars FRIED PAWS!
Reviewed in the United Kingdom on 18 August 2018
Verified Purchase
Hello, I am a 12 year old Labrador, living in Central London where you have to walk on sizzling streets to reach the parks. My dry old paws were frying on the pavements throughout the recent heatwave. My person bought me some of your wonderful product and I am pleased to say I found it most comforting and it certainly protected my paws and has made them rather soft too. My only problem is I have noticed my person applying it to her heels too, so we will be making a further purchase for the icy winter streets.
Read more
42 people found this helpful
Report abuse

Mrs. Chadwick
5.0 out of 5 stars It actually works and it's Fantasic :-)
Reviewed in the United Kingdom on 2 January 2018
Verified Purchase
I’d never heard of Musher's Secret Pet Paw Protection Wax, until my cousin recommended it as he’d used on both his dogs the previous Winter.

Therefore, I decided to buy it for my two Shetland Sheepdogs to protect their paws during the Winter, (especially when the councils use rock salt when they grit the roads).

This protects your dog’s paws from ice and salt, sand and hot pavements, (when we get a hot Summer, which is rare in this country).

It’s 100% natural wax based cream. I was nicely surprised that it’s not too greasy and has a slight fragrance, (which soon disappears).

The formula contains vitamin E, which helps to moisturize your dog’s paws, helps to heal wounds and helps to keep their paws healthy.

You’ll find it’s very easy to apply to your dog’s pads and in-between their toes, (claws), as that’s were rock salt, ice and sand can linger.

I apply this every time they go out for a walk during the Winter, even more so when there’s rock salt about as the chemical can burn in-between your dog’s toes, (claws). If it gets lodged there and penetrates their skin (as we found our last Winter), they can get a nasty sore which needs a vets attention as it can get infected, (which they need antibiotics for).

Here’s a tip, to stop your dog from even thinking about licking it’s paws after you put it on, put the mushers secret on just before you go out, (we’ve found that works), as it takes their mind of it.

Once you’ve returned from walking your dogs, wipe over their paws and in-between their toes to remove the rock salt, (ice and sand) they might have picked up on their walk. I use a sensitive baby wipe, (which are usually cheaper than dog wipes) and then I use their dog towel to dry their feet.

I’m so glad we found out about this as it really works, (was fantastic during the snow period in December last year), now I wouldn’t be without it, as it’s certainly helped to keep our dog’s paws safe during the cold weather.

Mrs M McIntosh
5.0 out of 5 stars Great for humans feet too :0)
Reviewed in the United Kingdom on 10 August 2018
Verified Purchase
I saw a vlog where someone used this on their own cracked heels due to wearing flip flops alot.
After looking at the all natural ingredients i decided to give it a go. Wow, it works so well. After years of using all sorts of heel and foot creams this is the only one that has ever worked for me.
I now use it daily to keep my feet soft and crack free, great on elbows too, have used it on hubbys dry elbows, worked really well there too.
Read more
19 people found this helpful
Report abuse

rosie_01
5.0 out of 5 stars Could it be magic?
Reviewed in the United Kingdom on 28 September 2018
Verified Purchase
My poor old mutt was quite badly lame due to the heatwave and hot pavements leaving his paws raw and cracked. I considered several options to solve the problem then saw an ad’ for Musher’s paw wax so got some, from the first application the change was dramatic, he was walking normally again and didn’t seem to be in pain anymore, after a week of applying it every couple days all the cracks and scuffs were gone and his paws are now all smooth and healed. Very happy with this and I’m sure it will come in useful during the cold frosty winter days too.
Read more
9 people found this helpful
Report abuse

I brought this for my three year old King Charles Spaniel.

Thought this product would be the saviour but has only hurt my dog!

I applied at 12pm and within 6 hours her paws where double the size, bright red and swollen so much that her toes where being push aside.

Im so glad I only applied it to the front paws and not the back.

Pictures attached are the front left paw and both the right and left bottom of the paws!

I’m angry at myself that I didn’t patch test but thought there were so many reviews and she hasn’t reacted like that to anything before so thought she would be fine!

If you are going to buy this product please patch test somewhere small and be prepared that you dog may be allergic!

Very upset at this product! And feel that package did not come with any warnings of this as a possibility.
Read more

5 people found this helpful
Report abuse
See all reviews
Get FREE delivery with Amazon Prime
Prime members enjoy FREE Delivery and exclusive access to movies, TV shows, music, Kindle e-books, Twitch Prime, and more.
> Get Started
Back to top
Get to Know Us
Make Money with Us
Let Us Help You
And don't forget:
© 1996-2020, Amazon.com, Inc. or its affiliates