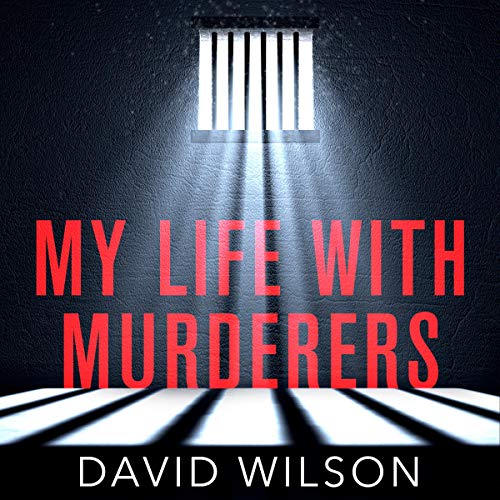 My Life with Murderers: Behind Bars with the World's Most Violent Men

Professor David Wilson has spent his professional life working with violent men - especially men who have committed murder. Aged 29 he became, at that time, the UK's youngest ever prison governor in charge of a jail, and his career since then has seen him sat across a table with all sorts of killers: sometimes in a tense interview; sometimes sharing a cup of tea (or something a little stronger); sometimes looking them in the eye to tell them that they are psychopaths.

Some of these men became David's friends; others would still love to kill him.

My Life with Murderers tells the story of David's journey from idealistic prison governor to expert criminologist and professor. With experience unlike any other, David's story is a fascinating and compelling study of human nature.

Switch between reading the Kindle book & listening to the Audible narration with Whispersync for Voice.
Get the Audible audiobook for the reduced price of $10.99 after you buy the Kindle book.
Learn more about membership
By completing your purchase, you agree to Audible’s Conditions Of Use and Privacy Notice.
Sold and delivered by Audible, an Amazon company

4.6 out of 5 stars
4.6 out of 5
493 global ratings
How are ratings calculated?
To calculate the overall star rating and percentage breakdown by star, we don’t use a simple average. Instead, our system considers things like how recent a review is and if the reviewer bought the item on Amazon. It also analyses reviews to verify trustworthiness.

Simon W. Golding
5.0 out of 5 stars A totally absorbing and powerful read!
Reviewed in the United Kingdom on 21 March 2019
Verified Purchase
This is a brilliantly written book that takes us through the darkest and disturbing minds of our most dangerous criminals. It is an extremely sensitive book, with nightmarish honesty, as we follow the remarkable life of the author; David Wilson. It has everything, as Wilson takes us on an incredible journey as a dedicated prison governor, followed by his career as a Sherlockian type criminologist and professor.
Following every flick of the page you share this rollercoaster ride and feel you are sitting next to Wilson as he interviews some of the worlds most violent psychopaths!

If you pick this book up - you will not put it down until the last page!
Read more
17 people found this helpful
Report abuse

Tylersgrandma
5.0 out of 5 stars Challenging and very thought provoking
Reviewed in the United Kingdom on 25 April 2019
Verified Purchase
This is an exceptionally excellent read. Professor Wilson made me think and re-evaluate my thoughts and opinions on murder and murderers.
I've never read anything of this type of genre - criminology - although I watch tv programmes on this. As my starting reference, I could not have chosen a better book.
If you are interested in murder academically and theoretically, this is an excellent starting point. I'm off now to look into the books Professor Wilson suggested at the end of his book.
I'm convinced this is going to be the start of a wonderful reading exploration into a fascinating subject.
Read more
14 people found this helpful
Report abuse

Michele Rumsey
5.0 out of 5 stars Powerful insightful page turner for all.
Reviewed in the United Kingdom on 31 March 2019
Verified Purchase
‘My Life with Murderers’ will take you inside the prison walls where you find yourself immersed with Britain’s most dangerous psychopaths. Nothing exaggerated, David Wilson writes with integrity and sensitivity. Covering some of the most notorious and heinous crimes, with detailed accounts of interviews with infamous murderers and other criminals, you will feel you are sitting amongst them.

On the outside you will walk in Wilson’s footsteps and follow the path behind the scenes of his research. Feeling very touched by Dunblane’s community, you visit horrific mass murder and cover the difference in that to spree murder. Wilson is unique in his approach to victim groups and touches on the vulnerability of these groups and the why…..if only crime could be tackled from this direction.

A fabulous chapter details the miscarriage of justice featuring Stefan Kiszko and his wrongful imprisonment for the murder of Lesley Molseed. Wilson details the interviews he conducted with Kiszko. Appropriately, The Reid technique of police interrogation is addressed here, and its apparent connection to other cases, for example, Brendan Dassey.

From prison riots to the unique therapeutic approach of HMP Grendon, this will most certainly broaden your mind. I appreciated the honesty when given a tragic example of how things can go horribly wrong, but in the main, this application proves to be highly successful. The proof in this being that some ex offenders, having undergone the therapeutic approach at Grendon, are now David Wilson’s good friends!

There’s something in this book for everyone, adding to the above there are other captivating details covering subjects such as, young offenders, hitmen, offender profiling and Wilson’s life as a university criminology professor. You will also encounter how he puts his theory into practice, with his award winning documentary ‘Interview with a Murderer’. However, it is not all dark and disturbing, there are some light relief moments, you may have a wry smile at David Wilson’s humour at times. Also, don’t be at all surprised if you find yourself subconsciously taking the Hare Psychopathy Checklist Test!

I’m a prolific reader of true crime literature and I would highly recommend this book. If you are a student embarking on criminology or psychology, you cannot go wrong with this insight. One doesn’t necessarily need to have an academic interest in criminology or psychology to enjoy this book. ‘My Life with Murderers’ is a powerful, insightful page turner for absolutely anyone.
Read more
12 people found this helpful
Report abuse

ian
5.0 out of 5 stars A very good book.......
Reviewed in the United Kingdom on 21 August 2020
Verified Purchase
This is the story of a mans journey from idealistic prison governor, at a young age through to his work as a criminologist, specialising in murderers. He tells us a number of interviews with some truly awful people like Dennis Nilsen., one of Britains worst serial killers.

We learn what a psycopath really is and the fact that there are lots out in society.He also tells usabout his days as governor of HMP Grendon, which is actually Britains only therapeutic prison, where the majority of inmates are sex offenders.It apparently has a lower reconviction rate than other jails.

BB
5.0 out of 5 stars Highly recommended
Reviewed in the United Kingdom on 10 July 2021
Verified Purchase
I have worked with ( mostly) men convicted of violent and sexual offences for much of my career, although not at length with any murderers, and I felt engaged with every paragraph in this book. A little more on how criminal justice has been a political football would have pleased me but I realise that’s not the thrust of the book. Very clear, able to put across theory and what it means in practice and the value and risk in working to help people change. David tells his own story throughout as well but more as a backdrop to explain his involvement with the various men he has known and worked with.
David thought that the Carl Bridgwater murder might have been largely forgotten in his chapter on the suspected perpetrator. Carl was about three weeks younger than me and the murder was relatively local, I remember the local news reports and information wanted posters outside my school gates. So, not totally forgotten by me although David’s award winning documentary about it had completely passed me by and maybe something I need to catch up on. Sad that all these years on minds have never really been put to rest.
It is, I think, an interesting book and well worth a read and at times debunks some of the more popular media and political ideas about criminal justice and violent men.
Read more
Report abuse
See all reviews