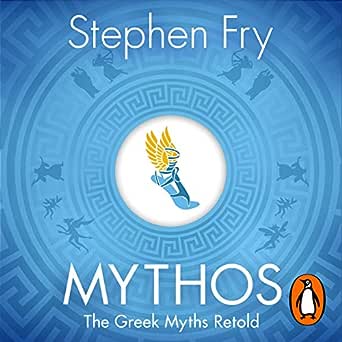 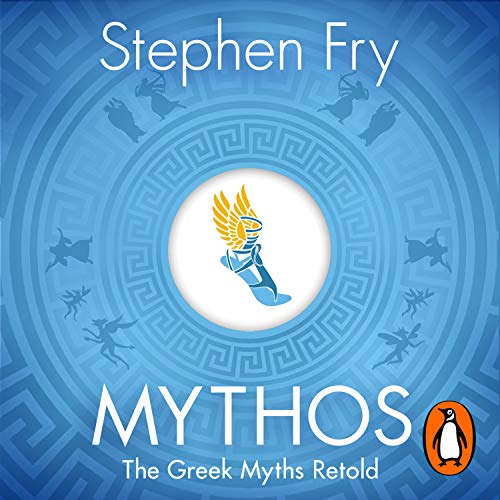 4.6 out of 5 stars
4.6 out of 5
4,412 global ratings
How are ratings calculated?
To calculate the overall star rating and percentage breakdown by star, we don’t use a simple average. Instead, our system considers things like how recent a review is and if the reviewer bought the item on Amazon. It also analyses reviews to verify trustworthiness.

Inman
5.0 out of 5 stars Stephen Fry is a wonderful storyteller!
Reviewed in Australia on 4 May 2019
Verified Purchase
Stephen Fry is a wonderful storyteller and has a delightful voice bringing the Greek myths to life. I thoroughly enjoyed Mythos and learnt new things about the Greek myths that I did not know. I have just purchased the audio version of Heroes, Stephen's newest book on Ancient Greek mythology and I am looking forward to hearing it, and I am sure it will be as enjoyable as Mythos.
Read more
One person found this helpful
Helpful
Comment Report abuse

Nate
5.0 out of 5 stars Humour + Greek mythology = Mythos
Reviewed in Australia on 8 February 2019
Verified Purchase
Take Stephen Fry's dry humour, and combine it with his fascination of Greek mythology, and this book is the final product. This is the type of book that I know i will read again, and I look forward to reading again, as it was so well written.
Read more
3 people found this helpful
Helpful
Comment Report abuse

NT
5.0 out of 5 stars It's all Greek to me - and that's not a bad thing
Reviewed in Australia on 7 January 2019
Verified Purchase
Stephen Fry retells the Greek myths in an appealing and approachable way, much as an avuncular uncle might school his nephews.

A cracking read and a great introduction to further thoughts upon the tales within.

Amanda Derham
5.0 out of 5 stars Engaging, enthralling and informing
Reviewed in Australia on 6 July 2019
Verified Purchase
Imaginative retelling of Classical Greek myths by Steven Frey make the stories accessing and memorable. Thoughtful footnotes illuminate the story and references to historians and literary greats, such as Ovid, Shakespeare and Byron, make the book a treasure trove for the interested amateur.
Read more
Helpful
Comment Report abuse

Michelle Birkette
5.0 out of 5 stars A pleasure to listen to. Good stories too.
Reviewed in Australia on 14 May 2019
Verified Purchase
As usual, listening to Steven Fry narrate an audiobook is a pleasure—and it’s so easy to listen to the Greek myths when told with a modern voice and modern language.
Read more
Helpful
Comment Report abuse

Miss Thommo
5.0 out of 5 stars Filled the Gaps with giggles.
Reviewed in Australia on 9 April 2019
Verified Purchase
A fun and funny light hearted retelling of the greek myths from start to end. I thoroughly enjoyed dipping into this book and reading both the stories I know and those less well known to me. It filled in the gaps of my classical education and made sense of the Greek pantheon.
Read more
Helpful
Comment Report abuse
See all reviews

D. Lye
1.0 out of 5 stars Go back to the originals
Reviewed in the United Kingdom on 5 November 2018
Verified Purchase
A real disappointment, especially from a writer as good and witty as Stephen Fry. This is twee, patronising, and feels as if it was written in a hurry to meet a publisher's deadline. Fry's efforts to make these great myths seem more modern and relevant read like a trendy vicar trying to "hang out" with the kids in his parish.
Read more
144 people found this helpful
Report abuse

Amazon Customer
5.0 out of 5 stars Fry's Greek Delight
Reviewed in the United Kingdom on 20 November 2018
Verified Purchase
An entertaining and interesting book about ancient Greek mythology written in a style that is recognisable as Stephen Fry (if you've ever watched him on QI). Originally, I had been looking for a book on ancient Greek mythology that was written in a modern way and would be both easy to understand and fluid and I think this book fulfilled those criteria. I had read books on Ulysses (Odysseus I think he's also known as), Theseus, Hercules, Jason and the Argonauts and Perseus as well as seeing a few films about said characters (although they are not really covered in this book because as Fry mentions you would need several books to tell their stories) and so wanted to find a book that tells other myths such as the creation of the Greek Gods, the Titans and some of the less well known characters in Greek myth such as Prometheus, Sisyphus, Persephone, but because I am not a classics scholar I didn't really feel that I would particularly enjoy reading translated ancient texts so this book was just about right and ideal for what I wanted.
Fry does use some complicated words (although he'd probably recommend I use a dictionary) but I still found this to be, on the whole, easily understandable, a great read and it ticked all the boxes for what I was looking for. Fry's writing style is (as I'd imagine the man himself to be) charming, intelligent and informative with a sense of wit and of course there are plenty of footnotes as he adds extra bits of information as he tells the stories. Also, he does add a sources section at the end of the book for those who wish to delve further which I think is an excellent idea.
I would recommend this book to anyone who has an interest about ancient Greek mythology (although not sure if it's ideal for children), especially if you want to learn about the Greek Gods, the Titans and the many myths and stories associated with them but rather than using this as a definitive guide it should be seen as an entry point to a fascinating subject.

Amazon Customer
3.0 out of 5 stars A fun read but needs an index!
Reviewed in the United Kingdom on 4 May 2018
Verified Purchase
This book is written in an accessible, user-friendly way (I am a complete beginner with Greek mythology!) but there are a few omissions which would make it much more easy to read:
An INDEX of characters
A more extensive diagram of how the hundreds of characters are related to eachother
A glossary.
I also thought that the last few chapters are slightly disorganised.
There are a few typo's and duplications as well, giving the impression it was thrown together at the last minute.
I hope the author and publisher take this into consideration for future editions.

Kev Ramsay
4.0 out of 5 stars Interesting for many reasons, that anyone will enjoy
Reviewed in the United Kingdom on 22 September 2018
Verified Purchase
Really enjoyed reading this book. It wasn't what I was after but I liked it all the same. I read the Illiad and the Odyssey and really loved the style of writing and the exciting story lines. This book is more an exposé of the many Greek gods, but written by Steven Fry in his own inimitable way. Ancient myths written in modern language.
Its interesting and enjoyable and does a good jobs of put as much as possible together in a single book without ever making you feel this it is study material for an exam.
I'd definitely recommend
Read more
42 people found this helpful
Report abuse

Cj81
4.0 out of 5 stars Myths Busted !!!
Reviewed in the United Kingdom on 8 February 2019
Verified Purchase
Okay so being a massive fan of Greek mythology and the like this caught my eye on here on my recommendations home page so I purchased and wasn't disappointed. Although not very over the top exciting I just couldn't put it down reading the exploits of Zeus and His wife Hera. Stephen Fry is very eloquent with his wording as the man's posh himself. Haha. A canny read so give it a go. Each to their own opinion and the world won't end if you don't like it. 😊
Read more

22 people found this helpful
Report abuse
See all reviews
Get FREE delivery with Amazon Prime
Prime members enjoy FREE Delivery and exclusive access to movies, TV shows, music, Kindle e-books, Twitch Prime, and more.
> Get Started
Back to top
Get to Know Us
Make Money with Us
Let Us Help You
And don't forget:
© 1996-2020, Amazon.com, Inc. or its affiliates