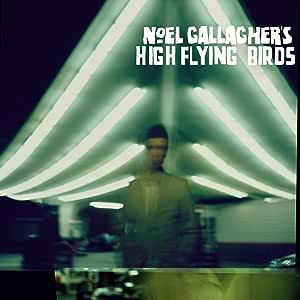 Noel Gallaghers High Flying Birds Only As Domestic Is Deleted

UK vinyl LP pressing. 2011 release, the debut solo album from the former Oasis songwriter and guitarist. .As leader of Oasis since the band's inception in 1993, Noel Gallagher was at the helm for their global success, from the launch of their first indie UK singles in 1994 to their final shows together in the summer of 2009. Over the course of their seven consecutive #1 studio albums, Oasis sold over 70 million records worldwide and charted 22 consecutive Top 10 UK hits from 1995 to 2008 (including eight #1's), creating an astounding historical record.

4.6 out of 5 stars
4.6 out of 5
1,066 global ratings
How are ratings calculated?
To calculate the overall star rating and percentage breakdown by star, we don’t use a simple average. Instead, our system considers things like how recent a review is and if the reviewer bought the item on Amazon. It also analyses reviews to verify trustworthiness.

Amazon Customer
5.0 out of 5 stars Noel has produced a wall of sound album
Reviewed in Australia on 29 March 2019
Verified Purchase
Classic sound and a really has an Oasis ring to it
Read more
Helpful
Report abuse
See all reviews

Jonathan M
3.0 out of 5 stars Simple Game of Stop the clocks
Reviewed in the United Kingdom on 13 March 2014
Verified Purchase
I was not sure what to expect from Noel Gallaghers first album.
Since its release I have realized his first two albums were indeed meant to be something slightly different.

This record finally shows Stop the Clocks and Record Machine as album songs.
Not sure about some of the others, where as The Good Rebel, Simple Game of Genius and Lord shine a light on me, and Alone on a Rope all were left off in favor of more conservative type songs.

Apart from Stop the Clocks and Live in a dream, record machine, this album is not really anything you have not heard before.
I am not saying he HAD to do that album with Amphormous and Androgynous but heavens he could turn the guitars up a bit.
For his second album at least he revived an old Oasis song which had guitar riffs and a bit of upbeat-ness to it but this album, its nothing really incredible, its just the same old Noel Gallagher you have heard before or Oasis.

And that is fine I guess, but it is not really an experimental album, its kind of the same thing they or Noel have been doing since that Don't Believe the truth album. Let it be said, this record is no Be Here Now or Morning Glory.
Maybe it was Oasis's 97 and 2000 albums that put Noel off trying new things again after the reception it got.

But Noels songs have improved in vibe and spirit since then so...why not try new things?
I certainly think Noel would of benefited from A and A's influence and pushing the limits more. But in truth this just sounds like Noel getting warmed up for something else, with the exception of 2 songs.

Perhaps Noel is not worried about being the biggest or best anymore, he was the biggest and best for a while or a few years.
Time will tell whether he will try for new things eventually. There is nothing wrong with the typical Oasis sound but time moves on and you have to do something different.
Read more
3 people found this helpful
Report abuse

Ricky
4.0 out of 5 stars Stunned that something so simple can be so good
Reviewed in the United Kingdom on 15 November 2017
Verified Purchase
A good collection of Oasis-style singalong ditties with the overall standard matching a good Oasis album. There can't be a decent Beatles song left that NG has not filched from wholesale. His voice is not as strong nor distinctive as LG's, but it's suited to his songs here. Very likeable, which is surely the point.
Read more
3 people found this helpful
Report abuse

Blode
5.0 out of 5 stars there's pretty much no distortion on this album
Reviewed in the United Kingdom on 21 November 2015
Verified Purchase
First time I heard anything from this album was when Noel did T in the Park earlier this year...can't believe I missed out on this gem of an album! I don't think it's as edgy or rocky as his Oasis stuff and I reckon it's more mellow and similar to late era Oasis...more specifically DBTT...there's pretty much no distortion on this album...but that's not to take anything away from it...it's grandeur...it's got this massive wall of sound...everything is there...Noel is a craftsman and he creates a magnificent sound here that will get you hooked...everything about this album sounds 'big' and 'epic'...I enjoyed and got addicted to this album in mid 2015...every song for me is a hit...but noteworthy songs are Everybody's On The Run, The Death of You And Me, AKA What A Life.
Read more
2 people found this helpful
Report abuse

Film and music appreciator
5.0 out of 5 stars Satisfying first album from Noel
Reviewed in the United Kingdom on 20 November 2011
Verified Purchase
I have lived with the album for a while and happy to report I love it! Granted I'm biased to an extent because I like Noel's work as chief songwriter in Oasis, and have grown increasingly impressed with his ever maturing soulful vocals. This has come to full fruition on the album which kicks off in a very bold way with Everybody's On The Run, a tune I first heard from a sound check in 2009 and seems to have been given the treatment it deserved with an orchestra and choir (what else?), and big drums, and guitar. It's also a cool way to start an album rather than leave it until the end. I like all of the first 6 tracks best through to Aka What A Life, which has been all over the radio. Definitely one to strut your funky stuff on the dance floor. Uncle Noel would be proud! .. And then the fabled Stop The Clocks ends the album in style. I say fabled because its been around since 2001 and could have been on any of thee last 3 or 4 Oasis albums since then, and finally gets its place on here. On a nerdy note, of special interest is the production from David Sardy who I understand added some ambience to the tunes and really helps elevate a lot them to a whole new level. I believe he also had the drums re-done after Noel originally took on the reigns of production early on in the process. Finally there are other tunes worth checking out which for one reason or another didn't get on the album, but are available on either iTunes, or available as b-sides. The songs Simple Game of Genius and Let The Lord Shine A Light On Me are both amazing, and at least one of these could have easily fit somewhere. Other songs not to feature on this are Alone on a Rope (v good mid-tempo soulful tune), The Good Rebel and I'd Pick You Every Time (folky).
Read more
6 people found this helpful
Report abuse

Koos
3.0 out of 5 stars just cool and fine
Reviewed in the United Kingdom on 2 January 2014
Verified Purchase
Liking most of the Oasis records very much, I can't help not being totally overwhelmed by Noel Gallagher his solodebut. I know the record has been well received. I do know that the record ended up in a lot of English 'best of the year' lists.

The thing is: I do like the two singles "Aka... What a life" and "If I had a Gun" very much. But the other songs are just cool and fine, nothing more, nothing less. Afther I have listen to the record a few times during the last months I can help to notice that some of the songs sound a little bit the same and could have used a sharper edge. The feeling 'I have heard it before' came a little bit too soon. Somehow I miss his brother's vocals on the songs (whereas I miss Noel his guitarplaying and cords on the Beady Eye songs).
Read more
4 people found this helpful
Report abuse
See all reviews
Back to top
Get to Know Us
Make Money with Us
Let Us Help You
And don't forget:
© 1996-2021, Amazon.com, Inc. or its affiliates