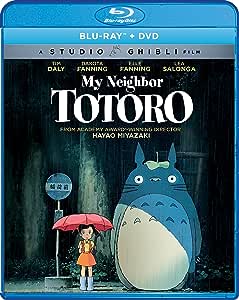 From the legendary Studio Ghibli, creators of Spirited Away and Ponyo, and Academy Award-winning director Hayao Miyazaki, comes a classic tale of magic and adventure for the whole family.


When Satsuki and her sister Mei move with their father to a new home in the countryside, they find country life is not as simple as it seems. They soon discover that the house and nearby woods are full of strange and delightful creatures, including a gigantic but gentle forest spirit called Totoro, who can only be seen by children. Totoro and his friends introduce the girls to a series of adventures, including a ride aboard the extraordinary Cat Bus, in this all-ages animated masterpiece featuring the voices of Tim Daly, Lea Salonga, and real-life sisters Dakota and Elle Fanning, in one of their earliest roles.

4.9 out of 5 stars
4.9 out of 5
5,287 global ratings
How are ratings calculated?
To calculate the overall star rating and percentage breakdown by star, we don’t use a simple average. Instead, our system considers things like how recent a review is and if the reviewer bought the item on Amazon. It also analyses reviews to verify trustworthiness.

mariana m freeman (mark freeman)
5.0 out of 5 stars my neighbour TOTORO
Reviewed in the United Kingdom on 3 December 2012
Verified Purchase
This was the best out of the Ghibli studio in my opinion, was a very moving story about the plight of the two sisters and their father who move into a new area and as their mother is in hospital, there is quite a lot going on with their lives .I found the story could be fun as well as sad at times with the three of them having to work out without their mum, the two girls meet the TOTORO god and is the most moving and fun gibli film i have seen and also the animation was amazing so much detail, also i watched this in the English and then the Japanese version and both were great to watch as each other .hope you enjoy this as much as i did .
Read more
Report abuse

Lepus Aquaticus
4.0 out of 5 stars Big, Furry, Supernatural Creature Befriends 2 Little Girls
Reviewed in Canada on 14 September 2018
Verified Purchase
I've screened this Anime before--several times--in rental. For me, it's one of the best choices of "Japan-imation" films, to serve as a "late-Sunday-evening", feel-good, winding-down the Week movie. It's a fantasy: 2 kids--the preschooler first, then the elementary-school aged older sister--encounter a "Forest Spirit" in the form of the large, furry, bear-like Totoro. It just so happens there's a picture of a furry, not very dangerous-looking ogre--an awful lot like Totoro--in the younger daughter's illustrated story-book... ;-)

The story--like all good Sci-Fi & Fantasy--originates & is (somewhat) grounded in reality. The Kusakabes: elementary-school aged daughter Sasakai, pre-school aged (can't wait to grow up) daughter Mei & university professor (Anthropology?) Dad; are moving to an empty cottage in the forested, agricultural hinterland of some city. They seem to have relocated so as to be closer to Mom, who's nearby in hospital. I'm thinking T.B.--but, as story's told from kids' perspective--viewers never know what's up with that.

One afternoon--while academician Dad's marking papers, or working @ home, on his next book--Mei connects with 2 sprightly, big-eared, um, creatures. Turns out, creatures are part of a group--headed by the huge, bear-like Totoro--who live in a nearby, ancient Camphor-Tree. Totoro sleeps a lot, plays the ocarina--or some basic woodwind instrument--@ night & occasionally provokes gale-force winds. "Mr. T" & his much smaller fellow spirits, seem to be addicted to acorns & use these to forge a bond with the girls.

The overall story-arc is kind of mild--yet edgy in places--& as convoluted as any contemporary adult-film. It bespeaks a misty-eyed society, of indeterminate era (post-WWII? ), where motor-tricycles are used for hauling cargo , personal computers are unknown, even telephones aren't ubiquitous & many folks commute by train & bus. That includes the titular Totoro--who patronizes a VERY unique, decidedly other-worldly, transit system--the cat-bus...Yeah, seriously... I give these animators 1-3/4 thumbs up. for originality. ;-)

The animators jump the viewer into the eerie World of the Nature-Spirits, in several easy steps & (interestingly!) Dad is there, to legitimize Mei's "first contact"-- with Totoro & his little friends--by not judging, or disparaging #2 Daughter's experience. Far from it; Dad aids his kids in dealing with Totoro, by relating old Japanese legends & talking his daughters through a short "Spirit-befriending" ceremony. The kids' involvement with the spirits deepens from there.

In the end, Totoro gets to be the nominal hero--resolving a family crisis, provoked by the precocious, yet insecure Mei. The overall message of this flic--actually very much a kid's film--is that the World: be it the Natural World, Academia or Human social World, isn't as scary as kids might think & kids viewing this film will be left feeling it can be fun--"out there".
Read more
5 people found this helpful
Report abuse

chaztoronto: ForWhatItsWorth.
5.0 out of 5 stars Finally a superior quality version of this classic film!
Reviewed in Canada on 29 November 2017
Verified Purchase
First bought the DVD some years ago, then later purchased the Disney blu-ray, now I own this GKIDS blu-ray release and I can tell you it's the BEST version yet, because this is the high-definition transfer, together (!) with the original English-dubbed voices of Dakota and Elle Fanning.
I have viewed this film many times in its original Japanese audio but the English dubbed voices is for lack of a better word, Outstanding!
Miyazaki at his best story-telling, and subsequent kudos to Studio Ghibli for giving us these brilliant transfers
My Neighbor Totoro [Blu-ray + DVD] (Sous-titres français)
Read more
6 people found this helpful
Report abuse
See all reviews
Get FREE delivery with Amazon Prime
Prime members enjoy FREE Delivery and exclusive access to movies, TV shows, music, Kindle e-books, Twitch Prime, and more.
> Get Started
Back to top
Get to Know Us
Make Money with Us
Let Us Help You
And don't forget:
© 1996-2020, Amazon.com, Inc. or its affiliates