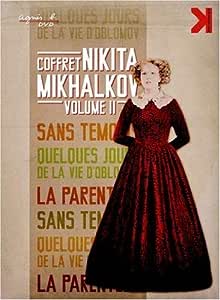 France released, PAL/Region 2 DVD: LANGUAGES: Russian ( Mono ), English ( Subtitles ), French ( Subtitles ), SPECIAL FEATURES: 3-DVD Set, Cast/Crew Interview(s), Interactive Menu, Scene Access, SYNOPSIS: A Few Days from the Life of I.I. Oblomov (1980) St. Petersburg, mid 19th century: the indolent, middle-aged Oblomov lives in a flat with his older servant, Zakhar. He sleeps much of the day, dreaming of his childhood on his parents' estate. His boyhood companion, Stoltz, now an energetic and successful businessman, adds Oblomov to his circle whenever he's in the city, and Oblomov's life changes when Stoltz introduces him to Olga, lovely and cultured. When Stoltz leaves for several months, Oblomov takes a country house near Olga's, and she determines to change him: to turn him into a man of society, action, and culture. Soon, Olga and Oblomov are in love; but where, in the triangle, does that leave Stoltz? Relatives (1981) Intended as a satire on the urban/rural dichotomies in Russia, the film features Nonna Mordyukova as Maria Konovalova, a grandmother who is left to continue living on her own in the countryside when her daughter and family move to the big city of Moscow. Unnerved at being left alone and curious about what the urban attraction is anyway, Maria travels to her daughter's place and stays on for awhile. She sticks her unwanted nose into everyone's business -- daughter's, granddaughter's, ex-husband's, son-in-law's, and neighbors' too. By the time the meddlesome woman has alienated everyone around her (no wonder her family left), she realizes what she has done and bids a sniffling farewell as she heads to the train station and home -- but her family cannot leave it at that and decides to...Nikita Mikhalkov - Volume Two - 3-DVD Set ( Neskolko dney iz zhizni I.I. Oblomova / Rodnya / Bez svideteley ) ( A Few Days from the Life of I.I. Oblomov / Relatives / Without Witnesses )

4.3 out of 5 stars
4.3 out of 5
2 global ratings
How are ratings calculated?
To calculate the overall star rating and percentage breakdown by star, we don’t use a simple average. Instead, our system considers things like how recent a review is and if the reviewer bought the item on Amazon. It also analyses reviews to verify trustworthiness.

Read more
17 people found this helpful
Report abuse
Translate review to English
See all reviews
Get FREE delivery with Amazon Prime
Prime members enjoy FREE Delivery and exclusive access to movies, TV shows, music, Kindle e-books, Twitch Prime, and more.
> Get Started
Back to top
Get to Know Us
Make Money with Us
Let Us Help You
And don't forget:
© 1996-2020, Amazon.com, Inc. or its affiliates