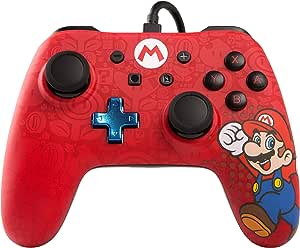 Brand: Power A
Platform : Nintendo Switch
4.4 out of 5 stars 1,453 ratings
Available from these sellers.

The “Mario” Edition Controller for Nintendo Switch features the star of the Mushroom Kingdom! This traditional-style controller is officially licensed by Nintendo, featuring a soft-touch finish and an 8ft removable USB cable for quick response time and plenty of playing room.

4.4 out of 5 stars
4.4 out of 5
1,453 global ratings
How are ratings calculated?
To calculate the overall star rating and percentage breakdown by star, we don’t use a simple average. Instead, our system considers things like how recent a review is and if the reviewer bought the item on Amazon. It also analyses reviews to verify trustworthiness.

Geddyboy
2.0 out of 5 stars Great look and feel, but the drift.
Reviewed in the United Kingdom on 28 April 2020
Colour: LinkSize Name: Wired Nintendo Switch ControllerVerified Purchase
I bought this as a substitute for my nephew and liked the look and feel of it so much, I decided to use it myself.

I recently bought animal crossing and decided instead of handheld, I'd just hook it up to my monitor and could freely flick between switch and my PC.

I've gotten very light use out of the controller, I'd say maybe 50 hours of gameplay and the left stock's drift is unbelievable. I push it left and my character goes right o.O I thought maybe it's just a calibration issue, so I go to calibrate the sticks and it does in fact show pushing the stick to the left causes it to go right, yet pushing it to the right is perfectly normal.

I like the look of this controller and the feel since I have considerably large hands. But 50 hours of gameplay is ludicrous. If it was a years of gameplay I'd understand but not light, casual playing for 30-50 mins not even daily. Its left me disappointed because I was initially pleased with the investment.
Read more
3 people found this helpful
Report abuse

Amazon Customer
3.0 out of 5 stars Reasonable pad, reasonable price.
Reviewed in the United Kingdom on 4 August 2019
Colour: LinkSize Name: Wired Nintendo Switch ControllerVerified Purchase
At its price point, this controller is an easy purchase.
Not officially made by Nintendo, so the quality is not as polished as you could expect from a 1st party peripheral.
in the hands, the fit is comfortable, very similar to the original Xbox 360 in size and shape, but has a distinct lack of weightiness to it.

The thumbsticks appear to be its least hardwearing feature, made with a cheap rubber and lacking a dog nose texture that would be expected. It feels like prolonged use will wear the rubber out and it would become slippy.
The quality of the designs printed onto the controller is very good, no issues on the designs, they are well coloured and a great addition.

There is no motion control, and no amiibo functionality, these functions are exclusive to the official Nintendo Pro Controller.

Looking at the finish on the surface, the print, and indeed the entire plastic body is a smooth matte texture, not glossy like a PS4 controller.

The face buttons are pretty standard, there is no real weight to them, a light press will fully activate them all. It's worth noting none of the buttons have a premium feel to them.
The D-Pad is full smooth gloss in comparison to all other buttons being a matte texture.

Included with the pad is a ludicrously long 8 foot USB 2.0 to USB Micro B cable that can only be used with the Switch in its dock via one of the USB ports.
The shape of the cable that terminates into the controller is shaped in such a way that only that specific cable can be used for that controller, even though the cable itself is a standard format (most Android, Amazon tables use this same cable to charge etc).

My final thoughts are that its a good controller for light, casual use for the average Switch users, the addition of a variety of designs offer some great customisation and personalisation.

I mark it down for its lightweight feel, and lackluster thumbsticks. With additional marks removed due to its restriction on using only one specific cable for the controller. (For me personally, my Switch is about 2 feet away from my Monitor, and my chair, so I would rather just use a much smaller cable, and not have the extra 6ft being run over my chairs wheels all the time.
Read more
4 people found this helpful
Report abuse

andr3w77
2.0 out of 5 stars Left joycon moves to the right on its own
Reviewed in the United Kingdom on 22 June 2020
Colour: MarioSize Name: Wired Nintendo Switch ControllerVerified Purchase
Initially I thought the controller was pretty good, but after a few months of infrequent use I noticed the "steering" left thumbstick moves to the right by itself.

Did not expect this to happen so soon maybe after many months of playing not many hours.
Read more
One person found this helpful
Report abuse
See all reviews
Get FREE delivery with Amazon Prime
Prime members enjoy FREE Delivery and exclusive access to movies, TV shows, music, Kindle e-books, Twitch Prime, and more.
> Get Started
Back to top
Get to Know Us
Make Money with Us
Let Us Help You
And don't forget:
© 1996-2020, Amazon.com, Inc. or its affiliates