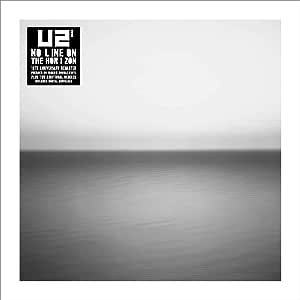 No Line On The Horizon

4.4 out of 5 stars
4.4 out of 5
600 global ratings
How are ratings calculated?
To calculate the overall star rating and percentage breakdown by star, we don’t use a simple average. Instead, our system considers things like how recent a review is and if the reviewer bought the item on Amazon. It also analyses reviews to verify trustworthiness.

BONNIE
2.0 out of 5 stars Badly packaged
Reviewed in Australia on 4 November 2020
Verified Purchase
I am reviewing the vinyl of U2 “No Line on the Horizon” (10th anniversary remaster). Vinyl record sounds good, but the record (plus other I ordered) were badly packaged and caused damage to the corner of the U2 sleeve as per picture. The records inside the box have barely or no protection at all except for a piece of crumpled paper.
Read more

Gary Oakes
5.0 out of 5 stars U2
Reviewed in Australia on 4 May 2019
Verified Purchase
Interesting
Read more
Helpful
Report abuse
See all reviews

The Punk Panther
4.0 out of 5 stars Get on your boots...
Reviewed in the United Kingdom on 20 June 2018
Verified Purchase
Funny things, U2 albums. They come out every four years or so, ten to thirteen tracks or so of stodgy, somewhat muffled, metallic, thrashy stuff with that instantly recognisable drum sound and bass line underpinning The Edge’s searing guitar parts while Bono wails on about mobile phones, ATM machines, passwords and other huge problems that “modern, global life” brings. Every track around four to five minutes in length. That is the formula then, a formula that, I have to admit, means that while I bought this album in 2009, I haven’t listened to it properly until today, nearly ten years later!

I like it in many ways. Taken individually, a lot of the tracks are impressive. Despite many people appearing to disagree, “Unknown Caller” is a favourite of mine, and similarly, I enjoy the “Subterranean Homesick Blues” feel of “Get On Your Boots”. The title track is instantly accessible, as is “I’ll Go Crazy If I Don’t Go Crazy Tonight” and “Stand Up Comedy” has a killer riff. “Fez” is interesting with its echoes of David Bowie’s “Berlin” phase. “White As Snow” is rather beautiful. “Breathe” has a staccato feel and a nice keyboard/guitar interplay with a good hook chorussy bit. Bono does go on about a “Ju Ju Man” and Chinese stocks and shares and Asian viruses” in a paranoid Paul Simon-esque lyric though. I do like this one, however. “Cedars Of Lebanon” is one if those classic sparse bass and drum backed U2 slow burners to end things off, for the next four years. A very evocative song though.

I have to admit to enjoying it, surprisingly, when giving it my full attention. Although there is a “same-iness” to listening to it in full, the stodgy feel I mentioned earlier, there is a way it just sort of insinuates itself into your consciousness. Dear me, I am beginning to sound like Bono.

I guess my main point is that it is easy to dismiss these later period U2 albums as lazy product from multi-millionaires whose mojo left them long ago. Not so. Give it a chance, as I did, however late. It is a good album. Maybe in a few years, I’ll listen to “Songs Of Innocence”.

Paul Franklin
5.0 out of 5 stars U2 can go to audio heaven
Reviewed in the United Kingdom on 16 November 2017
Verified Purchase
Fabulous music on the most authentic medium - how could I give less than 5 ***** ?
U2 at their best, plus a very clean pressing, is all any vinyl-head could ask for.
Read more
One person found this helpful
Report abuse

Eddie
5.0 out of 5 stars Amazing sound quality
Reviewed in the United Kingdom on 27 May 2019
Verified Purchase
The sound is amazing!
Read more
Report abuse

Hopper
5.0 out of 5 stars No Line On The Horizon (Box Set)
Reviewed in the United Kingdom on 7 September 2019
Verified Purchase
I like the DVD and the CD this is rated
FSK ab 0 freigeben.
I like it it was very good and so nice.
Thanks Amazon.
Read more
Report abuse
See all reviews
Get FREE delivery with Amazon Prime
Prime members enjoy FREE Delivery and exclusive access to movies, TV shows, music, Kindle e-books, Twitch Prime, and more.
> Get Started
Back to top
Get to Know Us
Make Money with Us
Let Us Help You
And don't forget:
© 1996-2020, Amazon.com, Inc. or its affiliates