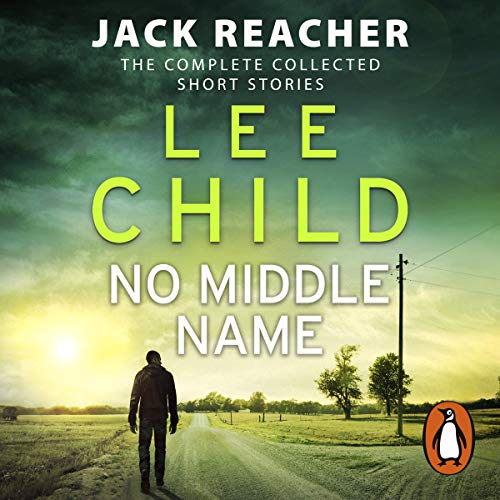 Jack 'No Middle Name' Reacher, lone wolf, knight errant, ex-military cop, lover of women, scourge of the wicked and righter of wrongs, is the most iconic hero for our age. This is the first time all Lee Child's shorter fiction featuring Jack Reacher has been collected into one volume. A brand-new novella, Too Much Time, is included, as are those previously published only in ebook form: Second Son, James Penney's New Identity, Guy Walks into a Bar, Deep Down, High Heat, Not a Drill and Small Wars. Added to these is every other Reacher short story that Child has written: 'Everyone Talks', 'Maybe They Have a Tradition', 'No Room at the Motel' and 'The Picture of the Lonely Diner'. Together, these 12 stories shed new light on Reacher's past, illuminating how he grew up and developed into the wandering avenger who has captured the imagination of millions around the world.

Switch between reading the Kindle book & listening to the Audible narration with Whispersync for Voice.
Get the Audible audiobook for the reduced price of $34.34 after you buy the Kindle book.
Learn more about membership
By completing your purchase, you agree to Audible’s Conditions Of Use and Privacy Notice.
Sold and delivered by Audible, an Amazon company

4.5 out of 5 stars
4.5 out of 5
6,327 global ratings
How are ratings calculated?
To calculate the overall star rating and percentage breakdown by star, we don’t use a simple average. Instead, our system considers things like how recent a review is and if the reviewer bought the item on Amazon. It also analyses reviews to verify trustworthiness.

Simon
5.0 out of 5 stars Just do yourself a favor, read these stories!
Reviewed in Australia on 11 November 2019
Verified Purchase
Jack Reacher, Lee Child, what more do you need to know!?

If you’ve read Jack No Middle Name Reacher stories before, you don’t need to be told how good these stories are. These are NO exception.

If you HAVEN’T read one yet, where have you been? What have you been reading? Why are you even reading this review? Get into them, get started and once you do you’ll be as completely hooked, entertained, satisfied and delighted as the millions who already have had this experience.

Arthur Hanlon
4.0 out of 5 stars Early Jack, late Jack
Reviewed in Australia on 26 September 2018
Verified Purchase
Reading about a hero as a boy when you've already read extensively about him through many adult adventures is a challenge, and that's the only one of these otherwise excellent Reacher stories that fails. In this particularly one, we have 13-year-old Jack taking wise actions and making wise decisions with adults almost bowing before him. Other than this, it's classic Reacher and well worth a read.
Read more
Helpful
Report abuse

Chapey
5.0 out of 5 stars Typical Jack Reacher
Reviewed in Australia on 6 August 2021
Verified Purchase
As usual this is typical Jack Reacher. Read a little and then can't put it down.
Read more
Helpful
Report abuse

Bill McAlpine
3.0 out of 5 stars Reacher didn't reach
Reviewed in Australia on 26 July 2017
Verified Purchase
Started off well but deteriorated from the second one on. Stories came across as incomplete but I must admit that they gave me an insight into the character of Jack Reacher.
Read more
2 people found this helpful
Helpful
Report abuse

KEN POWER
4.0 out of 5 stars Have read all the others so short stories are all there is left to read !
Reviewed in Australia on 21 December 2020
Verified Purchase
Well worth a read if you enjoy Reacher stories.
Read more
Helpful
Report abuse

graeme
5.0 out of 5 stars Big Jack Reacher
Reviewed in Australia on 18 June 2017
Verified Purchase
I'm a Lee Child junkie so yes I enjoyed No Middle Name and would recommend it to anyone who is interested in fast paced action, Jack Reacher style.
Read more
One person found this helpful
Helpful
Report abuse

Rosin Russell Connolly
5.0 out of 5 stars Great collection of quick reads.
Reviewed in Australia on 5 February 2018
Verified Purchase
Jack Reacher is always entertaining. The short stories leave you wondering but are great for a quick read in the doctors reception.
Read more
One person found this helpful
Helpful
Report abuse
See all reviews

Jim
5.0 out of 5 stars Excellent
Reviewed in the United Kingdom on 27 May 2017
Verified Purchase
A collection of 12 Reacher short stories; the first 6 are around 50 pages the remainder are far shorter. I very much enjoyed reading the stories especially the early ones that introduce us to Reacher as an adolescent. I've read everything that Lee Child has written in the Jack Reacher series - this book stands well alongside the full length stories. Highly recommended.
Read more
42 people found this helpful
Report abuse

Mr. Robert Cook
5.0 out of 5 stars Good old fashioned Jack Reacher stories
Reviewed in the United Kingdom on 7 June 2019
Verified Purchase
To be honest, I have read most of the books featuring Jack Reacher and, after a while, they become a bit repetitive but are usually still a good read, however, this, a compilation of short stories was excellent, the stories were not too long to become the usual repetitive type story but long enough to keep your interest and to keep you entertained.

In fact, there were a few which left you "wanting more" but alas....you can't have it.

To be honest, I would probably be more inclined to re-read this than some of the other books as they were so easy and quick to read.

Apart from 61 Hours - I loved 61 Hours - now there's a film to be made!
Read more
5 people found this helpful
Report abuse

the cat
5.0 out of 5 stars Short and punchy
Reviewed in the United Kingdom on 28 March 2018
Verified Purchase
Time to 'fess up: I like Jack Reacher books, and I don't like short stories. So to enjoy this so much was a revelation. I think it's Jim's short punchy sentences which fit well within the paradigm of the short story. Plus the fact that there's no massive story arc in a Reacher story - he breezes in, solves a puzzle (usually this involves beating people up), packs his portable toothbrush (the only annoying re-occurring theme in the books), and then moves on, regardless of whether he's pulled or not during the course of the story. My favourite story is young Reacher and his brother, because I always felt sorry for his brother (spoiler alert) getting bumped off in the first novel without us getting introduced to him.
Read more
8 people found this helpful
Report abuse

S J Buck
3.0 out of 5 stars A decent collection but...
Reviewed in the United Kingdom on 24 June 2022
Verified Purchase
These stories are a mixed bag for me. A few are very good - like the opening "Too much time", but many I just felt were either absurd or throwaway. Examples of these being "High Heat" (absurd), "James Penney..." and "No Room at Motel" (throwaway).

In High Heat a 16 year Reacher takes on a Mafia type boss, and shows a female federal agent how to do her job. All utterly ludicrous. In James Penney... Reacher only appears (spoiler alert) at the very end of the story. To be honest I thought Lee Child had forgotten he was writing a Reacher story.

I enjoyed them all up to a point, even the rubbish ones, which says something about the iconic character Child has created. So although overall IMO it's not a great collection, I have to admit they were easy to read, and in places a lot of fun.
Read more
Report abuse

Mark Ferbert
4.0 out of 5 stars Danger isnt his middle name
Reviewed in the United Kingdom on 7 April 2022
Verified Purchase
A good selection of short stories featuring Jack Reacher, covering various incidents in his life - including some when he was in his teens.
If you've read the Reacher books, you'll know what to expect from these stories, which give a series of bite-sized insights into his life as the nomadic righter of wrongs.
Probably not a book to first dip your toes into Reacher's world, but if you're a fan, you'll like this collection.
Read more
Report abuse
See all reviews