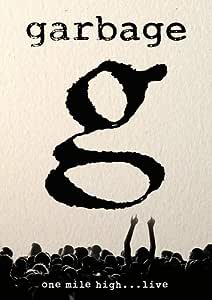 After a five year break, 2012 saw Garbage back in the spotlight with a new studio album Not Your Kind Of People followed by their first world tour for seven years. Filmed on this tour at the Ogden Theatre in Denver, Colorado on October 6th, One Mile High...Live is the first ever DVD release of a full Garbage live concert. Charismatic singer Shirley Manson leads from the front propelled by the twin guitars of Steve Marker and Duke Erikson and the powerhouse drumming of Butch Vig with Eric Avery providing bass guitar for the live shows. The band mix highlights from the new album with classic tracks from across their career to produce the ultimate Garbage live experience.

4.7 out of 5 stars
4.7 out of 5
153 global ratings
How are ratings calculated?
To calculate the overall star rating and percentage breakdown by star, we don’t use a simple average. Instead, our system considers things like how recent a review is and if the reviewer bought the item on Amazon. It also analyses reviews to verify trustworthiness.

nin/ja77
4.0 out of 5 stars GARBAGE - "ONE MILE HIGH...LIVE"
Reviewed in the United Kingdom on 10 June 2013
Verified Purchase
The last time Garbage were on a world tour in 2005 they ended up cancelling the end of their tour citing burn out as one of the reasons, the truth was of course was that tensions were a an all-time high in the band and the chances of them setting off on a world tour again were slim. Fast forward 7 years to 2012 and the band released comeback album "Not Your Kind Of People" and the band once again set off on a world tour which is now documented on the Blu-Ray release "One Mile High...Live".

Recorded in Denver in October of 2012 the band play tracks off all 5 studio albums which if you are familiar with you know sticks to their pop-rock fusion that has served them so well since 1995. The set begins with the trippy dance sounding "Automatic Systematic Habit" which is full of big poppy beats backed by guitars and loads of vocal effects. The bands mixes in the old tracks with the new and play to a packed crowd in a cramped arena. They don't rely on any fancy video screens instead the members take centre stage with fiery lead singer Shirley Manson draped in all black. Some of the older songs get slight make overs most notably "Stupid Girl" and "Only Happy When It Rains". In all the band play a 20 song set with fourth album "Bleed Like Me" only being represented by the superb "Why Do You Love Me".

Off the new songs from "Not Your Kind Of People" the ones that stand out most are the heavy "Battle In Me" and "Control" with its great slow build up and great use of harmonica. The band are again joined by ex-Jane's Addiction bassist Eric Avery. They finish with their very first single "Vow" with its chopped up guitar sound still sounding as fresh as ever. The picture is crystal clear and sound is great, especially in 5.1.

This is Garbage's first official live release and is long overdue and shows Garbage still have a life left in them, also included is a look at how five of the tracks from "Not Your Kind Of People" came to life including "Automatic Systematic Habit", "Control", "Big Bright World", "Blood For Poppies" and "Battle In Me". The two black and white music videos for "Blood For Poppies" and "Big Bright World" are also included.

emma m
5.0 out of 5 stars garbage - maybe the last dance
Reviewed in the United Kingdom on 6 September 2013
Verified Purchase
I last saw Garbage live in Atlanta at the Rocks, Saturday night, August 2005 - they were AMAZING. Get this DVD. It's epic, electric, alive in a way only Garbage fans can understand - it's so good to have them back again, making fabulous music.
Read more
Report abuse

Ben Raisbeck
5.0 out of 5 stars Garbage at the top of their game
Reviewed in the United Kingdom on 2 June 2014
Verified Purchase
I was so pleased when I heard Garbage were returning from their hiatus. I couldn't get to see them live so I was really pleased when they released this DVD. A great live show featuring material from their latest album and old fan favourites too.
Read more
Report abuse

martin evans
5.0 out of 5 stars ok dvd
Reviewed in the United Kingdom on 26 August 2013
Verified Purchase
if you liked Garbage from a few years ago , this is worth picking up. it's nice to see them playing again
Read more
One person found this helpful
Report abuse
See all reviews
Get FREE delivery with Amazon Prime
Prime members enjoy FREE Delivery and exclusive access to movies, TV shows, music, Kindle e-books, Twitch Prime, and more.
> Get Started
Back to top
Get to Know Us
Make Money with Us
Let Us Help You
And don't forget:
© 1996-2020, Amazon.com, Inc. or its affiliates