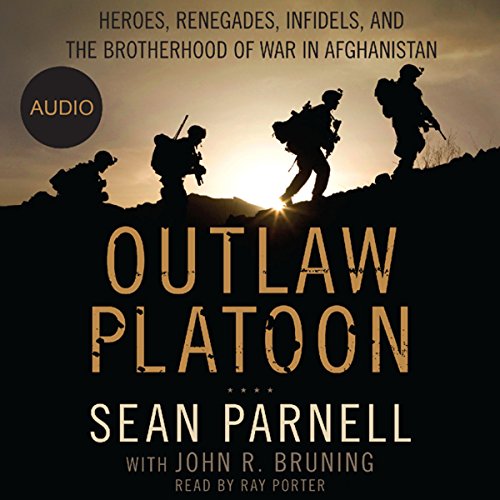 Outlaw Platoon: Heroes, Renegades, Infidels, and the Brotherhood of War in Afghanistan

In combat, men measure up. Or don't. There are no second chances.

In this vivid account of the U.S. Army's legendary 10th Mountain Division's heroic stand in the mountains of Afghanistan, Captain Sean Parnell shares an action-packed and highly emotional true story of triumph, tragedy, and the extraordinary bonds forged in battle.

At 24 years of age, U.S. Army Ranger Sean Parnell was named commander of a forty-man elite infantry platoon - a unit that came to be known as the Outlaws - and was tasked with rooting out Pakistan-based insurgents from a mountain valley along Afghanistan's eastern frontier. Parnell and his men assumed they would be facing a ragtag bunch of civilians, but in May 2006 what started out as a routine patrol through the lower mountains of the Hindu Kush became a brutal ambush. Barely surviving the attack, Parnell's men now realized that they faced the most professional and seasoned force of light infantry the U.S. Army had encountered since the end of World War II.

What followed was 16 months of close combat, over the course of which the platoon became Parnell's family: from Staff Sergeant Greg Greeson, the wise, chain-smoking veteran who never lost his cool; to Specialist Robert Pinholt, a buttoned-down conservative with the heart of a warrior and the mind of an economist; to Staff Sergeant Phil Baldwin, the platoon's voice of calm and reason, a man who sacrificed everything following the events of 9/11 - career, home, financial stability - to serve his country. But the cost of battle was high for these men: Over 80 percent were wounded in action, putting their casualty rate among the highest since Gettysburg, and not all of them made it home.

A searing and unforgettable story of friendship in battle, Outlaw Platoon brings to life the intensity and raw emotion of those 16 months, showing how the fight reshaped the lives of Parnell and his men and how the love and faith they found in one another ultimately kept them alive.

This audiobook is enhanced with a downloadable PDF containing photographs from the hardcover edition.

4.8 out of 5 stars
4.8 out of 5
3,840 global ratings
How are ratings calculated?
To calculate the overall star rating and percentage breakdown by star, we don’t use a simple average. Instead, our system considers things like how recent a review is and if the reviewer bought the item on Amazon. It also analyses reviews to verify trustworthiness.

Mulza
5.0 out of 5 stars Top marks
Reviewed in Australia on 16 September 2018
Verified Purchase
One of the finest and most intimate accounts I've read of the Afghanistan conflict. What these guys, and all men serving outside the wire, had to endure is just incredible. Could not recommend this book enough.
Read more
Helpful
Report abuse

Brian Lloyd
3.0 out of 5 stars Ok read
Reviewed in Australia on 6 March 2020
Verified Purchase
The story was ok but in a lot of the cases was not that exciting.
Read more
Helpful
Report abuse

Craig Warrick
5.0 out of 5 stars Brilliant read
Reviewed in Australia on 14 January 2017
Verified Purchase
First time I have read anything regards the US in Afghanistan. These guys are heroes. Conditions were horrific and their willingness to fight at all costs just amazed me
Read more
Helpful
Report abuse

neil barnaby
5.0 out of 5 stars a true tory
Reviewed in Australia on 3 November 2019
Verified Purchase
This is just an amazing account of Austalian envolment in the last twenty years.
Read more
Helpful
Report abuse

Ernie T.
5.0 out of 5 stars The Sufferance of Protection
Reviewed in the United Kingdom on 14 September 2018
Verified Purchase
Excellent narrative and story of the lengths armed forces have to go to for protection of our freedom and the protection of the locals from oppressive jihadii's and how Pakistan gave help and protection to those that attack our forces with impunity.
Read more
One person found this helpful
Report abuse

Sydneysider
5.0 out of 5 stars brutal
Reviewed in the United Kingdom on 17 August 2020
Verified Purchase
before non front line serving people pontificate on modern wars and politics and morals or anything, read this, carefully, and have a rethink. context is all eh?
Read more
Report abuse

Scruff66
5.0 out of 5 stars Greatvread
Reviewed in the United Kingdom on 6 January 2021
Verified Purchase
This book is a great read, having served for 22yrs in the British Army and served operationally around the world I know what Outlaw platoon have been through.
Those without operational experiences this book is wrote in a way for you to understand a soldiers experience of war.
Veterans this book took me home!!!
Well done Sean.
Read more
Report abuse

jompy
5.0 out of 5 stars A must read , what a book
Reviewed in the United Kingdom on 9 October 2019
Verified Purchase
Wow !
An emotional read ! I've read a number of great books that describe life in a combat zone and this is up there , i couldn't put it down . One of the guys i work with who "never reads" has borrowed it and he can't put it down 😂
This should be on the school curriculum , people should know what these guys go through .
Read more
Report abuse

David 349
5.0 out of 5 stars Excellent read.
Reviewed in the United Kingdom on 17 December 2012
Verified Purchase
An excellent read. Anybody who thinks war is exciting should read this book. It would be good for politicians to spend some time on active duty with these men, there would be a lot less wars. I got this book on audio books and it was hard to put down. I listened to this book while working out in the gym and there were time I had tears in my eyes. I bought the book for my son in law who loves the military channel. I think he might understand a little better. I highly recommend this book.
Read more
6 people found this helpful
Report abuse
See all reviews